This is a continuation of my exchanges with friends in my fb wall on the subject. My comments here are slightly revised from those  origially posted in  fb.
-----------


8. Does the peace agreement say that the MIs are allowed to harbor internationally wanted terrorists?

From the Inquirer report, SAF informed only the AFP around 3am that day, on their way to Mamasapano, 5am they announced that they have killed Marwan, before 6am as they retreated to go back, firefights started, SAF asked for reinforcement belatedly. By 9am, 44 officers were dead. 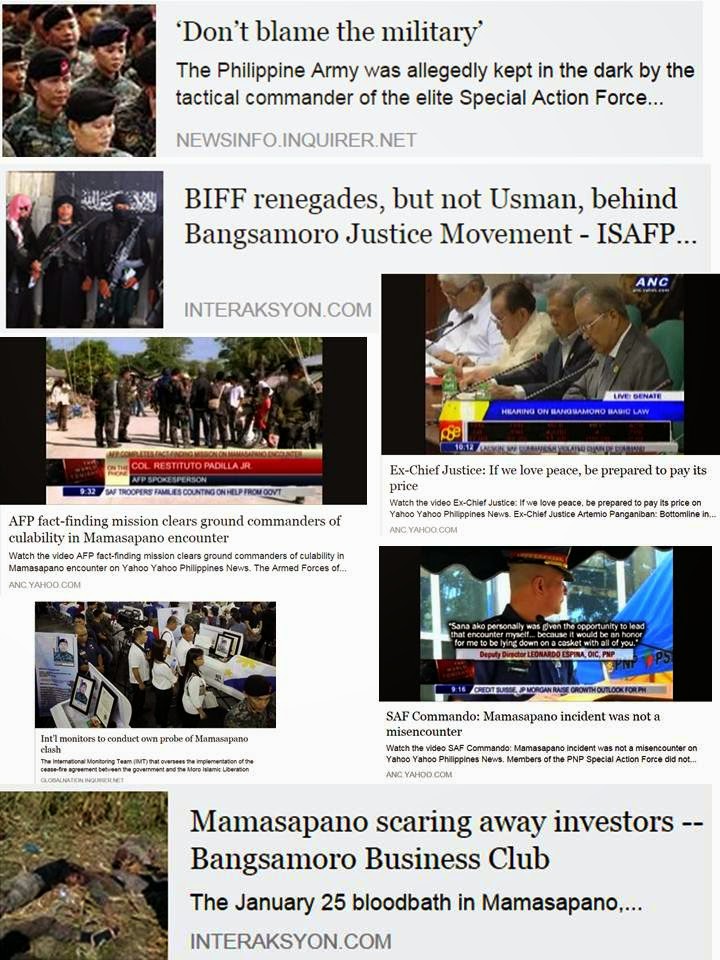 9. That "global terrorism" tagged instituted by the americans is a canard, just so they can justify their hunt everywhere and involved everyone else to their paranoid cause…. Sinasama lang tayo sa global-global terrorism na yan. What we have here are just domestic rebels, brigands and thieves!

I think there is some truth to this assessment. There is high paranoia in  the US government after 9/11 and  hence,  the large-scale  invasion of  Iraq and Afghanistan, among  others. Many of these Islamic militants are just after money, hence the kidnapping for ransom, land grabbing, etc., using religious or political “causes” as cover for their criminal and robbery activities. 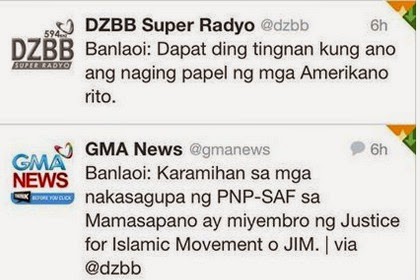 10. It is more accurate to say that many JIM members participated in the firefight with SAF.

12. how you can all justify the brutality committed by these groups against innocent civilians; communities and yes the military and police forces too ...so we should be very grateful they did not strike for 5 years?

Who justified brutality? For me, the main reason why I do not support any war is precisely that any escalation of the conflict will surely, 100%, escalate the brutality from each side. If PNP-AFP kills some BIFF/JIM/other rogue elements, these groups will kill civilians whom they suspect as informers or pro-government.

13. Islam is fundamentally a violent ideology pretending to be a religion.

My friend who said this has visited Jakarta, the capital of the 4th largest country in the  world population wise and most of the people in Indonesia are followers of Islam. I’m sure he did not see or experience violence there, or read continuing violence by believers  of  Islam over non-Muslims like Filipinos, Thais, Singaporeans, etc. People should be careful in generalizing. They may be fanning more hatred and  unwittingly inviting counter-violence in your statements.

14. statistics on how land prices in Mindanao correlate with how many Muslims are in the neighborhood.

I think this news provides some leads.

"The value of investments on hold due to the fighting, in the real estate and agriculture sectors, is estimated at "billions" of pesos...
Malaysian businessmen due to arrive on Monday to inspect sites in Cotabato city have cancelled their trip,... Jordanian businessmen looking to invest in up to 50 hectares (123 acres) of banana farms left abruptly on Sunday without finalizing a deal... Singaporean and Malaysian partners seeking to replicate their mini shopping mall business in Johor Baru said they were postponing their investment." http://www.interaksyon.com/.../mamasapano-scaring-away...

It is NOT the number of Muslims who live in an area that determines business feasibility and land prices. It is the peace and order, the absence (or at least minimum) of shooting and killings. The peace agreement is something that is very useful to have more local and foreign businessmen, more job creations, to come to ARMM and neighboring areas. Now many people want to throw away the peace agreement? Reason should prevail over emotion.

15. prices are depressed because of perception of violence, it would correlate very closely to where the Muslim communities are.

Zamboanga city has a big Muslim population and I think land prices there are higher compared to Catarman in Samar or Oslob in Cebu or other lesser known municipalities in the country which have minimum if not zero Muslim population.

True, and it shows that these Muslim governments can allow facebook, youtube, twitter, gmail, etc. Non-Muslim China or N. Korea will not allow its people to post anti-Muslim, anti-Christian, anti-atheism, etc. because those social media are banned in the first place. So if one is talking about dictatorship and political intolerance, he/she is barking at the wrong tree. Try also posting anti-Hindu comments in certain areas of India, or anti-Buddhist comments in certain areas of Cambodia or Nepal, or even Thailand and see what will happen.
------------