Last month, I attended this conference at Edsa Shangrila. The main sponsors was the Office of the President; were  the five institutes and organizations, including the RSIS in Singapore. All the key speakers were from RSIS.

The speakers in the morning session were Ahmed Hashim, Bilbeer Singh, and Joseph Franco, all from RSIS. Reactors though were all from the Philippines -- Dr. Clarita Carlos, Ma. Antonina Leong, and B/Gen. Carlito Galvez. 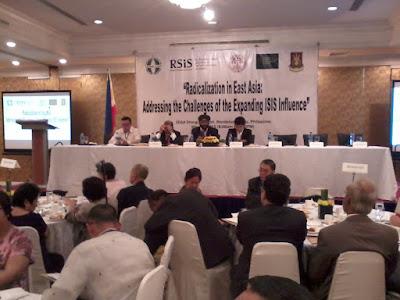 The 3 speakers from Singapore were fine, articulate, but while A. Hashim's paper was good, I was not impressed by the two other presentations. I think their papers were not substantive enough, say compared to discussions by a local scholar on the subject, Rommel Banlaoi.

Nonetheless, they were unanimous in arguing for more diplomatic solution to Islamic militant movement, which I agree. There will be armed or military aspect of course, as some  militants know only one thing -- violence and killings -- to advance their political and/or religious agenda. 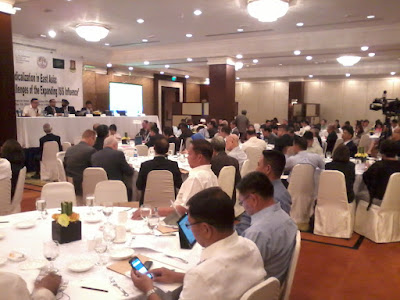 I also do not like the usual equation of radicalism = militance/violence. As Rommel explained in his presentation last year, the most radical thinker may also be the most peace-loving person. To advocate for radical change means to seek ideas that are outside the box, or the person has removed the box. Alternatively therefore, the most militant and most violent person  may also be the least radical, the most old-fashioned and "conserve the status quo" advocate.

Below is a portion of the Executive Summary of the conference prepared by the organizers:

Speakers emphasized the interconnectedness of the events in the different parts of the world to domestic politics and how issues in the island of Mindanao could have implications for the region and the international community. The growing threat of ISIS has been seen as a product of ideology, conflict, and deprivation. Its more radical position compared to other groups need to be seen as an international concern. Southeast Asians are reportedly joining ISIS and they would be dangerous in their return to region. Indonesia, Malaysia, and the Philippines are the most vulnerable states in the region. On the other hand, the instability in Mindanao has implications for the region. The spillover effects of the conflict and the attractiveness of a conflict area for terrorists is a concern for the international community, particularly ASEAN. The interconnectedness of international and domestic factors and their relation to radicalization have been proven in past cases.  It is therefore the opinion of the speakers that there is a need to support the peace process in Mindanao. They see a dim future with the failure of the current peace process in Mindanao.

For me, governments should continue using a combination of reason/diplomacy and armed response. For every armed insurrection or secessionist movement, there are moderates and hard-liner factions always. And often this leads to breakaway groups, which is good. Talk to the moderates, work for a peaceful solution to the conflict. Deal with the hardliner, violent break away groups via armed response until they adopt the moderate approach. And needless to say, governments should keep their house in order, remove the corrupt and thieves within their ranks.

Thanks to Ms. Amina Rasul, President of the Philippine Center for Islam and Development (PCID) and a fellow UPSE alumni, for inviting me to that forum.
------------