Inequality 29, More on Oxfam, squatters and a lamborghini

A friend commented on my critique of the Oxfam paper and said that it is not only Oxfam that questions rising inequality, there are also some reference to the  Credit Suisse report, the last Davos conference saying that inequality as "deepening", and Piketty says the same thing.

My main issue here is against bad math. The numerator, world's top billionaires (numbers from Forbes) is cumulative wealth of the top 80, or top 100, etc. rich individuals, accumulated after 4, 5, 7 decades. But denominator is wealth of a country for 1 year. Numerator will be bloated while denominator is relatively understated, that is why people get quotients like 40% or 60% of GDP, etc.

To compare apples to apples, it should be:

What Oxfam and others lousily did is:

That is why the numerator is bloated, the denominator is controlled. Lousy math.
Here's an analogy. People take the cumulative wealth of the CEO of a company with 200 employees, the value of his houses, cars, investments, other properties, things that he acquired over the past 40 years as an ordinary employee, then a junior officer until he became a CEO of that same company. That's the numerator, it's big because it's accumulated wealth over 40 years.

Then people get that company's gross sales for one year. This method of bloated numerator over denominator = "scandalous inequality" is simply lousy math.

The gross debt/GDP ratio can be comparable because a responsible government would aspire to pay back or retire some debts in period of no economic and financial turmoil or crisis, so the ratio should flatline or even decline after sometime. But most or majority of governments are outright irresponsible, spend-spend-spend, borrow-tax-borrow is their endless motto, thus the ratio keeps rising.

See photo 1 below. Many people say having those tall and flashy skyscrapers in Makati is scandalous or even criminal because there are so many squatters left behind. Are they correct in saying this? 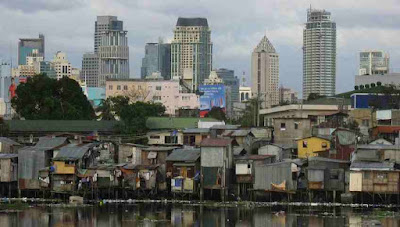 1. In the first place, there should be no squatters in this part of the river, Pasig river. That area should have no structures because that is a river bank, prone to flooding and the people living on those structures contribute to more solid wastes directly dumped to the river.

2. Assuming that all laws (on private property, public property, environmental protection, etc.) are waived and the squatters are justified to live in that river bank. Those structures will greatly improve as the residents there have property rights to the area, there is no threat of being demolished, so they will aspire to build more stable structures.

that society should demonize this, that government should tax ostentatious goods 500%, 2,000% or more as an "equating factor". Are they correct in saying this? 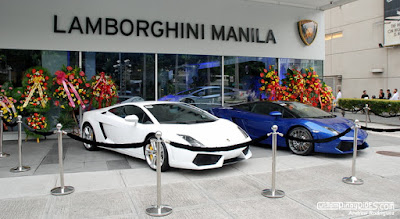 politics of envy, the thinking that no one in this country should drive a lambo, a ferrari, etc. because there are "so many" poor people. Better if everyone is riding a motorcycle or tricycle, there will be equality? Equally poor?

A position in government is often a trap. Rational people become irrational, easily infected by a welfarist, populist, and even socialist thinking. Inequality is wrong so there should be forced equality. Pull down the rich and efficient and subsidize the lazy or irresponsible. Like people who do not want to work, or they work 6 days a week but also drink and party 6 nights a week and have zero savings.

"Trickle down" philosophy is actually from a statist or "worship the state" philosophy. The biggest entity in society is the state and its national and local agencies and bureaucracies. From the state, subsidies and welfare and the moon and the stars will trickle down to the masses.

A friend commented that "To improve I believe we all need to be Smart. Being able to get by with just a "job" is not enough. People don't realize that in a few years computers will replace us. I struggle to figure out which job a computer won't do better in the future."

Right, and many jobs that are done by less skilled workers -- laundry, street sweeping, kitchen dish washing, rice planting and harvesting, cashiers in MRT stations, etc. -- will be done by machines. And many anti-rich, anti-capitalism, anti-globalization, anti-many things will cry out loud in the streets to further raise the government-dictated minimum wage. And this will result in an unintended consequent of more unskilled people who will no longer be hired because the mandatory wages + mandatory social contributions have become higher while those skills are replaceable by machines.
---------------