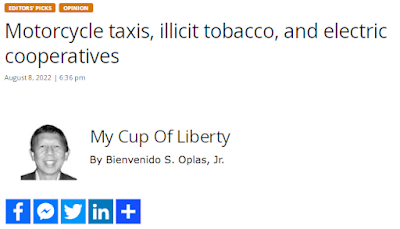 There were four economic developments last week that I want to comment on.

The first is high inflation driven by transport, alcoholic beverages and tobacco (ABT), and financial services.

Last Friday, the Philippine Statistics Authority (PSA) reported the July 2022 inflation rate at 6.4%, another four-year high from October 2018’s 6.9%. Transport and ABT are among the big inflation generators (Table 1).

From transport inflation of 18.1% July, the inflation rates of sub-components are:

As shown in the numbers above, the cost of operating personal transport like cars was very high, 48% in July due to higher gasoline and diesel prices.

Last week, there was this report in BusinessWorld: “Grab PHL says MOVE IT acquisition compliant with rules” (Aug. 8). This is good news.

Currently there are three motorcycle taxi (MCT) companies in the Philippines — Angkas, Joyride, and Move It. The latter is the smallest with just a few hundred drivers, while the first two have at least 15,000 drivers, the cap per player imposed by the Department of Transportation (DoTr) Technical Working Group that includes the Land Transportation Franchising Regulatory Board (LTFRB). The acquisition by Grab PHL of Move It will have many benefits for the public.

One, commuters will have more options, more convenience with three large MCT players to choose. Long lines of people queuing for a ride will be cut shorter.

Two, thousands of new drivers will be on-board — not hired as it is not an employer-employee arrangement. More drivers mean more MCTs to serve the riding public.

Five, the overall inflation rate will be tempered when inflation in transport, especially in operation of personal transportation, is reduced. And people will have more savings.

To further increase competition and passenger convenience, Transportation Secretary Jaime J. Bautista and LTFRB Chair Cheloy Velicaria-Garafil should consider removing two caps — remove the maximum number of MCT players from only three, and remove the maximum 15,000 drivers per player. At a maximum of 45,000 legal drivers, it is very likely that the number of unregistered “habal habal” drivers may be twice or more than that number nationwide. Since they are already existing, they should be onboarded via legal MCT companies, for better regulatory transparency and better passenger safety.

If the two caps are removed, it is estimated that at least one million rides daily can be served by MCTs. Secretary Bautista comes from the air transportation sector where there are no caps on flights per destination per day or per month, so he can appreciate the need to remove the caps on the number of players and vehicles in land transportation.

Last week, Budget Secretary Amenah F. Pangandaman reiterated that they will submit Budget 2023 to Congress on Aug. 22. The thick documents include projected tax revenues and other measures to fund the government’s huge expenditures, including sin taxes.

Eight years ago, now Finance Secretary Benjamin Diokno wrote a column, “Illicit trading of cigarettes rising” (Manila Speak, Oct. 9, 2014; reprinted in one of his four books, Through the Looking Glass, published 2020). He cited Oxford Economics’ estimates of tax losses from illicit cigarettes: P2.62 billion in 2012, and P15.60 billion in 2013. The estimated number of illicit cigarettes was 6.4 billion sticks in 2012 and 19.1 billion sticks in 2013, an almost 200% increase in just one year.

Last April, I attended a webinar organized by the National Tobacco Administration on illicit tobacco and Congressman Jericho “Koko” Nograles was one of the speakers. He shared Euromonitor’s estimates of illicit tobacco as a share of total supply: Nationwide 13%, Zambales 11.5%, Nueva Ecija 22%, Bataan 32%, Palawan 25%, Sultan Kudarat 36%, Zamboanga de Sibugay 51%, Misamis Occidental 57%, some areas of Mindanao up to 60%.

To verify the numbers of the two legislators, I made my own estimate, taking off from the Euromonitor estimate of 13% illicit cigarette share to total supply, meaning 87% is legal tobacco. The numbers I got range from P24 to P49 billion in 2021 alone (Table 2).

High inflation contribution of ABT (Table 1) is mainly due to the steadily rising tobacco tax: P50/pack in 2020, P55 in 2021, P60 in 2022, and 5% yearly increase starting 2023. It is safe to assume that illicit tobacco will only increase, not decrease. With cheap smuggled tobacco, there will be more smoking, not less. And there will be more money for the criminal gangs and their partner corrupt government officials, not less.

Last week, Senator Raffy Tulfo, Chairman of the Senate Committee on Energy, lambasted a number of electric cooperatives (ECs) in the country for the frequent blackouts in their franchise area. I also saw these reports in BusinessWorld: “ERC orders 3 electric cooperatives to refund nearly P294M” (May 31), “Gov’t imposes sanctions on two electric cooperatives” (June 9), and, “Tulfo threatens to summon officials of inefficient power co-ops before Senate Energy Committee” (Aug. 3).

Report number one is about Central Negros EC (Ceneco), Pangasinan I EC (Panelco I), and La Union EC (Lueco) that over-charged their customers.

Report number two is about Maguindanao EC (Magelco) and Lanao del Sur EC (Lasureco) that owe P16.7 billion to the Power Sector Assets and Liabilities Management Corp. (PSALM), a government corporation under the Department of Finance. Magelco owes P3.8 billion, Lasureco owes P12.9 billion and they have not expressed the intention to pay. So, taxpayers have shouldered their unpaid debt -— very wasteful and corrupt.

ALECO, in particular, owed P1 billion to WESM around 2010, it also owed PSALM about P2 billion. In 2014, SMC Global bought ALECO and renamed it Albay Power and Energy Corp. (APEC), and assumed its P4 billion debt. Two years later, the debt ballooned to P5.6 billion. Until now, ALECO or APEC still owe some gencos hundreds of millions of pesos.

Many ECs are notorious for inefficiency, frequent blackouts and/or high electricity rates that penalize their customers. See some of those ECs and compare their rates with Meralco and the National Capital Region (Table 3).

I am sure Energy Secretary Raphael “Popo” Lotilla is doing something to address the twin problems of blackout economics and the fiscal burden of unpaid debt to PSALM and gencos by many ECs.

Check these reports, I just got screenshots from the email service of Net Zero Samirsdat by The Global Warming Policy Foundation (GWPF) https://www.thegwpf.org/. When ecological central planning and government energy rationing prevails, things like these are the results. 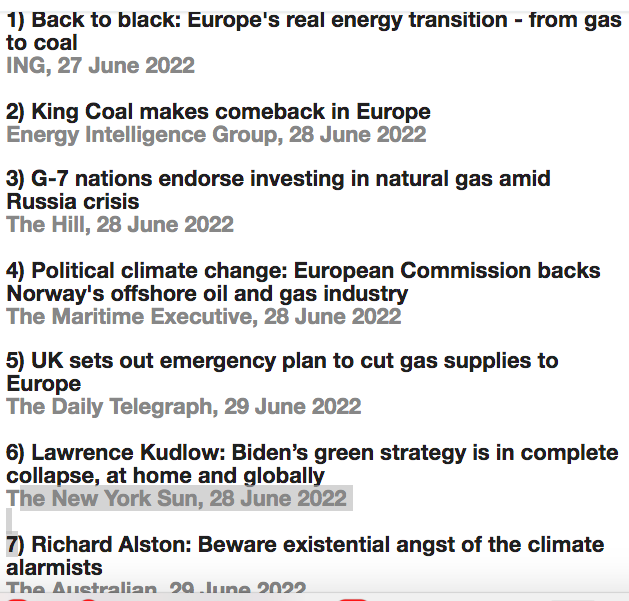 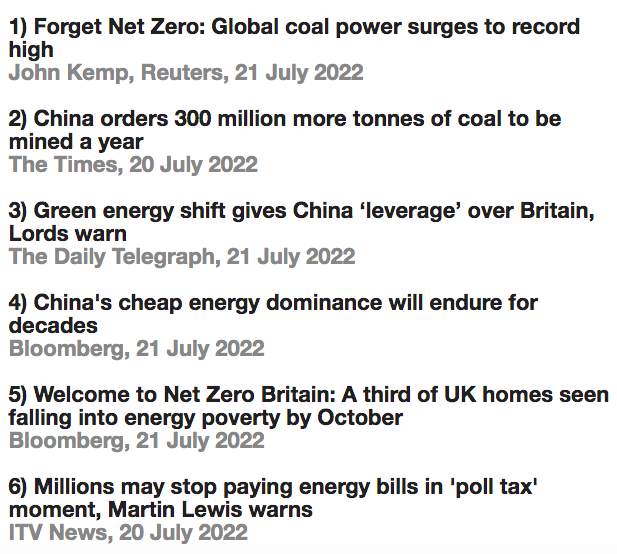 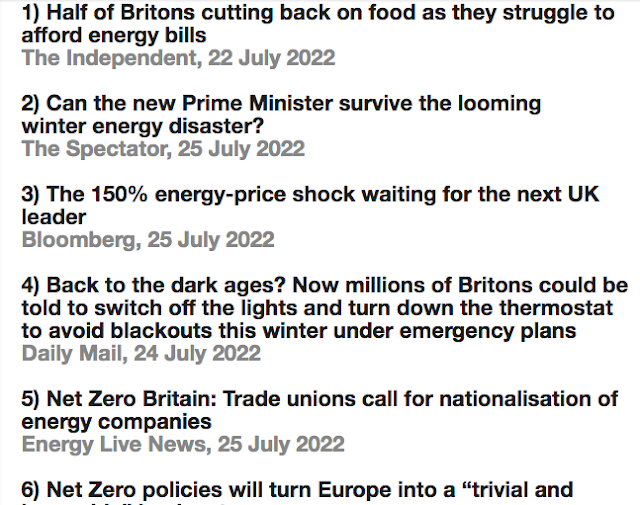 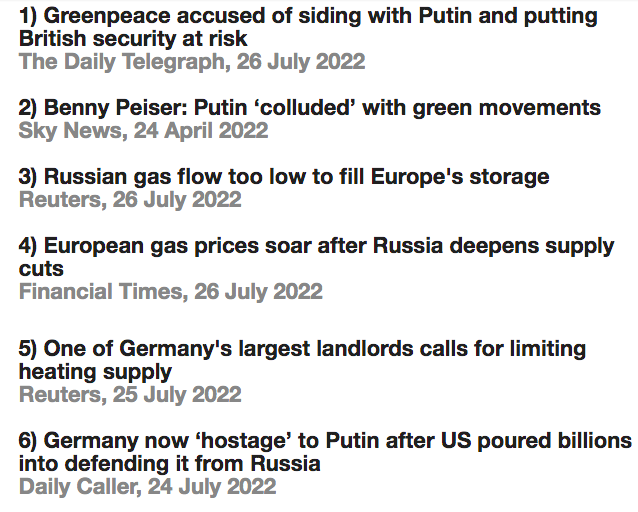 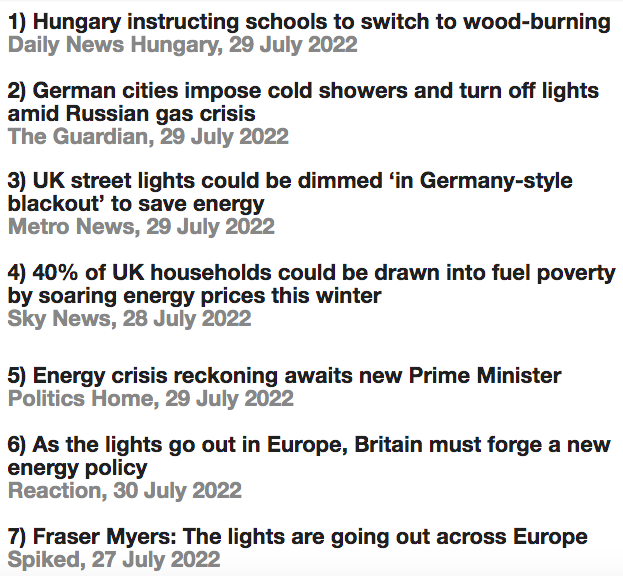 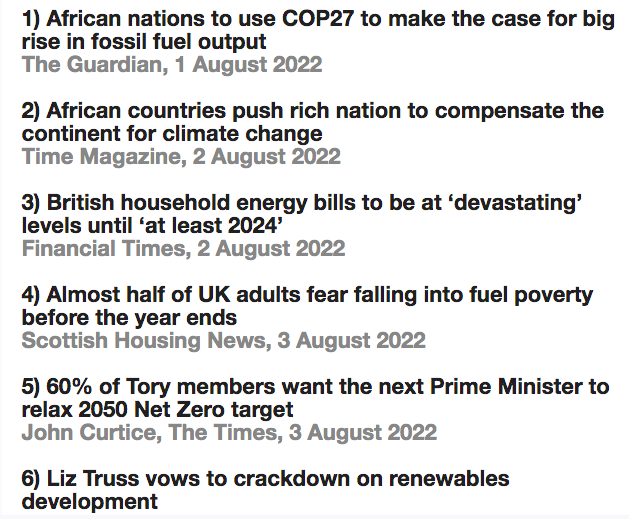 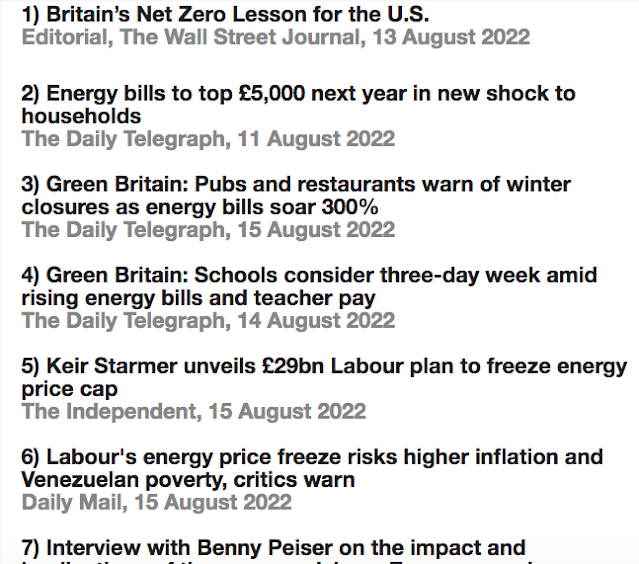 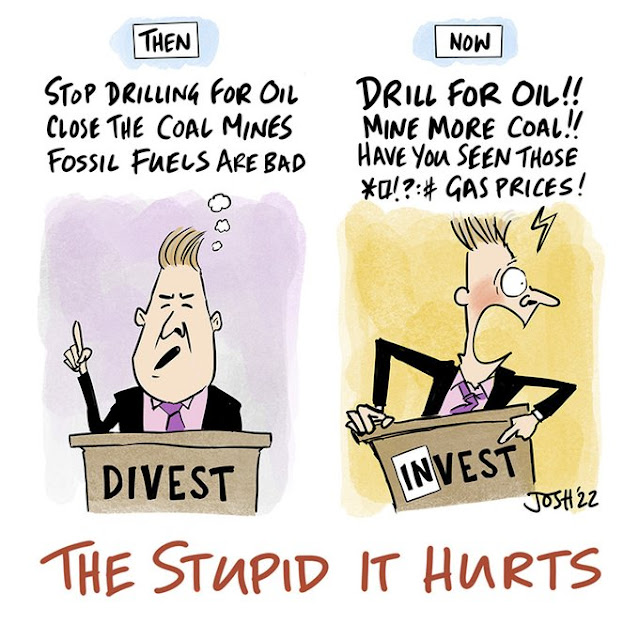 Posted by Bienvenido Oplas Jr at 12:41 AM 0 comments

There were a number of important economic events that occurred last week, I will discuss four of them here.

Last Monday, July 25, President Ferdinand Marcos, Jr. (PFMJ) delivered his first State of the Nation Address (SONA). It was a 3S — sane, statesman, sensible — address by a head of state. No cursing, no threats like “I will expropriate your business” that we heard in the SONAs of the previous administration.

The next day, July 26, there was a big event, the Post-SONA Economic Briefing at the Philippine International Convention Center (PICC). I was invited and I attended it. There were three panel discussions: Economic, Infrastructure, and Social Sectors, and these provided more details that were not elaborated on in the SONA.

A total of 12 Secretaries including VP Sara plus the Central Bank Governor spoke. Plus undersecretaries of some departments. It was a huge event and many corporate leaders, other government officials, and practically all media networks were there.

In a presentation for the Economic team, Finance Secretary Diokno showed the Philippines’ GDP growth trend from 2015 to 2021 and the projections until 2028, and net foreign direct investments (FDI) inflows from 2015 to 2021, extended to January-April 2022. There is a rising trend — good.

These are good trends — except for the deep contraction of 2020, -9.6%, due to the severe and business-killing lockdown imposed by the previous administration.

Budget and Management Secretary Pangandaman made a good distinction and division of labor between national and local governments. Big infrastructure projects by the national government, support and smaller infra by the local governments. And the agency’s “rightsizing” program will complement this new division of labor, not only in infrastructure but also in the social sectors. Some agencies will shrink if they are not abolished, other agencies can expand.

In a presentation for the Infrastructure team, Public Works and Highways Secretary Bonoan showed a map of the Luzon Spine Expressway Network (LSEN) program, a total of 1,213 kilometers of completed, under construction, and proposed toll roads that will reduce travel from the Ilocos to Bicol regions from 20 to just nine hours. Then there are the Inter-island Linkage/Mega Bridge program, including the Bataan-Cavite bridge (32.2 kms) and Panay-Guimaras-Negros bridges (32.5 kms). And the various seaport, airport, and railway projects. Beautiful grand plans that will need fast and sustained economic growth to finance and materialize them.

Energy Secretary Lotilla emphasized the need to have more power plants, a bigger power supply base, and wider or more diversified energy sources. Such energy diversification will include nuclear power and new natural gas via investment incentives to the upstream sector. I support these, plus the additional target to have 100% electrification of households nationwide including far-flung barangays.

The dirtiest and most dangerous power sources are candles and household gensets, not coal and nuclear power plants. A friend based in Calapan, Oriental Mindoro told me that until now they still have blackouts of three to five hours a day, sometimes two times a day — horrible. More candles mean more fires and more destruction of property if not deaths of people. More gensets mean more air and noise pollution.

DECELERATING GROWTH OF THE WEST 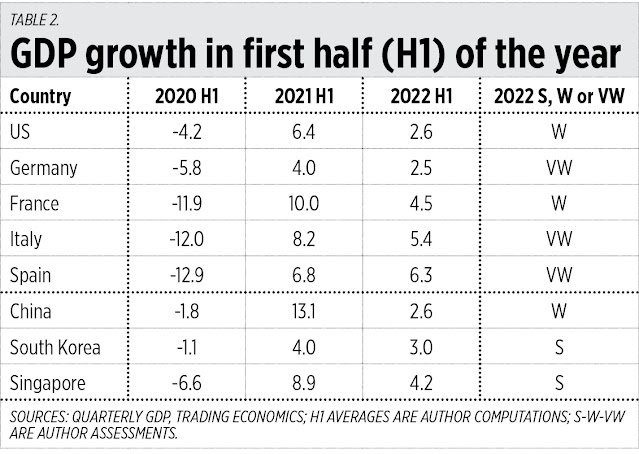 Last Sunday, former President Fidel V. Ramos died at the age of 94. I went back to the macroeconomic numbers during his presidency (July 1992-June 1998), with the last three years of the Cory Aquino administration (1990-1992) as the base period, and compared it with five other major economies of the ASEAN-6 (Table 3).

The Mt. Pinatubo eruption, the big earthquake in Luzon, and major blackouts all occurred in 1990-1991, so growth was adversely affected and supply chains were tangled, so inflation was high. President Ramos was able to make a quick economic recovery in his first three years and reduce the inflation rate. And he sustained the momentum when the Asian Financial Crisis occurred in 1997-1998 — the Philippines grew 3.5% in 1996-1998 while Indonesia and Thailand experienced contractions.