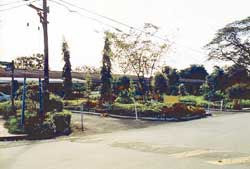 Narra Residence Hall in UP Diliman was the only dormitory for boys. There are three dormitories for girls -- Kamia, Sampaguita and Ilang-Ilang, the rest are co-eds. And of those dormitories, Narra is gone, since several years ago. First it was neglected, then a portion got burned, and finally it was demolished to house the UP Integrated School (UPIS) as the original UPIS campus has been bought by the Ayalas for another real estate project.

I was a resident of Narra dorm from 1983-85. Before that I stayed in Molave (my 2nd year in UP) then Yakal dorms (my 3rd year). Many memories of wild, wacky and other characters in Narra remain vivid in my mind until now, three decades ago. I should write about those memories here in the near future. For now, I am posting a great article written by a fellow Narra dormmate and friend, Fer Cao, originally posted in the Narra dorm facebook group more than a year ago. This is well written, colorful and wacky. Thanks for the permission to post your great memoir Fer.
------------


THE ROMAN EMPIRE IN DECLINE

The thing I fondly miss most about late 80s Narra was the air of pure, unapologetic decadence that must have been like the Roman Empire in decline.

It is something that will greet you immediately while still at the lobby: two old men sitting on ancient chairs acting like gatekeepers to the empire---one a cool, ponderous and word-thrifty Mang Tony while the other, a blustering, cantankerous and full-of-exclamations Mang Willie. They were commanded by a Napoleonic figure---the enigmatic Mr. Bernardo---who would roam his domain with his unsmiling, arrogant glances, stomach out, and one of his hands on his trouser pockets. In my time, there was a sort of unwritten rule in Narra. If you were a novice, you had to defer to the veterans. No matter how tough you were or how intelligent your opinion might have been, you must yield to the frailest looking denizen of the place. Just like in the outside world, a novice must earn time, recognition and respect. I’ve seen rowdy newcomers given their deserved comeuppance by the mayors of each wing. Unfortunately for the novice, most veterans considered themselves mayors of each wing! So you were The Man in Molave? Go fuck yourself, pussy, this is Narra! Now go back to the end of the line!

Narra was an amalgamation of tribes not mutually exclusive of each other---the fratmen, the basketball guys, the degenerate sugarols, the regional buddies, the Pink sisters, the tropang malilibog, the freespirits, artists and bohemians, the Muslim brethren, the grim-and-determined activists, the plain weird and goofy, the sleep-deprived law and masteral students, the vet students and their horrible experiments, the trippers and their stashes, etcetera, etcetera…

All of which make up the dreaded Narra Gauntlet. Each year, candidates for the various positions of the University Student Council (USC) tour the dorms, present their platforms and campaign for votes. Narehans love to make candidates squirm, fumble with answers and blush with embarrassment with pointed questions and arguments that pierced many a veneer or pretension. In my time, the most dreaded questions usually come from the oldest among us who’ve nearly seen it all. I can’t remember all their names now but one stands out---Clifford Espinosa, presently a famous wood sculptor, he with the infamous smirk, leer and lilt that curses you without uttering a single expletive yet. And this is just coming from the guys opening their mouths! The rest of the gauntlets are as equally bloodthirsty with their sporadic howls of maniacal laughter at something even remotely funny or embarrassing. So what about those decent looking guys over there keeping to themselves? Don’t be fooled--- they’re fantasizing about you right now in a victory joe position! Thus, in all my time at Narra, I rarely saw the prettiest or the sultriest USC candidate drumming up enough courage to face the Gauntlet.

Over the years, I toured the rooms and wings of Narra like some curious cat: here and there, left and right, up and down until I reached the pinnacle of decadence itself, the city of Rome in its full bacchanalia---the so-called Lean Alejandro Room!

Upon opening the door of this venerable place, one immediately senses that battle-scarred Roman legionnaires live there---what with the spoils of war strewn everywhere and left to rot like some ancient science experiment. As one enters further, prized war booties adorn the place----a refrigerator here, a PC-XT there, a television and a Betamax on the side, and a roommate’s bratty girlfriend sitting at his bed like some barbarian princess with her pout and nonchalance. I happen to know then that Lean Alejandro knew how to have fun while residing at this room but I firmly believed NEVER this kind of fun!

I had many “regular roommates” at this room who were all characters of sorts. One was a lovable, creepy artist whom I called then as “paniki” because he would sleep all day long and be full of energy and weird, unintelligible mumblings at night. Of course he is a famous rockstar now, hehe. The other was a silent guy who had a picture of Dawn Zulueta at his table with matching handwritten dedication which I have always wondered if it was real. Anyway, this guy would have given Efren “Bata” Reyes or Django Bustamante a run for their money for his par excellance billiard skills. And the last one is a character who is a class all by himself. At first glance, this guy looks like a fearsome warrior---tall, bulky and with a swagger that loudly announces get out of my way! He must have foresworn never to clean up anything in his life, kept a deadly arsenal in his locker, and was a well-known legendary prankster of the wing we were in. One time, he showed me the latest items in his arsenal and must have kept a mental note of my wince when I saw a hand grenade sitting lazily at his contraband. Several days later, while me and my “irregular roommates” were chatting lazily at the landing in between the wings, this roommate arrived with his customary briefcase (he was also a law student). He sat down, joined the conversation and put down the briefcase right beside us. Suddenly the briefcase fell on its side causing a loud thud that most briefcases do. All of a sudden my roommate was scampering away as if his dear life was dependent on it! What were we to do but scamper away also like fear-crazed monkeys! Several meters away and lower adrenalin levels later, we saw this roommate dying of laughter at our reaction! While laughing too at ourselves, we all vowed to get even!

And get even we did. We soon learned that despite his intimidating demeanor and more-intimidating cache, this particular guy was terribly afraid--of all things!---teeny, weeny spiders. Edyll Bulanan, who was an equally-notorious prankster himself, soon got a small, dead spider and got us in on the prank. He put it on the guy’s table and covered it with several xeroxed notes. We all left the room and waited in the adjoining one. In a matter of minutes, our roommate arrived, fresh from the Law Library. I even remember he was in a good mood as he was whistling his tune. Suddenly we all heard what we were all dying to hear: a loud, primal scream---“YAHHHHHHH!”---and the hurried banging of the door! We all came out crutching our stomachs laughing at his comeuppance and laughed some more as he started to run after Edyll in the hallway…