* This is my article for the June 2013 issue of the business magazine in Kathmandu, Nepal. The person in the cover is a friend, Robin Sitoula, President of a free market think tank in Kathmandu, Samriddhi Prosperity Foundation.
-------- 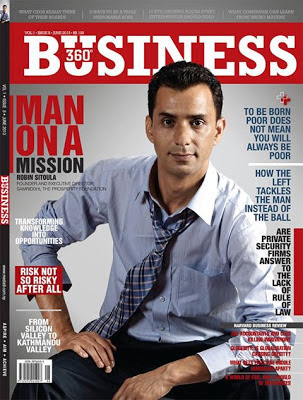 If people are left alone to buy or sell something, they would wish that they are given full freedom to choose their buyers and sellers. They would not wish some external bodies to tell and prohibit them from trading with certain groups of people or economies.

In the Asia-Pacific area, the Asia Pacific Economic Cooperation (APEC) was created in 1989 whose   “primary goal is to support sustainable economic growth and prosperity in the Asia-Pacific region….by championing free and open trade and investment, promoting and accelerating regional economic integration, encouraging economic and technical cooperation… ” (APEC Mission Statement)

This is the biggest economic alliance in the entire planet because it includes huge  economies like the US, Japan and China. Then there are certain  political agenda by some member-governments that are not fulfilled, and new groupings were created.

The RCEP is composed of 10 member-countries of the Association of South East Asian Nations (ASEAN) + 6 countries.  PNG, HK, Taiwan and Russia are the only APEC member countries that do not belong to either TPP or RCEP.

In South Asia, there is the South Asian Association for Regional Cooperation (SAARC).

SAARC was formed to promote peace, stability, progress and economic cooperation in the region. Among the mechanisms to attain this goal is the establishment of the South Asia Free Trade Area (SAFTA) where traded goods among member-countries will have zero customs duties by 2016. Another mechanism is the SAARC Visa Exemption Scheme for certain groups of people like high government officials, businessmen, media and athletes. These moves are laudable and will definitely have a positive impact in confidence-building and further economic integration among the people of the neighboring countries.

While RCEP was Japan-initiated, there is growing perception that China is rising in leadership. And while TPSEP was New Zealand-initiated, the expanded TPP is now seen as being led by the US.

By creating and expanding the TPP, the US may have weakened APEC as Asia-Pacific countries are now divided between TPP or RCEP members, except for a few that are members of both economic blocs.

For a country like Vietnam, it can use the TPP to counter what is seen as China's weight on its border, and use RCEP for economic trade and diplomacy with China. So Vietnam will be able to walk a balance between the US and China.

People in the ASEAN are looking up at the Asean Free Trade Area (AFTA) of zero duties among member-countries by 2015. This is a common market of around 700 million people or slightly higher than the combined population of the US + EU. RCEP is looking at a semi-FTA among the 16 countries by 2015.

It sounds ironic that state-run economies like China and Vietnam can integrate themselves in a free trade and free market landscape. But they are playing with global capitalism, of a highly globalized trade, tourism and investments by people. So those socialist governments must abide by having zero import tax for certain goods from certain countries.

Some national laws and taxes like a domestic sales tax or value added tax (VAT) can distort a free trade policy. For instance in the Philippines, while most imported goods are levied with zero to three percent import duties, they are slapped with 12 percent VAT and that immediately raises the price of previously cheap imports. Lots of oil smuggling in the country for instance, is done not so much to avoid the one or three percent import duties for oil products, but to avoid the 12 percent VAT.

People from different countries should  consider the policy of unilateral trade liberalization over the long-term. Trade with no political preconditions, no prolonged trade negotiations and disputes. People on average just want value for their money when they buy something. They do not require various conditions and regulations to be put in place before they trade. Only governments do.

A unilateral trade liberalization policy like that in Hong Kong is the best option to sanitize trade from politics and politicians. All goods and services are allowed at zero tariff, except for a few regulated items like guns, bombs, poisonous substances, fake medicines, and disease-tainted meat and crops like during bird flu and related outbreak. 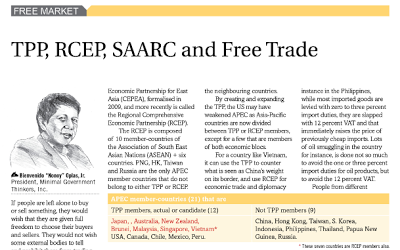 We are far from that ideal though. So we have to live with the reality of continued intervention by governments in trade. And those trade alliances – AFTA and RCEP in East Asia, SAFTA in South Asia, and TPP for US-invited economies in the Pacific – are better than economic nationalism and protectionism.
------------