Government price control is price dictatorship. It is wrong, messy and ugly.

Explore new data below, 2,500+ words, nine pages long including seven tables and one graph, get your favorite drinks and enjoy the ride.

Price comparison across countries of certain goods and services is useful both for public and private decision making, provided that people are using the appropriate and verifiable conversion factors. Otherwise, the comparison can only lead to confusion, not education, and can lead to wrong public policy formulation.

After my reply to the email of James Auste, head of the Cancer Warriors Foundation (CWF), to all members of the DOH Advisory Council on the Implementation of RA 9502 (Cheaper Medicines Law of 2008), see Drug Price Control 32: Policeman of Pharma Companies, Dr. Melissa Guerrero of NCPAM-DOH iinformed me that prices of anti-cancer drugs in the Philippines remain expensive and out of reach of many Filipinos and offered to show the data. I was happy for her offer, and after several emails, she sent me the data. Posting these with her permission, as they plan to post this also in the DOH website, for transparency purposes. Thanks a lot for the data, Doc Melissa. 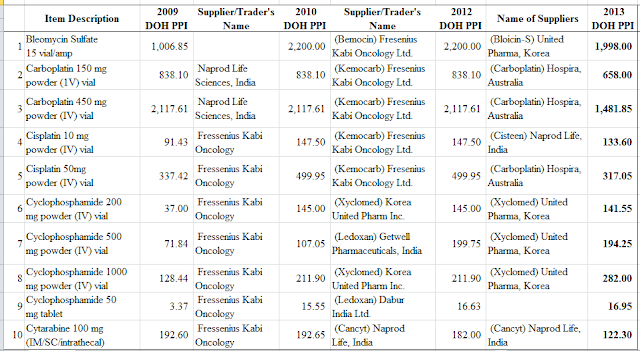 Here are the other 11 drugs. 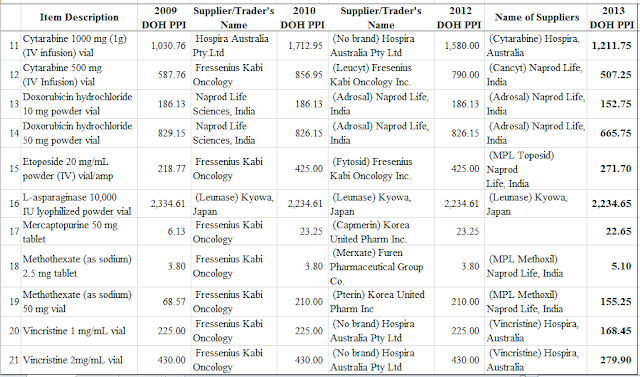 Before I show the price comparison of the above medicines among the Philippines, Thailand and India, I warned readers in my previous article that there is No Single National Price for most if not all commodities like medicines in a particular country. There are many sellers catering to particular customers and buyers and thus, have different prices for the same product made by the same manufacturer.

Consider these two graphs below for a particular medicine. Equilibrium points (where supply meets or intersects demand) A and B are prices in the pharmacies of the high end hospitals in Metro Manila like Makati Med and St. Lukes; C and D are prices for cheaper hospitals; E and F are prices for the big drugstores like Mercury and Rose or Watsons, G and H are for The Generics, Generika, and points I, J, K and so on are prices of the smaller drugstores.

Thus, one can make a table of price differences not only between the Philippines and Country B or Country C, but also among different drug outlets and retailers within the Philippines. There is NO national price for a particular commodity in one country. Only the price of the biggest retailer or second or third biggest retailer, as proxy or estimate of the prevailing price in a country at a given point in time. 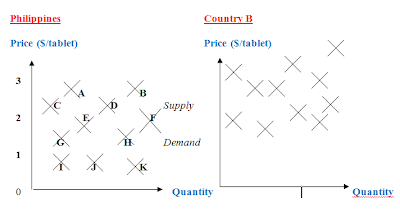 So for inter-country price comparison to become meaningful and verifiable, I suggested that  one
must show, or at least consider and mention the following:

(a) same or comparable retail outlet, say only from Watsons;
(b) same reference period, say June 15, 2013;
(c) exchange rate used for converting different currencies into a common currency on a particular day, say as of June 15, 2013;
(d) taxes and fees, national and local, applied on medicines;
(e) subsidies or mandatory discount, if any, applied on medicines;
(f) other factors.

When those verifiable factors are not shown or even considered, then the price comparison becomes less effective as the readers would only blame the country with the higher price, especially the drug manufacturers and/or drugstores.

It is possible that drug manufacturers and pharmacies in country A would have higher profit margin than those in countries B and C, even if they have lower retail prices than their counterparts in B and C.

How? When the government in country A (a) does not impose taxes on medicines, (b) has lower corporate income tax and other business taxes than in countries B and C, (c) directly subsidizes a particular medicine so that it can be sold at a lower price, (d) other factors.

With that caution, here now are the price comparison for the Philippines, Thailand and India, for the 21 medicines purchased by the DOH. The current market price for the Philippines referred here is the price of Mercury Drugstore (it corners about 60 percent of the total retail pharma market in the Philippines) and an undisclosed "big private hospital".

Note #7 though, even the price in Thailand is about 6.5x higher than that in India. Any of these factors can possibly explain: (a) that medicine is under mandatory and forcible big price control in India, (b) that medicine is subsidized and sold by a government-owned drugstore in India, (c) that medicine is non-patented in India and is manufactured at very low cost by any of its thousands of generic producers, (d) other factors.

In the second batch of medicines below, note #20, Philippine price is 8.7x while Thailand price is 4.6x higher than that in India. The above possible explanations may also apply here.

The price comparison would have been more level or glaring if medicines are bought in the same multinational drugstore, like Watsons. 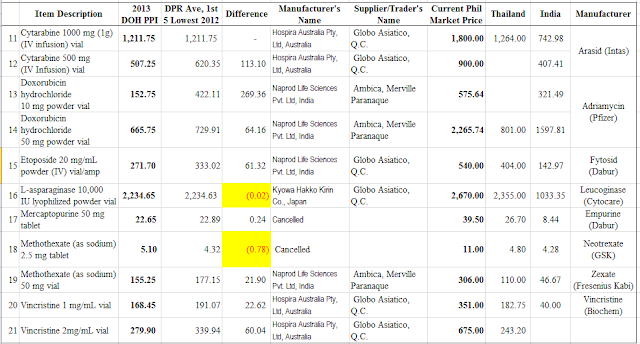 The second list of medicines sent to me by Doc Melissa is for breast cancer. There is a substantial price decline for all the eight medicines except #1, I wonder why since it is the same supplier as in 2012. Maybe a typo error, P94 instead of P194? 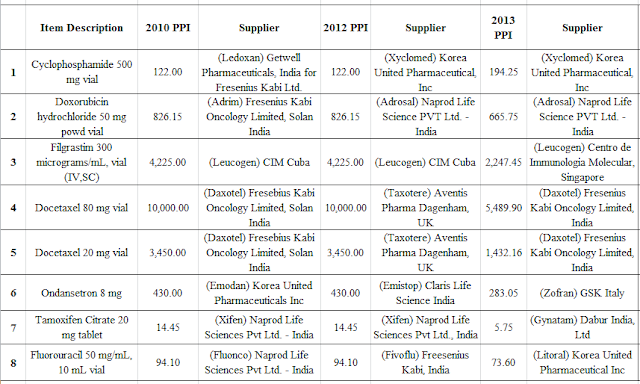 Below, note #4, Docetaxel 80 mg vial. It was procured by the DOH from Sanofi at only P10,000K per vial last year, then procured from Fresenius at only P5,500 per vial this year. But if one will buy that medicine from Mercury or that undisclosed big hospital, the price is P40,568. 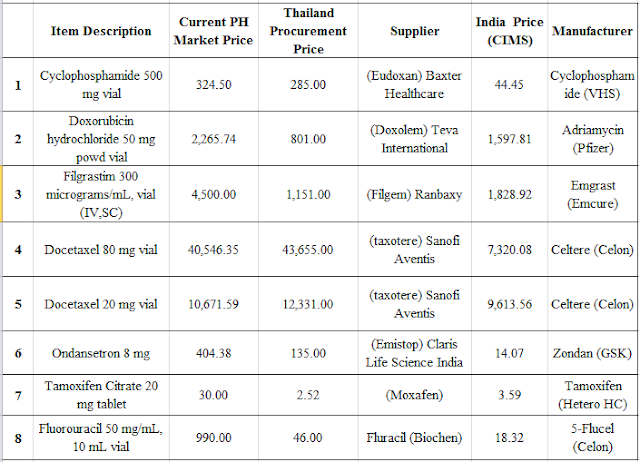 Why a huge price by Mercury/hospital? Only the company can provide the answer/s, but some possible explanations are: (a) Mercury/hospital is selling a new brand by an innovator company other than Sanofi, (b) lots of women senior citizens (automatic 20 percent discount + 12 percent VAT waive = 32 percent mandatory price discount) are buying that drug, so it is passing the price to the non-senior citizens female patients. Or (c) Mercury/hospital simply wants a huge mark up because it is a highly popular medicine.

But wait, Philippine price is actually lower than that in Thailand, sold at P43,665. Only India has a low price.

One problem in the Philippine health sector is the existence of a black market in medicines dispensing by some Filipino physicians themselves. Even the DOH does not know the prices of cancer drugs dispensed by oncologists to their patients. So the price of the same medicine by the same manufacturer can vary from one physician to another. I understand that it is against the pharmacy law, or medical law, for doctors to dispense medicines, they can only prescribe.

The DOH considers this case of market failure for some oncology products, so it has created an access program for poor patients. At those prices, even middle class and some rich patients would wish they can get those cheaper DOH-procured medicines. To avoid suspicion that the DOH officials may actually be giving those cheaper medicines to non-poor patients, the DOH should publish the names of the recipient patients. But this will violate patient privacy. Some patients will not admit publicly that they are suffering from cancer because it will affect their career, or might cause depression among some family members and friends, or various reasons.

Finally, we keep hearing from some sectors and individuals that we should emulate India’s pricing as they have among the lowest medicine prices in the world and hence, by implication, people there have better health outcome. Is this so? Check this simple table to separate illusion from facts.

Table 7. Some Basic Health Indicators for Thailand, Philippines and India

Even if medicines are ultra cheap in India, one’s chance of dying young and early is higher there than in the Philippines or in Thailand. There are many factors for better health outcome other than cheaper medicines. But some sectors have taken the ideological position that multinational pharma companies and global capitalism are evil, so the solution is more government intervention, and move to healthcare socialism.

The kind of more government price intervention in medicines is three-pronged One is by expanding the existing drug price control (or maximum retail price, MRP) policy by covering more drug molecules. Two,  by expanding the mandatory price discounts for senior citizens and persons with disabilities (PWDs) to other sectors like solo parents. And three, raising the forcible price discounts to 50 or 75 percent for centenarians.. Again, guys, dahan-dahan lang. If you get what you wish for, you will simply regret it because socialism is a lousy, inefficient and dictatorial system that only dictators and highly insecure people would love to become leaders of that society.

Back to James Auste of CWF. Yesterday, he emailed to various yahoogroups including CHAT’s, then to all DOH Advisory Council members. He recalled that during the 16th meeting of the Council (February 14, 2013), there was a proposal by some (not all) innovator pharma companies to raise the price of their medicines, at least those not covered by EO 79 issued by former President Gloria Arroyo. He opposed this during the 17th AC meeting (June 14, 2013). Instead, he asked that all multinational pharma companies should submit to the AC their audited financial statements submitted to SEC, to see if they are indeed losing money to justify raising the price of their medicines that were affected by the price control policy.

He actually left early during the 17th meeting, so when DOH UnderSec. Madz Valera later called that issue in the agenda, it was not taken up because the proponent has left. Yesterday in his email blast, he argued the following:

At the CHAT yahoogroups, I replied to him and pointed out that Unilab is the biggest pharma company in the Philippines. It corners about 25 percent or 1/4 of the total Philippine pharma market. The 2nd, 3rd, 4th -- GSK, Pfizer, MSD I think -- have combined share of around 21 percent or lower than the market share of Unilab.

Note also that in his data above, #s 1, 8, 9 and 18 are drugstores, local drug retailers and not multinational pharma companies which are the object of his criticism as having very high revenues.

For public interest groups, NGOs and other CSOs that advocate certain policy measures, it would help if they do more serious research before they open their mouth. There are alternative sources of data, like (a) company websites, they normally publish their financial statements; (b) BusinessWorld’s Top 1,000 Corporations, available in bookstores or in some university libraries, (c) SEC, maybe write a formal letter of request, (d) DOH or MeTA Philippines presentation papers, (e) Center or Institute of Public Health in some universities (UP, Ateneo, La Salle, UST, etc.), others.

For patients and other people who keep asking for more subsidies, more welfare from the state, they should be happy and thankful for those big corporate taxpayers, instead of demonizing them. Government is a penniless institution that becomes rich and powerful only from the taxes that it collects from the people, individuals and corporate taxpayers alike.

Government price control is wrong. Whether we are talking about cellphones, computers, clothes, mangos or medicines, price dictatorship is wrong. What the consumers should demand from government, is to further liberalize the economy, so that more producers and suppliers, more manufacturers and retailers, will come in and do business in the country. Then consumers will have more choices, more options. If they complain of high prices by one seller, no need to rally in the streets or make political noise and call for government price dictatorship. Simply walk away and go to the next supplier who can sell at a lower price, easy.