This coming June 18 afternoon, the DOH Advisory Council (AC) for the Implementation of RA 9502 (Cheaper Medicines Law of 2008) will hold its 17th meeting. The Council has been meeting since 2009 and has conducted 16 meetings so. I am one of the AC members and have joined the meetings since its 4th or 5th meeting in June 2009. Below, a photo during the 16th meeting last February14, 2013. 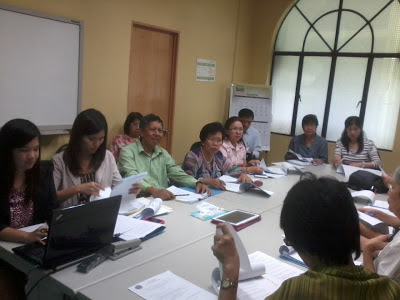 The DOH’ National Center for Pharmaceutical Access and Management (NCPAM) is providing technical and secretariat support to the AC, headed by DOH UnderSecretary Madeleine “Madz” Valera. The DOH has its own set of agenda for discussion and consultation with AC members, but it is also soliciting items for discussion from AC members, any issue they wish to be discussed and clarified at the meeting. This is a good and healthy process.

One AC member, James Auste, the Executive Director of the Cancer Warriors Foundation (CWF) and brain cancer survivor, is suggesting that the drug price control, officially called Maximum Retail Price (MRP) in the law, be expanded to cover more medicines.

In an email to all AC members, he wrote,

That MDRP should increase not the price but the list of medicines  He also requested that pharmaceutical companies should submit (to him or the AC?) a “detailed SEC-approved financial report for the past five years, so that they can study if those pharma companies’ income has declined or not because of the MRP policy, as he sees that in the Top 500 companies, almost all respected companies are included.

They also want to see (a) shipment cost if imported, (b) customs duties if paid, (c) storage cost if under Zuellig, (d) delivery cost from Zuellic to pharmacies and drugstores, and (e) administrative cost.

Wow. The CWF wants to be sort of a policeman of pharma companies. And it is not clear if they wish to be that copper even for local and generic pharma companies. That "MDRP" by the way is an illegal term coined by former DOH Secretary Francisco Duque and Malacanang under former President Gloria Arroyo. The original provision in RA 9502 is MRP but Malacanang did not like it to mean "Mar Roxas for President" then so they invented MDRP.

I replied to him in the AC email loop, ie cc’d all other members, that what he is suggesting is to go back to the old debate where no one in the AC except him supports a lousy drug price control aka MRP policy. So many AC meetings in the past have been held where  the subject was discussed, where people from the national and generic pharma companies, the Philippine Chamber of Pharmaceutical Industry or PCPI (Joey Ochave, Past Presidents Edward Isaac then Beau Agana), Philippine Pharmacists Association (PPhA, President Leonie Ocampo), Watsons (Lyle Morrel and Bell Pesayco), Pharmaceutical and Healthcare Association of the Philippines (PHAP, Exec. Director Reiner Gloor, Director Art Catli), Drug Stores Association of the Philippines (DSAP, Past Presidents Jo Inocencio, Celia Carlos) and other groups have spoken with only one message -- drug price control policy is wrong. That medicine prices were coming down even before the policy was imposed because of the rising competition among more players with more products introduced.

I told him that by continuously insisting on this lousy policy, either he was absent or he was not listening and closing his ears in those meetings.  So I gave an unsolicited advice, the CWF should produce a study, even elementary study, comparing prices of certain anti-cancer drugs, say from 2005 to 2013, and show that their prices are indeed NOT falling. Show the numbers, show charts, so that their arguments will have more substance and not hollow.

The AC meeting on June 18 is their chance to show those numbers and charts. I am sure that NCPAM will grant them several minutes to present their paper and numbers, to convince the AC members that drug price control is not an idiotic policy  The AC is a place for dialogue and debate if necessary, not a place for sloganeering and flag waving.