Today is part 2 of the oral debate at the Supreme Court between the anti-corporate mining groups led by former Party-list Congressman Teddy Casino and Congresswoman Risa Hontiveros, and the Chamber of Mines of the Philippines (COMP). The former simply wants the government to confiscate as much money and revenues from the big mining corporations as possible because of their exploitation of the country’s mineral and forest resources, while being silent about similar exploitation by  the so-called “small scale mining” groups and individuals.

While data on various payment in taxes, fees, royalties and penalties made by large mining companies are available (See Mining Taxation and Government), there is zero data available for taxes and other payment by the small scale metallic (gold especially) mining. See also this comparison of mining taxation policies of Chile vs. the Philippines. 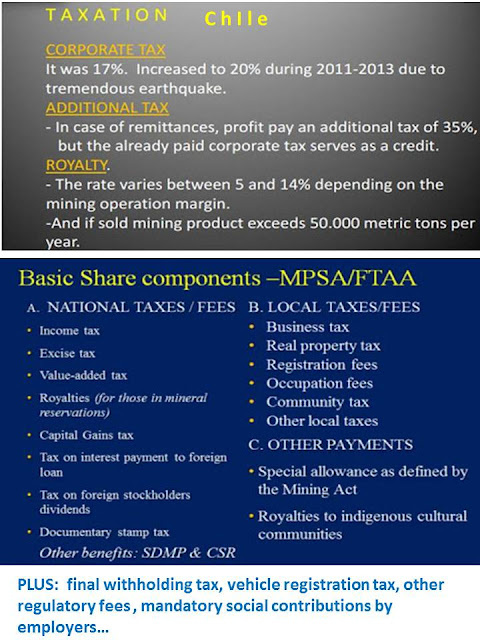 The petitioners want the SC  to declare Secs. 80 and 81 of RA 7942 as unconstitutional and then what, the SC will make its own tax rates in mining and insert them as the new Secs. 80 and 81 of this law? Can the SC legislate taxes and tax rates? This is not possible unconstitutional itself because such function is assigned by the Constitution exclusively to Congress, the House and Senate crafting a synchronized bill, and must be signed by the President.

I am wondering why these ex-legislators simply cannot wait for the new 16th Congress to convene just four weeks from now and introduce an amendment to RA 7942, say government should get 90 to 95 percent of the net revenues of big mining companies and go for explicit mining socialism. Teddy Casino and Risa Hontiveros are socialists anyway, I do not think they will deny their affinity with near- or full-socialism and have social and economic equality in society, demonize and over-tax the rich, over-subsidize the poor including the lazy and irresponsible.

Below are some news reports on this subject. 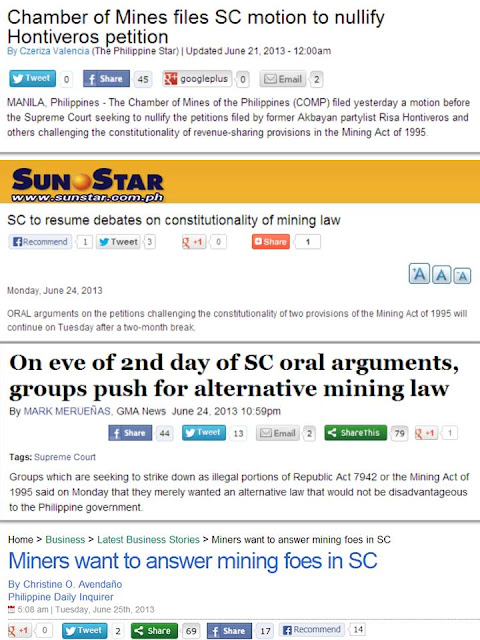 COMP argued that since the La Bugal ruling – the longest in Supreme Court history which took six years for the high tribunal to deliberate on – there has been no material change in the circumstances of the Philippine mining industry.

“There is no compelling reason for the high tribunal to abandon its previous ruling,” COMP said in its motion.

Sec. 81,on the other hand, limits the government’s share in Financial and Technical Assistance Agreement  (FTAA) to taxes, fees and royalties.

COMP said about P173 billion ($4 billion) in mining investments have been poured into the country since 2004 following the high court’s ruling, making the industry a significant contributor to national development, added COMP….

Debates started last April as the SC wanted to know whether the mineral production sharing agreement (MPSA) is unconstitutional for allowing an inequitable sharing of wealth (Section 80) and the government surrenders control and beneficial use of mineral resources under the financial and technical assistance agreement (FTAA) under Section 81.

The Chamber of Mines of the Philippines (COMP)… also said an equitable revenue sharing in mining is a question for the legislative and executive branches of government to decide....

In a press conference in Manila, Erwin Quinones of the SOS-Yamang Bayan, one group opposed to the law, said that they wanted an "Alternative Minerals Management Bill", in which mining activities are "regulated and needs-based."

Quinones said the alternative mining law should also pave the way for the creation of a "minerals management council" that would ensure the Philippine Government's interests are protected.

"In its present form the so-called revenue regimes of the Mining Act reveals that with its many fiscal incentives and tax holidays, it is a one-way assurance for mining companies get their profits while the Government and the Filipino people bear the brunt of the social and environmental risks," the groups said.

… In its 38-page comment in intervention, the Chamber of Mines asked for the dismissal of the petitions for certiorari and prohibition filed by Hontiveros and her copetitioners, citing three reasons.

These were: That the arguments raised by petitioners had already been passed upon and disposed of against petitioners in the case La Bugal-B’laan Tribal Association v Ramos, which the Supreme Court made a landmark ruling; that the high court should stand by its ruling here; and that the legislative and executive branches should decide on the question of what is an equitable revenue sharing from mining.

The chamber also said the petitioners had not shown any compelling reason to abandon the La Bugal B’laan case as it described their arguments to be a “mere rehash of those already overruled” in the same case.

It also held that there was no actual case or controversy in which to relitigate the case and that petitioners did not complain that they had been injured because of these provisions.