Yesterday, exactly one month from the May 13, 2013 elections, the Friedrich Naumann Foundation for Freedom (FNF) Manila office held a good conference, "Liberal Challenges 2013-2016" held at C3 Events Place in Greenhills, San Juan City, Metro Manila. Participants were some local executives (Mayors, Governors) and Congressmen/women of the Liberal Party (LP) who won in the elections last month, plus sectoral groups affiliated with LP (women, labor, youth, etc.). Some alumni of the International Academy for Leadership (IAF) in Gummersbach, Germany like me were also invited.

Below, Jules Maaten, the Resident Representative or Country Director of FNF Philippines gave the opening remarks, mainly his observation and assessment as FNF official and a foreigner observer (foreigners cannot vote in the Philippines even if they are long time residents and taxpayers in the country). Jules himself was a politician, a former Member of Parliament (MP) of the European Union. He said that despite "national pastime"  of skepticism of the performance of President "PNoy" Aquino, there has been marked improvement in the governance and public administration in the country, and recent fast economic growth is among the results of such improvement. 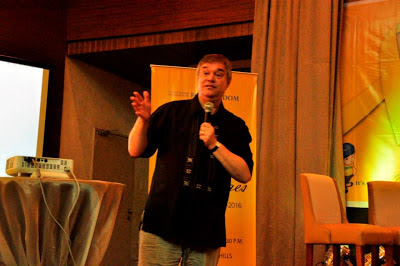 Vicky talked about the role of civil society and NGO leaders in fiscalizing government, Congw. Dina talked about the important legislation passed in the last Congress and the priority bills, in her mind, that must be enacted in the next three years. Mayor Jed talked about the liberal reforms they introduced in Iloilo City, like reducing the period to get a business permit from City Hall, from the previous 10 months down to three months, down to 15 working days, down to three days, and finally down to just 30 minutes. We clapped on this good news.

Mayor Beng talked about how she and her team managed to beat the wide machinery of the Jalosjos clan. She is an articulate and fluent speaker lady. 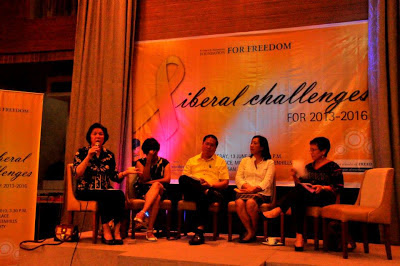 I brought four friends of Minimal Government Thinkers. From left: Mike Perez, Dr. Jed Inciong (a physician, also with MG Board), Harry Santos and Carla Ezequiel. There could have been more who wanted to join us, but at least two were on provincial trips. 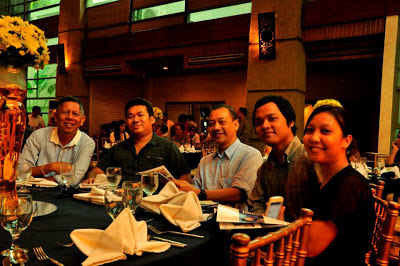 The venue was nice. It was my first time to see C3 Events Place. It was raining hard yesterday though, with heavy flooding in many streets in Metro Manila. One reason perhaps why some guests were not able to come. Food was great. Lots of them. Also an open bar, but I contented myself with two cans of beer, did not sip either white or red wine. 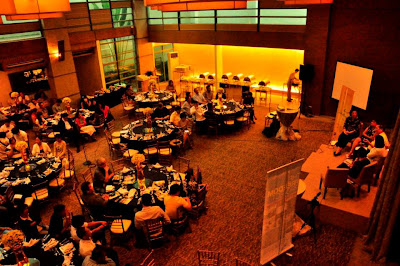 The speakers, moderator, Jules and my friend, Gladys Cruz-Sta Rita, in red dress holding flowers. Fredo, the FNF mascot for Freedom, gave Gladys those flowers. She was the LP Director General and was in the thick of the electoral campaigns. She's my friend, my batchmate at UP School of Economics, and we belong to the same student organization, the UP Economics Towards Consciousness (UP ETC). Before joining the LP, she was the longest-serving Provincial Administrator in the whole country, for 17 years I think, serving three different Governors of the big province of Bulacan. 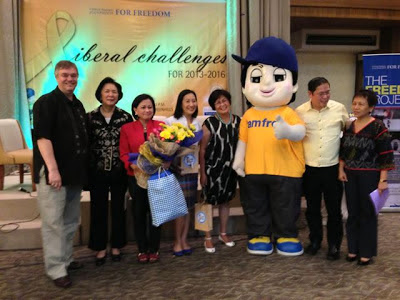 Mike is among the hard core libertarians but he was happy to hear the good news on reducing the bureaucracy as shared by Mayor Jed Mabilog. Mike is also a fellow Ilongo from Negros Occidental. I told Mayor Jed that my wife and her family are from Iloilo City. 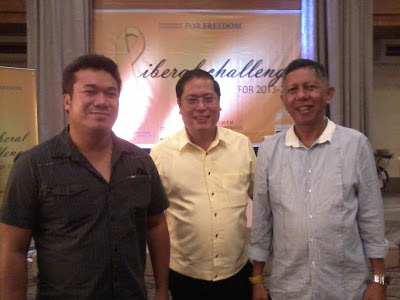 Before going home, we had a group photo with Jules and Lito Arlegui, second from left. Lito is the Regional Program Officer of the Council for Asian Liberals and Democrats (CALD). CALD is among the major programs of FNF in Asia, members are politicians and political parties. The Economic Freedom Network (EFN) Asia is another major project of FNF, members are free market leaning think tanks, NGOs and academics. MG Thinkers is an active member of EFN Asia. 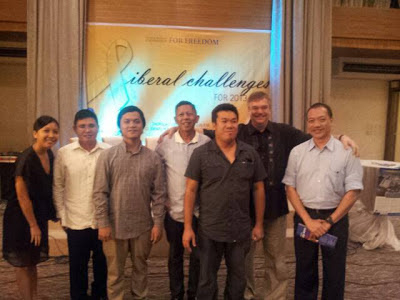 I am a liberal, a classic liberal to be precise, or "libertarian" as often used. Between two wings of libertarianism, anarchy (zero authority, zero government) and minarchy (small and limited government), I obviously belong to the latter. There are certain policies of the LP that I do not agree with, like the drug price control policy as initiated by LP President and former Senator Mar Roxas; playing with populism and expanded welfarism. But there are also certain policies that I support, like the move towards free trade and reducing business bureaucracies.

My loyalty is to the ideology of liberalism -- individual liberty, personal freedom, personal responsibility, free market and competition, rule of law, tolerance and human rights. For me it is the most superior ideology in the planet. Many people may not be aware of the essence of liberalism, that is why they are enamored with populism and socialism. Some simply just love the racket of socialism -- they can centrally plan, regulate and regulate even micro concerns, they can tell and bully ordinary people how they should behave and run their own lives, and they can tax and tax all they want -- habits of insecure and dictatorial-leaning people.

I am happy that the FNF is around to advance the ideology of liberalism and individual freedom. The move by the FNF Board in Germany to put "Fur die Freiheit" or "For Freedom" in big letters, several times bigger than the letters of Friedrich Naumann Foundation itself, was a good move. Emphasize Freedom, emphasize liberty, individual liberty.
---------------