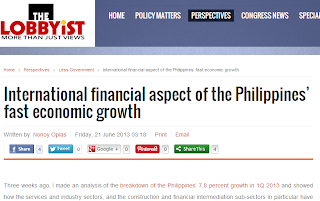 Three weeks ago, I made an analysis of the breakdown of the Philippines’ 7.8 percent growth in 1Q 2013 and showed how the services and industry sectors, and the construction and financial intermediation sub-sectors in particular have contributed the most to such stunning growth rate. It also showed comparative growth rates of other Asian economies and the industrial economies of the US and Europe.

This column will now look at some international aspects and contributors of such growth, and how the Philippines stacks up with its neighbors in the region as well as the industrial and emerging markets in other continents.

Numbers below compare countries in terms of their trade balance (goods and services), current account (trade balance + factor income balance, including remittances by nationals and foreigners of a particular countr), the budget balance (governments’ revenues and expenditures) and interest rates, both short- and long-term.

The Philippines has trade deficit (more imports than exports) but has current account surplus, meaning the trade deficit was more than covered up by high factor income, especially OFW remittances.

Very high debts of the governments of industrial countries, reflected in high public debt/GDP ratio, and in the above table, high budget deficit/GDP ratio, is a big drag to the economies of those countries. The tolerable level of budget deficit is generally pegged at -3.0 percent of GDP. But some countries like the US, Canada, Japan, UK, France and many other European countries have deficit ratio way above that level. This is the main generator or creator of global economic instability in the past few years. And this has repercussions on many emerging economies like the Philippines. 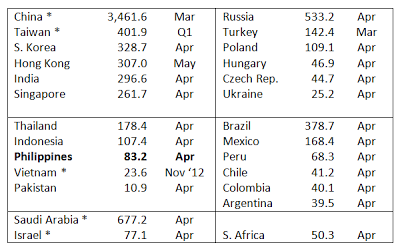 High reserves do not necessarily translate into fast growth in the short term, but more of an insurance against high volatility and instability in the international financial market in the medium to long-term. Foreign reserves are counted in the capital account of an economy or country.

The four Asian tiger economies (Hong Kong, Korea, Singapore and Taiwan) can be characterized also as having current account surplus and high foreign reserves at the same time. It is the envy of many countries and economies. Plus the fact that they have balance surpluses (government revenues larger than expenditures) or low budget deficit, case of Taiwan.

These economies may suffer low growth in the short-term but in terms of hedging their economies from another round of financial and economic turmoil that the world experienced over the past four years. The US housing and fiscal instability in 2008-2010, Eurozone public debt turmoil in 2010-2012, starring especially the PIGS -- Portugal, Ireland, Greece and Spain.

The Philippines can capitalize on many favorable developments in the region despite a weak overall global economic environment. These include (a) rising investments and revenues in the business process outsourcing (BPO) sector, (b) rising remittances from more skilled OFWs, and (c) rising interest and revenues from tourism, including health tourism.

The country’s high and young population is a huge factor for these favorable developments. Young and easily trainable manpower, not only in the schools and universities but also on the job training and actual work itself.

Dynamism and efficiency in the private sector compensate for the inefficiencies, wastes and irresponsibility in the public sector, but only up to a certain point. The Philippine government should bear this in mind and learn lessons from the US and Europe and hence, watch its fiscal condition with prudence and sensitivity to the Filipino taxpayers and entrepreneurs.
Posted by Bienvenido Oplas Jr at 4:38 PM