A friend, law student and Objectivist, free market blogger Froi of the http://vincenton.com/ wrote a good legal and economic opinion on mining. In his article last June 08, 2013, Regalian Doctrine Versus RP’s Mining Industry andEconomic Progress, he traced the history of this philosophy and its negative impact on regulate-tax-regulate thinking in mining. It's a long paper, reposting only portions of it. Below, among the products of mining that many anti-mining activists fail or refuse to recognize. 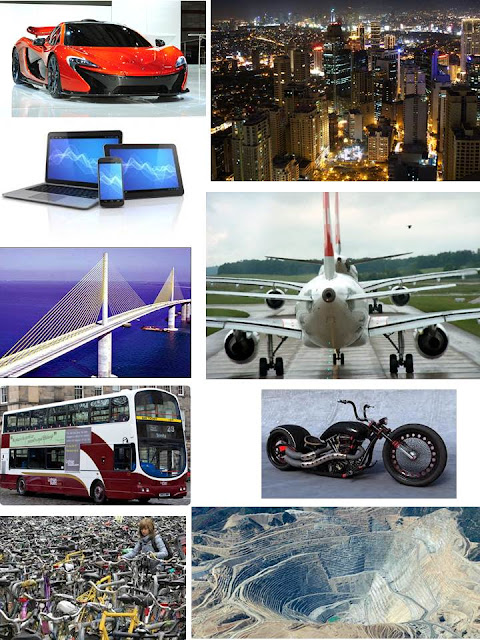 But… such a statist notion is founded on a single primitive, royalist concept, which has all the trappings of European collectivism or statism. This concept is called the Regalian Doctrine first introduced to our political system by the Spaniards through the Royal Decree of 13 February 1894 or the Maura Law. According to this doctrine, all lands of the public domain belong to the State.

This system is enshrined in the 1987 Constitution under Article 12, Section 2, which states:

“All lands of the public domain, waters, minerals, coal, petroleum, and other mineral oils, all forces of potential energy, fisheries, forests or timber, wildlife, flora and fauna, and other natural resources are owned by the State.”

The above-mentioned Constitutional provision is the main reason why the country’s mining industry is one of the most regulated industries in the world. In fact, almost all mining countries of the world, except the United States, follow this Regalian Doctrine….

The case of La Bugal-B’laan

The paramount- or evil- influence of the Regalian Doctrine was clearly demonstrated in La Bugal-B’laan v. DENR. In this landmark case, the Court asserted the authority of the Regalian Doctrine enshrined in Article XII Section 2 of the 1987 Constitution and declared that RA 7942 or the Philippine Mining Act of 1995 is unconstitutional for allowing fully foreign owned corporations to exploit Philippine natural resources. Unlike the 1935 and 1973 Constitutions that authorized the State grant licenses, concessions, or leases for the exploration, exploitation, development or utilization of natural resources, the 1987 Constitution merely permits foreign owned corporations to provide technical or financial assistance to the State for large scale exploration, development and utilization of minerals, petroleum and other mineral oils.

The Supreme Court held: “In any case, the constitutional provision allowing the President to enter into FTAAs with foreign-owned corporations is an exception to the rule that participation in the nation’s natural resources is reserved exclusively to Filipinos. Accordingly, such provision must be construed strictly against their enjoyment by non-Filipinos.”

In this age of globalization and technological innovation, we arbitrarily, capriciously limit foreign participation in our ailing economy and industries when most governments the world over allow Filipinos to invest and buy lands in their respective countries. Without a doubt, Philippine protectionism is in violation of the principle of reciprocity in international law. It is our mediocre, anti-reality, anti-economics protectionism anchored on the statist principles of egalitarianism, Regalian dogma, and social justice that have been driving our economy into the ground….

How freedom led to mining boom in the U.S.

In the early years of the United States, which is the birthplace of free market capitalism, some of its ceded states were acquired from Mexico and France— both of which had long-established mining laws, which carried the influence of the Regalian Doctrine. The sway of this colonial doctrine, which was paramount in these countries, had been said to be at odds with the United States’ Anglo-Saxon common-law system. The American common-law system gives a landowner a right to the minerals beneath the surface of his land property.

According to Jesse Hoover, who wrote a compelling book titled ‘The Economics of Mining’:

“The Regalian Doctrine did not prevail, and therefore a patent from the federal government has ordinarily carried with it the right both to hold the surface of the property and to mine all minerals beneath the surface. Title vests in the patentee absolutely, and under most conditions the land becomes private property.”

Mining claims and statist regulations of the mining industry were virtually non-existent in the early free market years of the United States. Such mining claims and regulations first existed in Europe and in Latin America, wherein the Regalian Doctrine, or the notion that mineral wealth pertains to the Crown, prevailed.

In 1807 the U.S. Congress started leasing mining lands, however, the results were disappointing that it decided to abandon the system in 1847.

Hoover said that miners began to search for a mining sanctuary that guaranteed them freedom from government restriction and intervention….

… how the Philippine government and the anti-mining, anti-mind, anti-reality mob treat people in the mining industry, particularly foreign investors who are willing to share their technical know-how, technologies, and wealth with Filipinos. These technical people are being publicly criticized by Filipino throwbacks who just can’t understand the crucial, indispensable role of mining in human life.

Yet what these clueless anti-mining leftists do not understand is that their lives and survival on earth largely depend upon the people in the mining industry. Yes, the future lies in the ability and willingness of some people to mine earth’s hidden resource and then transform the same into an actual wealth.

America’s early mining industry did not succeed through government help or government regulations. It succeeded by searching— and then valuing— freedom, which was unfortunately eroded during America’s progressive era. It’s no surprise that America became the most economically prosperous nation on earth. All credit must go to America’s Founding Fathers who understood and valued the concepts of limited government, individual rights, and economic freedom.

The real enemy is this Regalian principle, which is one of the root causes of injustice, poverty, and statism in the Philippines.