Weekend Fun 42: Danny Purple, UP Diliman Character in the 70s

In the facebook group "Taga UP Diliman Ka Kung..." formed two years ago, lots of stories were shared. Among them was Danny Purple. He was indeed a character, see different stories from different UP Diliman alumni below. 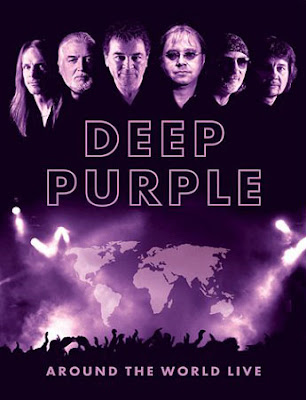 I did not find enough stories about him in google, not even a photo of him. Am using a photo of one of my favorite rock bands when I was in UP Diliman myself, the Deep Purple :-)
---------

Danny Purple was a character at the Canteen near the Chem Pav tambay sa SABAKA, this was in the mid 70's). He would read/recite poetry always in a loud booming voice. his fav quote; "...because, I am Danny Purple!" When I was a freshman I usually veered away from him because he is a tall guy, with mustache and a goatee. Always has a cigarette dangling from his mouth.

He would wear cargo pants with the side pockets. Lahat ng bulsa, may maliit na suklay. Paglakad niya, bawat hakbang eh kabilaang kamay ang dumudukot sa bulsa at sumusuklay. May hitsurang lalake, sobrang in love kay Boots Anson (Roa) at hindi nakatulong ang pag-basted sa kanya. I was in UP from '75 and he was a known character on campus until nag-graduate ako.

He was a very gentle and caring person who really looked out for his friends. Of all the people i got to know in campus, Danny is the one I look back to most fondly. I'm sure he had touched countless lives.

Kasama namin sa SABAKA si Danny Aguilar AKA Danny Purple. One of the wittiest, funniest, and gentlest people I've ever known. One time he stopped traffic near the AS by laying on the street.

Maraming takot sa kanya. Maraming naniniwala na baliw sya. But I had the good fortune of knowing him more intimately than others and being taken under his wing. Magkasama sila ng kuya ko sa SABAKA at close silang lahat doon...pati mga kapatid. Ang tawag nya sa akin ay "sweetheart" and he would always escort me between classroms during my first year in college. He was a true big brother to me.

He was a genius studen t(i think his course was calculus) whose classmate was boots anson roa (that long ago!). they say he was so eccentric. he was so in love with boots that they say, when she busted him, nasira ang ulo. he hung out in and around AS loooong after he graduated. parang si zorro. was in purple pants EVERY DAY, hence the name.

another story- sumakay ng bus (the red one, JD bus) papuntang cubao. FYI, danny is a scary looking guy with thick, bushy eyebrows. when the condoctora asks him saan po kayo, he very slowly turns to her and in a very loud voice that sounded like darth vader, says "SA IMPYERNO!" condoctora backs away shaking, and almost crying, in a whining voice, answers, "hanggang cubao lang po kami eh...."

he was way more fun to be around than zorro. he would sit at the AS lobby and talk to students... really smart and entertaining, harmless really.

Whenever he rode Ikot, he would have an entire row to himself, and all other passengers would be crammed into the seat on other side. And you knew when it was noon, even if you didn't wear a watch, because he & SABAKA would shout P..KE before they ate lunch at the AS Co-op (I didn't know what to say when my female seatmate asked me, "Ano daw?"). Then one day, they just stopped shouting... forever.

Danny Purple entered U.P. in the mid- or late 60s, then over-stayed in campus until the late 70's. Six-foot plus guy ----the tall, dark but not too handsome fellow who was called by his name because of his favorite color purple. He also wore tangerine and many of those pscyhedelic colors of the flower people of his generation , but purple was a standout. He was a fixture at the AS building (Palma Hall) and whose presence cut across so many batches.

He was simply a full-time U.P. tambay who was witty in some respects-----being UP educated---but already had nuts and bolts in between his ears.

Being so tall, he would piss not on the urinals, but on the wash basins. He could have been probably one of those vandals at the comfort rooms.

One time sitting at the backmost seat of the bus, where he would yell at the top of his voice-----"PARA!!!!" jolting every passenger, including the driver who is forced to screech to a halt, only to be ordered again with a booming voice------"GO.!

Boots Anson and I were both Freshmen in 1960 when the term system was introduced. Out of 2,000 new students then, only 800 were allowed to go to our Sophomore year, Boots Anson being one of us. So, to reiterate, Boots Anson entered UP in 1960
We were classmates is Speech 1 class.