There was a Philippine Health National Accounts (PHNA) Dissemination Forum held last Friday, June 07, 2013 at Crowne Plaza Galleria. I did not know it, got no invite. I think only members of Alternative Budget Initiative (ABI) Health cluster NGOs were invited. Anyway, thanks to Mercy Fabros of WomanHealth, she emailed the presentation materials today.

The main presentation was made by Ms. Jessamyn Encarnacion, Director, Social Statistics Office, National Statistical Coordination Board (NSCB). I don't know if those materials will be posted online in their website, but here are the relevant numbers. 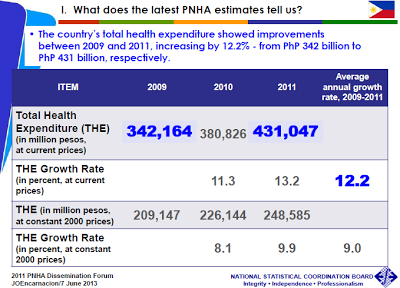 I checked the WHO website for the Philippines, http://www.who.int/countries/phl/en/

Another understatement and wrong data by the WHO. I think they are getting wrong data for the denominator, the GDP.

Please recall that until March this year, WHO data said that the Philippines' Health/GDP ratio 2010 = 3.6 percent only.  But I made a simple computation for 2010:

WHO was wrong with its computation, yet it did not double check its figures. The DOH, WB, ADB, UN, NGOs, etc have been using that wrong WHO ratio.

Some people might be wondering what the heck is a 0.3 percent of GDP difference, it's "small anyway". Wrong, it's not a small amount.

To continue the NSCB presentation, here are their additional numbers. The per capita health expenditures. 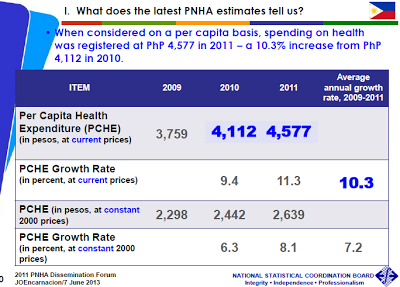 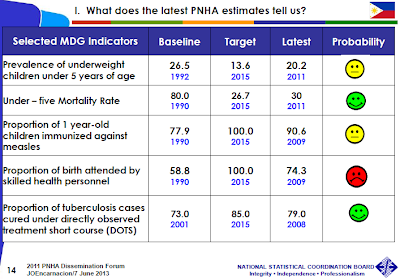 The picture of MDGs is getting dimmer. Either the goals or implementation, or both, are unrealistic. 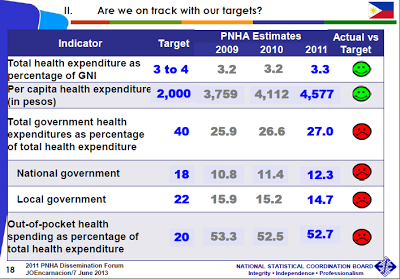 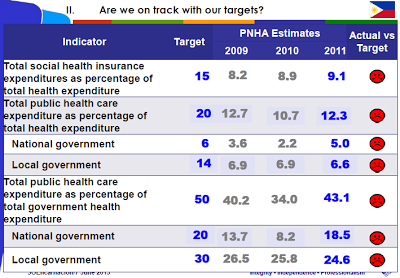 Meanwhile, see this DOH budget target, presented by the DOH in the same Forum last Friday. From P42 billion last year, P50 billion this year, to P89 billion next year. Wow, we should be swimming with cash and tax money with this kind of budget target for one department alone. 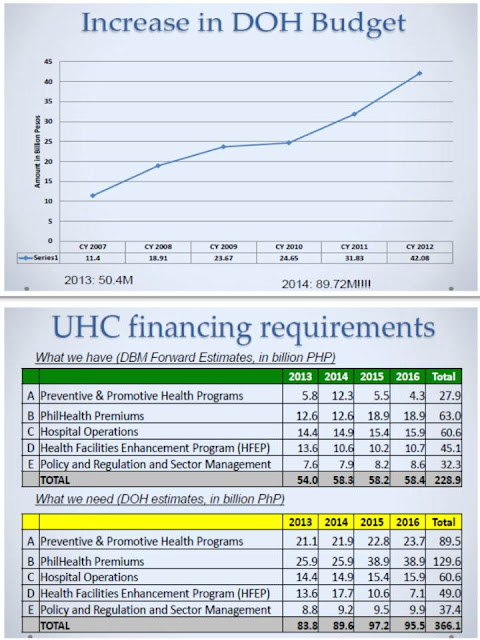