My friend from UP, Rad Basa, was stopped yesterday by the Anti Smoke Belching Unit (ASBU)  of Pasay City while driving his diesel engine car. As in almost all stories of private motorists, his car "failed" the smoke emission test. The batting average of private vehicles in passing ASBU tests is generally zero, regardless of which city in Metro Manila. No one passes. Below is Rad's story, posted today in facebook. He gave me permission to post and blog this.
------------

Yesterday around 1 p.m., I became a victim of an ASBU (Anti Smoke Belching Unit) from the Pasay City LGU at EDSA-Rodriguez.

The vehicle that I was operating was a Hyundai Starex with a diesel engine. It was not emitting any visible smoke yet I was pulled over for "testing". This is obviously apprehension without cause. I surmise that the only reason is that the vehicle has a diesel engine.

I was asked to step out of the driver's seat so that they could conduct their "test". I chose to stand by the driver side door so I could monitor the RPM gauge but I was asked to step away from the vehicle. They revved the engine. It emitted black smoke as all diesel engines do when revved in a certain way and near its redline. Then they showed me the result of the test from their machine. It came out 9.66 way above the 3.5 regulated by law.

I did not believe this because the vehicle had just passed the emission test two months ago for its annual registration. But, there was no point arguing with them. I had no means to refute their claim. I surrendered my driver's license and opted for a ticket and went on my way to do a whole afternoon's worth of errands. 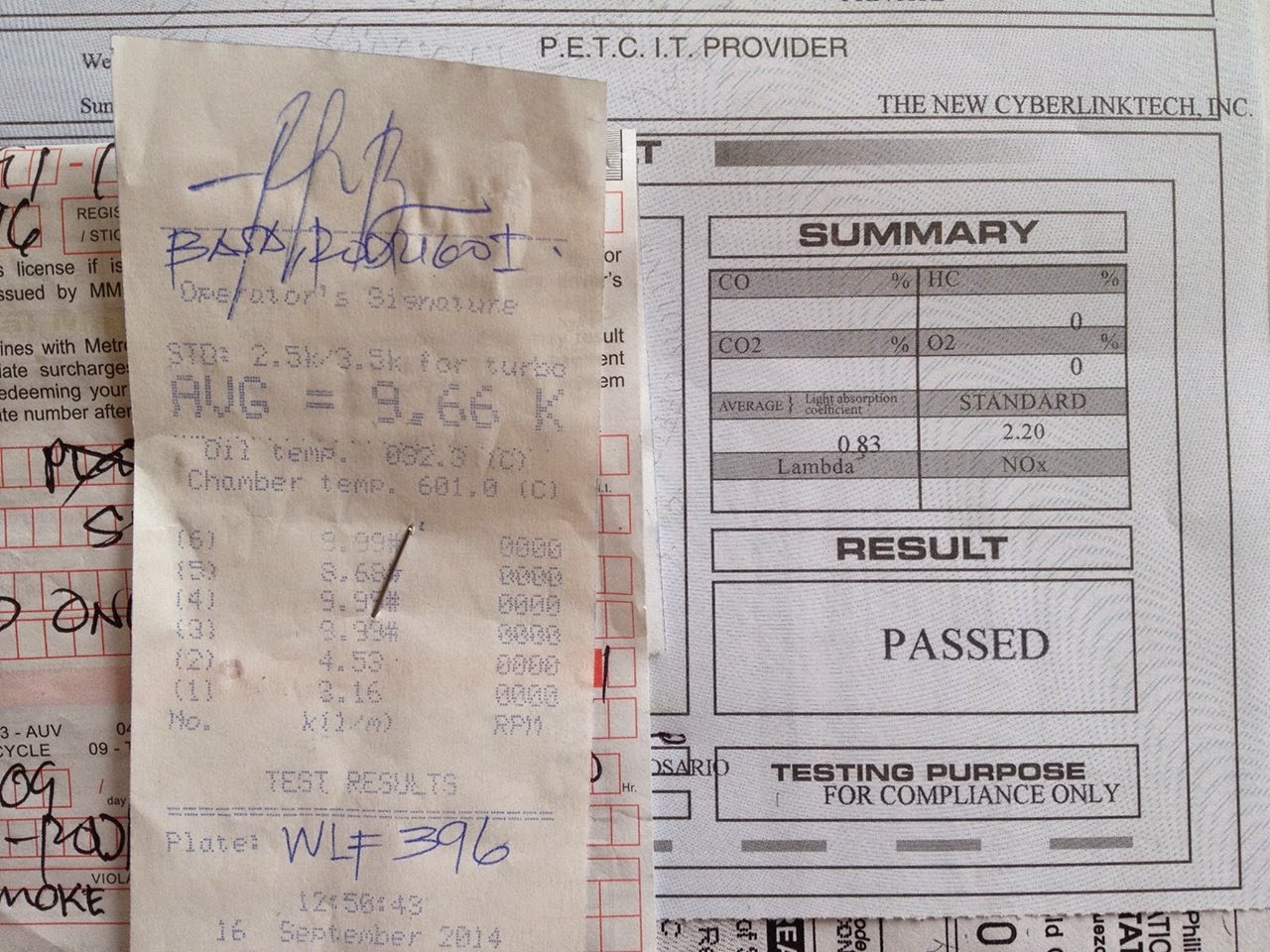 This morning, I brought the vehicle to an LTO accredited emissions testing center. It passed with a score of 0.83. Way below the regulated standard. There was nothing done to the vehicle. No repairs. No tune ups. No washing of the tail pipe. Jesus Christ's mechanic must have visited the vehicle in the night to fix a 9.66 into a 0.83!

The personnel at the emissions testing center think that the ASBU did not gradually rev and over-revved the engine to produce a high result. The ASBU did not follow the proper way to conduct an emission test. 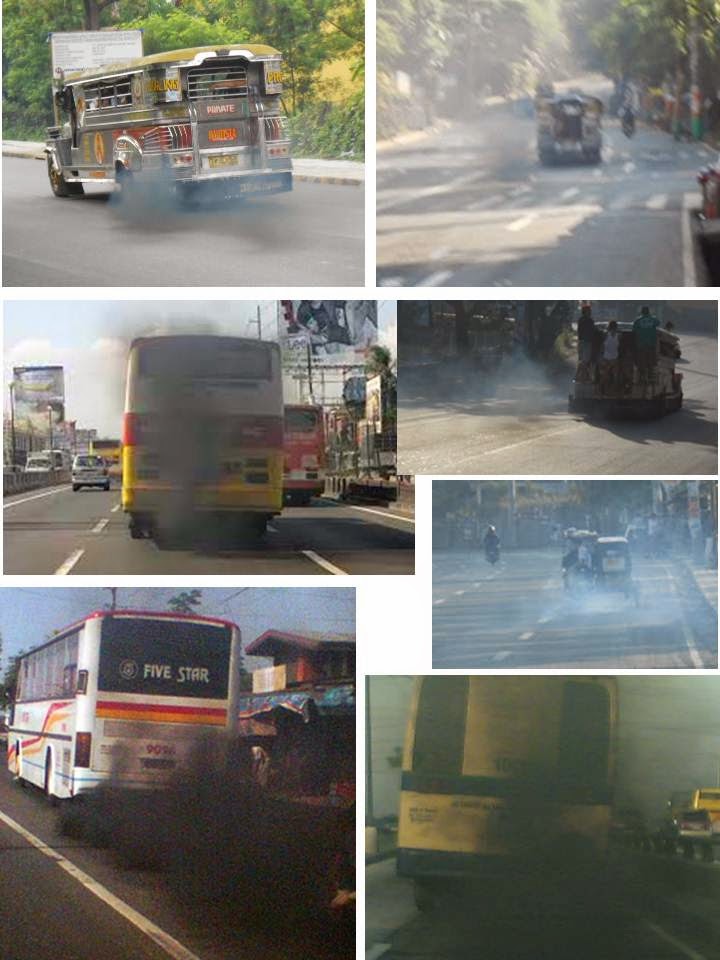 The ASBUs have legal basis for their indiscriminate and arbitrary apprehensions, the Clean Air Act of 1999 (Republic Act 8749). DENR + LGUs are among the implementing agencies. The corrupt and extortionists among LGUs see it as a big opportunity for extortion. The Mayors generally know that it is a tool for extortion but they allow it because these guys are among their political supporters, and somehow the fines from "smoke emission" give additional money to city halls. The fines are P1,000 for the First Offense, Second Offense, P3,000; and Third Offense, P5,000 and attend a seminar on pollution management. So somehow it is a decentralized, deliberate racket.

Sure they have the Clean Air Act behind them but that does not mean they can abuse it and perform illegal apprehensions and perform improper testing.

Flagging diesel vehicles that do not visibly smoke belch to the side of the road just because they run on diesel is similar to flagging down Ferraris running below the speed limit just because they have the capacity to go over the speed limit. And then they perform the emissions test improperly, against the letter of the law. They even have a history of brand new, no plate yet, vehicles that failed.

So they violate the law twice to enforce a law.

More people should blog or make direct complaint against these ASBUs. If they notice, the Mayors included, that they are always on social media, they should be ashamed, hopefully. Like what happened to ASBU Makati. Until now they are still deactivated.
------------

just so you know, the MAKATI ASBUs are back.

same story here with those ASBU Pasay guys. i asked them for the proper procedure and they could not answer me outright, telling me instead the acceptable result values, etc. it seems that they do not even understand how the procedure is done.

they kicked the pedal 6 times, releasing as almost as quickly as they kicked. naturally, fuel will flood the cylinders and with not enough time to draw in air for combustion, or regulate the fuel input to a constant flow (as they released the pedal quickly), and behold! black smoke!

how can anyone, in his right mind, floor the pedal up to 4k-5k rpm and not expect (black) smoke to come out?

i argued that the revving should be "quick but not violent", meaning it should be a controlled kind of push, and that they should hold the rev at constant for 2-4 sec (as per the procedures in the emission testing guidelines), allowing the injection pump governor to kick into action. this should make the fuel flow rate more constant, giving a more stabilized emission reading. they refused to do so saying that that length of time will destroy the engine. also, the results were not in the 0.25 margin of each tests, the standard for a "stabilized result".

Good points Carlos. Yes, take video of what they are doing, especially how they rev the engine, the faces of those guys, the smoke belching jeeps, buses, armored vans that they allow and don't flag down. Post more in social media, in the fb page of the LGU where the ASBU extortionists are based.
(3-12-2016)

Experienced this felt helpless & violated. they even remove my plate number as fast as they can & i was asking them for a ticket. all of a sudden my vehicle was about to be towed to lto pasay. I opted for a "AREGLO" it took 1k just to finish the dilemna.

Oh my, the endless extortion by ASBUs continue. These are outright thieves with government uniforms and IDs and hence, are protected by many other government agencies and bureaucracies. (4-18-2016)

So do i...was also happened i have certicate of thier certified emmision in pasig.expired on july 26 2016 i showed to them the will not accept i argue them why the couldn't allow..i talk thier boss she will not also until they came to test..the guy who setted to revolution he full rev.until the wisthle.same in six times how come they pass you can hear that the engine wisthle..asbu is not clean air act..its an extortion...becuase the have 30% in every violator..that agency must be abolish...

Thank You for this Blog. I'm from Bicol and also encountered same old situation in our region. August 18 my truck was apprehended and penalized for so called smoke belching. I'm contesting it right now citing that my truck was newly registered last Aug 10. It was done properly and inspected at the accredited emission testing center by a QUALIFIED individuals. Revving up a diesel engine which is usually the process of this LTO during their apprehension would have a failed/false result.
The anti-belching law had been founded to regulate pollution coming from vehicle wherein the evident situation it had been the reason why privately owned vehicle with deisel engine are being single out.
My concern during the apprehension are the following:
1. Apprehension without a cause and indiscrimination:
The LTO Truck was recently registered this month August 10 and passed the accredited emission testing at LTO Tabaco and exhibit no black smoke. (see attach certification as proof). The truck was flag down without a visible reason and the main reason it was flag down that it was a privately owned and a truck had a diesel engine. Exempted from this scrutiny are the likes of buses, jeep, tricycle and cars some are evidently in violation of clean act but was not flag down.
2. Misdemeanor and threats of Officer:
The said apprehending officer did not introduce himself nor completely detailed his full name on the T.O.P form. When asked by my driver if he could get his full name Mr.______ get angry and threaten to suspend his license for a year.
3. No proper identification:
The apprehending office at the time does not have a visible identification and was rude.
4. Improper Testing and biased results:
The truck was properly registered and inspected at the accredited emission testing center by a Qualified individuals. Revving up a diesel engine to a high would have a different result.
The portable testing done by the LTO officer was done improperly causing the result to be false and should not be the LTO office basis.
end

Bienvenido Oplas Jr said...
This comment has been removed by the author.
11:56 PM

Bienvenido Oplas Jr said...
This comment has been removed by the author.
11:57 PM

Thank you, Anonymous. Detailed story of highway robbery by those ASBUs in Bicol. I will pass these feedback to a friend under the Office of new DOTC Sec. Tugade. (8-20-2016)

I wrote to Atty. Tuazon, chief of staff of Sec. Tugade about the incident in Bicol, he said that they have suspended the ASBU operation of DOTC, good thing. The big problem is that almost all other ASBUs are administered by LGUs. Thus, Makati ASBU, Pasig ASBU, Pasay ASBU, etc. And this is where many abuses occur, one ASBU may be more considerate while the others are plain arrogant and extortionists.

We have to write to those LGUs through their social media accounts, if they have any -- fb, twitter, etc. This highway robbery does not stop.