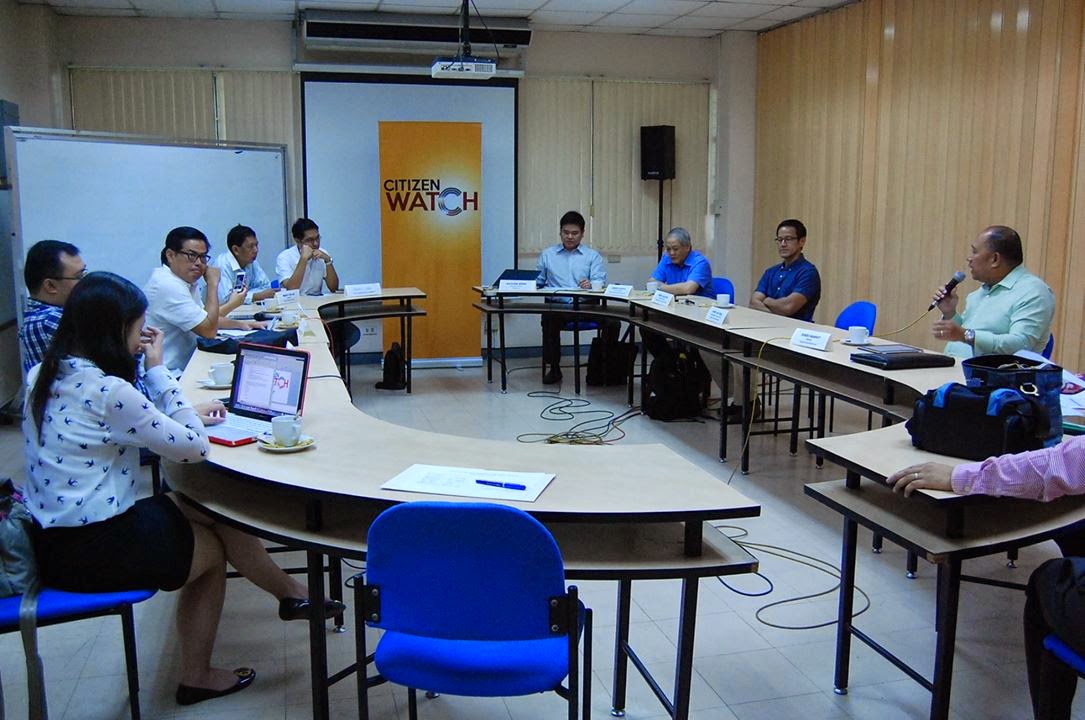 Yesterday, I participated in Round 3 of Citizen Watch's Roundtable Discussion, on political and economic reforms after the 5th State of the Nation Address (SONA) of President Aquino last August. The forum was held at UP NCPAG, Diliman campus. Jointly organized by Stratbase Research Institute (SRI), and the Office of the VP for Public Affairs, UP Diliman.

Wilford Wong, Secretary General of Citizen Watch, was the moderator. 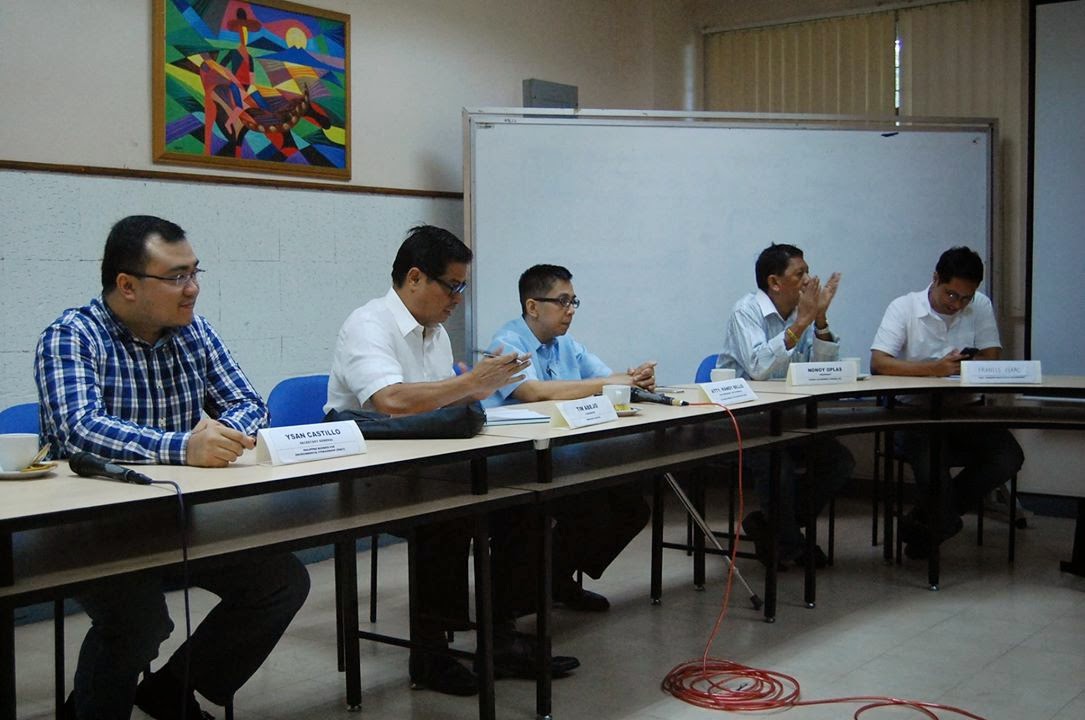 In this photo, from left: Ysan, Tim, Randy, me, Francis.

On my part, I focused my discussion on the last three subjects of PNoy's SONA -- impending power shortage next year, high rice prices, and govermment budget.

On power shortage, I said that the threat of brown outs in the Luzon grid in the hot months next year is real. But there are short- and medium-term solutions. S-T solutions include (a) more peak-load plants, diesel barges, but there will be electricity rate hike as diesel is expensive compared to coal, natural gas, geothermal, hydro;
(b) reduce power demand by asking some big consumers like industrial zones, big mining firms, to have their own gen sets on peak hours of hot months.

M-T solutions include (a) reduce bureaucracies and permits required in building and commissioning new power plants, and
(b) reduce taxes and royalties on power; Malampaya royalty is an energy tax that contributes to our expensive electricity; up to P1.45/kWh. 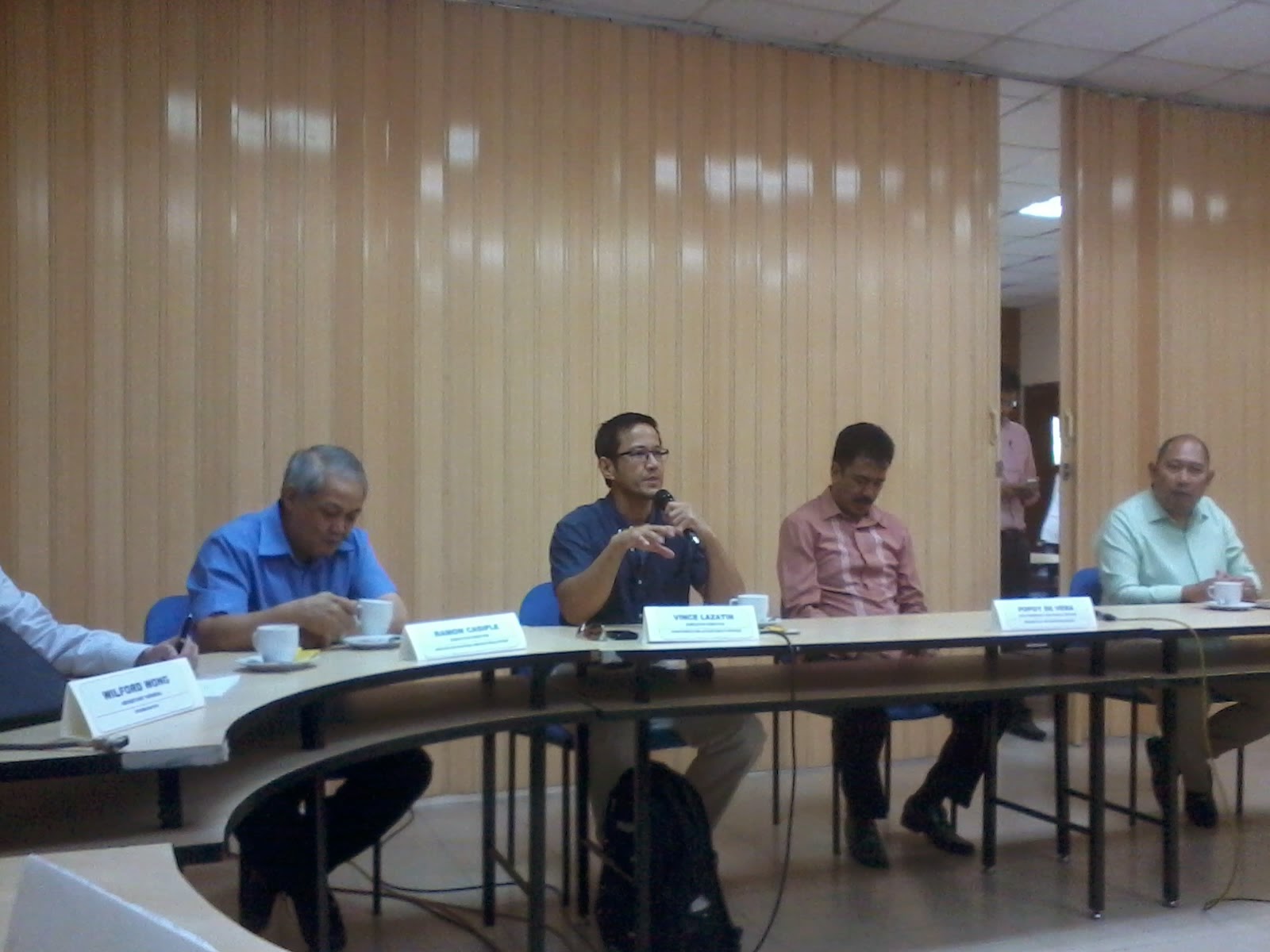 In this photo, from left: Mon, Vince, Popoy, Dindo.

On high rise prices, I argued that the PH should embrace free trade and junk protectionism in rice trading. Vietnam and Thailand simply have huge, contiguous, well-irrigated rice land, up to 9 and 10 M hectares vs PH's only 4.7 M hectares of rice land. Rice in our two neighbors are simply cheap because of their huge production. Why should government insist on expensive rice via trade protectionism and NFA monopoly on rice trading?

Besides, NFA is a huge debt generator; currently around P155 B debt; it cannot and will not pay this debt, so very soon, we taxpayers will pay more to pay back this huge NFA debt, on top of already huge public debt of the national govt.

On fiscal irresponsibility, I argued that government should aim for budget balance, or even budget surplus, on years that there are no major crisis like severe damage by strong typhoons. When in crisis, borrow; when things are normal, pay old or new debt. Persistent borrowings means the government, its officials and bureaucracies, are simply living beyond their means. Lots of wastes and inefficiencies in government.

The Executive branch is generally wasteful; their wastes are tolerated by the Legislative branch, in exchange for their own wastes plus pork barrel. The public and media only lambast pork barrel.

The exchanges among participants were lively. There was a longer discussion on the budget and on power/energy problems. I briefly debated Mon Casiple and Tim on WESM, ERC's price cap, power situation last December, etc. Civil debate of course, focus on the issue. If there was a projector, I could have shown some charts and tables about WESM and various power plants. The two sponsors of the discussion, right. Popoy/UP also gave each participant a bag of recent community papers and publications produced by UP. Modest but nice snacks and lunch were also served, yummy.

All photos from Citizen Watch Philippines' facebook page, except the 3rd photo, from my camera phone.

I made a paper for this forum with 10 tables and 3 charts on those 3 subjects that I mentioned above. SRI will publish it soon.
--------