Energy Econ 25: Coal Use and GDP Expansion, Is There a Correlation? 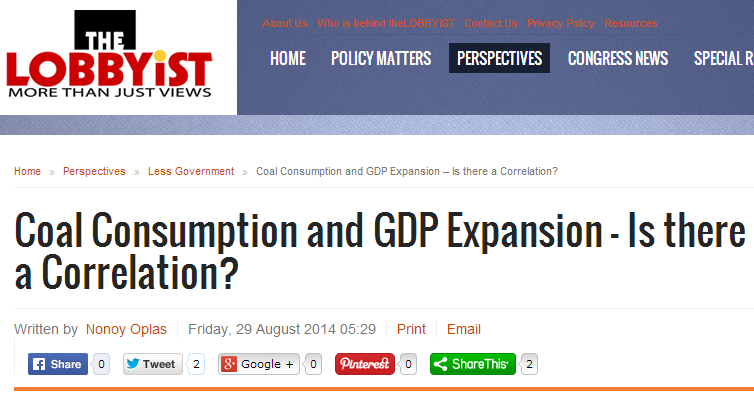 Energy is development. The more energy and electricity that an economy can provide for its citizens and private enterprises at low price and stable supply, the bigger is the growth and development potential of the economy.

There is growing public interest for renewable energy like solar and wind and this is fine. But when there is also corresponding high opposition to coal, petroleum and even natural gas, then public policy is distorted, like more taxation of conventional sources, royalties for Malampaya natural gas. While the renewables are guaranteed of high electricity prices that will be passed on to the consumers, via feed in tariff (FIT) for wind, solar, biomass and run-of-river hydro. People do not recognize and appreciate the value that conventional energy sources have played in alleviating poverty and underdevelopment in the developing world.

For instance, there are claims like “more coal energy = more climate crime”, or “more coal power plants are anti-developmental.” How true or untrue are these and similar claims?

Let us check some regional and global energy and economic data. In particular, global coal consumption as this is among the pet peeves of those pushing for more environmental regulations, energy rationing and carbon taxation.

In 2010, the latest comparative energy data of Asian Development Bank’s (ADB) Key Indicators, slightly more than one-third of the Philippines’ total energy production came from coal. For Indonesia, it is 40 percent. Those that are highly dependent on natural gas are Brunei, Singapore, Thailand, Malaysia and Vietnam.

Source: ADB, Key Indicators for Asia and the Pacific 2013

Here now is the global data for coal consumption. 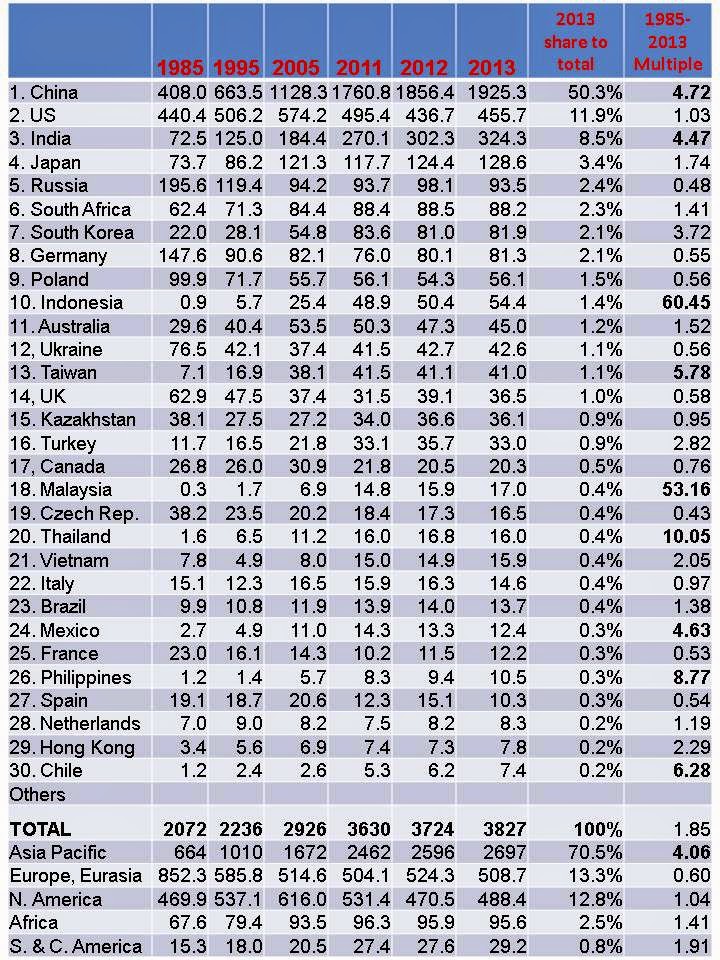 Source: http://www.bp.com/en/global/corporate/about-bp/energy-economics/statistical-review-of-world-energy.html
The last column is not part of the original data, added and created only in this paper.

First, China consumes half of all coal power in the entire planet as of 2013, and the level is almost 5x that of their 1985 consumption level. Its appetite for more coal power seems to remain the same in the coming years.

Second, India and Indonesia join China as among the world’s biggest consumers of coal. India’s 2013 consumption was 4.7x larger than its 1985 consumption. Indonesia’s is 60x much larger. This is because Indonesia has become a major coal producer and exporter in recent years.

Third, by continent and economic group, Asia-Pacific countries consume nearly three-fourth of the total coal output of the planet. Coal however, is least preferred in Africa as well as South and Central America. And it is in the Asia-Pacific where substantial economic growth and poverty alleviation has been happening for the past three decades or more.

Now,  let us review global economic growth over the same period.  The figures for 1995, 2005, 2011 and 2012 are also given for additional information that some readers may wish to see. Data from the International Monetary Fund (IMF).

Table 3. GDP Size Based on Purchasing Power Parity (PPP) Valuation, 1985 to 2013
(in Billions of international dollars) 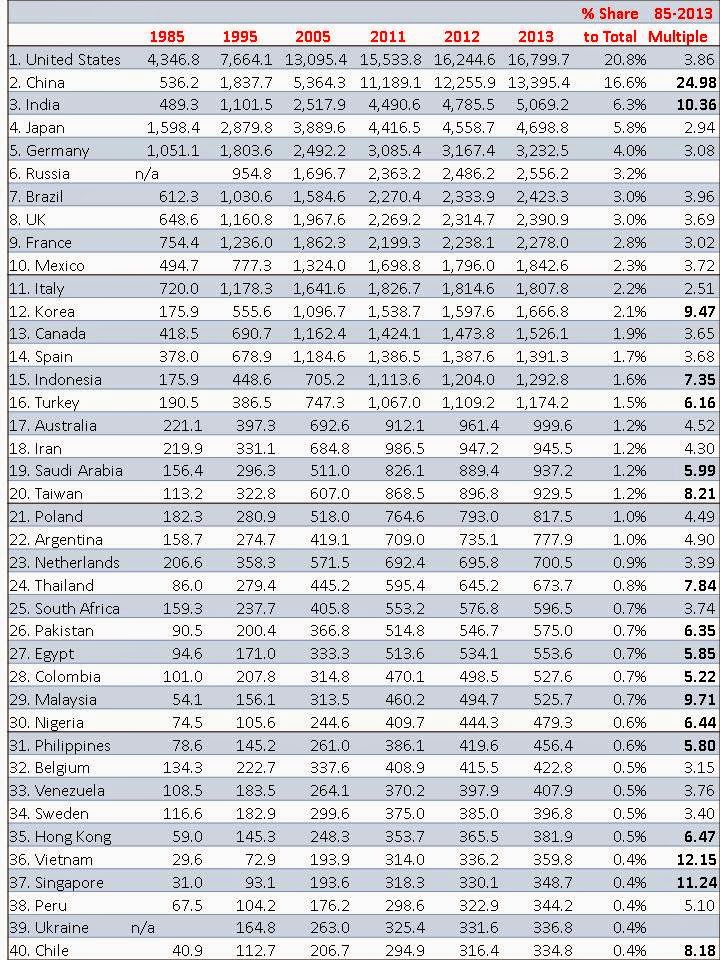 Source: IMF, World Economic Outlook April 2014 Database, www.imf.org
The last column is not part of the original data, added and created only in this paper.

Notice that countries highlighted in bold in Table 2 are generally the same as those highlighted in Table 3. Meaning those that consumed coal energy faster also grew economically faster. Of course this is not to say that coal power consumption is the primary or sole important contributor to faster economic growth.

We now lay down the major players in both coal consumption and GDP growth over nearly three decades. Is there any correlation?

Sources: Tables 2 and 3 above.

This summary table shows the following:

* Of the 10 countries that were fast coal consumers over the past 28 years, meaning their 2013 coal consumption were at least 4.5x their 1985 level (in contrast to many other countries with coal consumption multiples of only around 2.5x),   eight have high GDP expansion over the same period. For instance, China and India GDP levels have multipled by 25x; S. Korea and Malaysia GDP levels multipled by nearly 10x, in just 28 years.

* Only Mexico and the Philippines in the above table, fast coal consumers, whose  GDP expansion were the not-so-fast of less than 6x.

*  Singapore and Vietnam economy expanded by 11 - 12x, also very fast compared to many other countries, even though they are not major or fast coal consumers. They are largely dependent on natural gas, as shown in Table 1.

* This crude comparison has established  a general correlation between coal consumption and GDP expansion. Of course other studies would use more sophisticated econometric models to make any categorical statement. But such finding is easy to explain.

Coal is relatively cheap and a stable energy source. A 100 MW coal power plant can deliver 100 MW 24 hours day, not 80 or 60 MW or lower. In contrast, a wind or solar power plant with rated cap of 100 MW will be very lucky if it can deliver 40 MW sustained for 24 hours. Usually their average dependable capacity is only around 20 percent, or just 20 MW only. So how can an economy develop fast if there is frequent brown out, because the power plant can deliver only 10 or 20 or 25% of its rated capacity? Industries and factories, malls and offices depending on wind and solar must have back up generator sets running on expensive fuel, that must run any hours daily, and this will raise their cost of production and operation.

The WWF yearly campaign of "celebrate darkness" even for one hour is idiotic.  WWF gets lots of money from donations and UN or government funding, by promoting irrationality in energy policy.
------------