I am reposting some interesting reports and opinons here about the ugly turn of events  in  Hong Kong recently where the China Communist Party in Beijing has put its heavy feet on HK people's aspirations for freedom and deeper democratization.
---------- 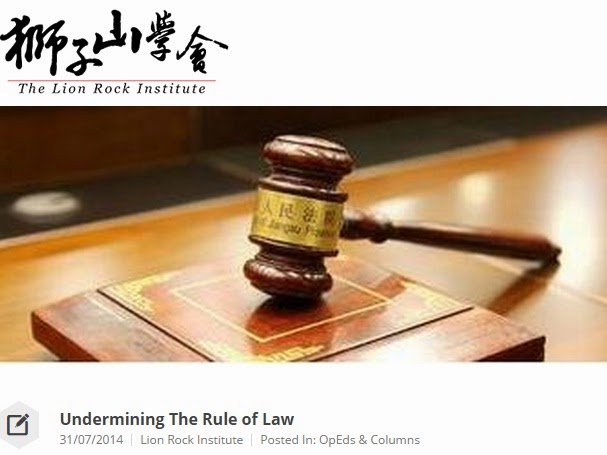 Undermining the Rule of Law

"As the government and bureaucrats find that they typically cannot count on the legislature making new laws, they interpret existing laws with ever wider discretion. The scope of arbitrary regulation is broadening. This does serious damage to the rule of law, although that probably does not start out as the intention." -- Bill Stacey, Chairman, LRI

From the World Street Journal, opinion papers by Hugo Restal:

The people of Hong Kong want China to honor the democratic promises it made when the city became a special administrative region in 1997, and this fight for freedom deserves more world attention—especially as Beijing's counterattack is getting ugly.

Agents from Hong Kong's Independent Commission Against Corruption (ICAC) searched the homes of media tycoon Jimmy Lai, his employee Mark Simon and legislator Lee Cheuk-yan on Thursday. The search warrants covered records of Mr. Lai's donations to Mr. Lee and other pro-democracy politicians. The raid is especially ominous because it suggests that Beijing is compromising the independence of Hong Kong law enforcement....

Such arrests and Thursday's searches risk undermining public respect for the law and the government in general. Ironically it was Jasper Tsang, one of Beijing's staunchest loyalists in Hong Kong, who sounded the alarm last year. When leaders lose the public's trust, he warned, even their good policies will be resented. Beijing's steady erosion of the independent institutions left behind by the British will only increase the desire of Hong Kong's people for greater democracy and autonomy." 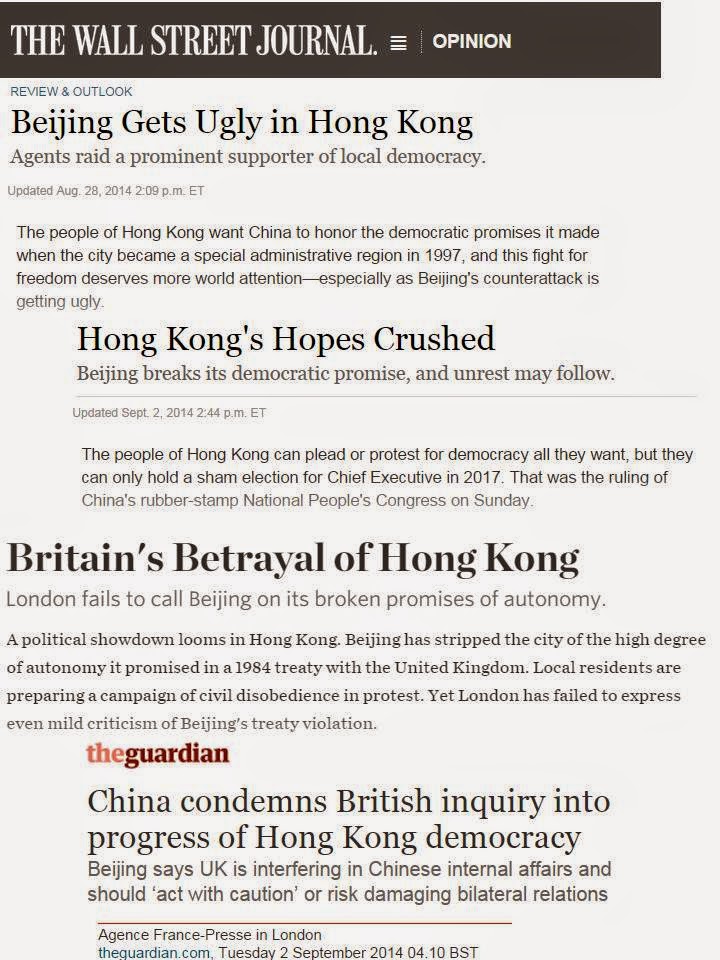 I have met and heard Jimmy Lai 10 years ago, during the Economic Freedom Network (EFN) Asia conference in HK, also co-sponsored by LRI. The man was so down to earth. Typical rags to riches, never forgetting his roots and inspiring others, helping freedom-oriented people and groups to secure such freedom in the future. Now his house has been raided by the Beijing-loyal autocrats. Sad.

The people of Hong Kong can plead or protest for democracy all they want, but they can only hold a sham election for Chief Executive in 2017. That was the ruling of China's rubber-stamp National People's Congress on Sunday.

Moderates on both sides of the political spectrum in Hong Kong had urged compromise. They proposed nomination procedures that would satisfy Beijing's concerns while still allowing the free election that China promised in 1997 when it made the city a self-governing special administrative region for 50 years. Beijing not only rejected these ideas, it seems they were never seriously considered. The Communist Party insists on absolute veto power over the choice of candidates....

This Putinist politics gets a pro-business gloss because most of the city's richest businessmen long ago submitted to Beijing's will. Last week Wang Zhenmin, the dean of the Tsinghua University Law School, was sent to Hong Kong to explain that the electoral system is designed to please the business elite: "If we just ignore their interests, the Hong Kong capitalism will stop. So that's why on the one hand we realize universal suffrage in Hong Kong, on the other hand we must guarantee the continued development of capitalism in Hong Kong."

The threat to Hong Kong's capitalism comes not from democracy, but from the cronyism and erosion of the rule of law that are infiltrating from the mainland. Businessmen may want to curry favor with politicians, but it is competition that drives capitalist prosperity. Beijing foolishly believes that turning Hong Kong into a paradise for oligarchs will make it easier to control....

The tragedy for both Hong Kong and China is that the conflict is unnecessary. The city is manifestly ready for democracy, which would give Beijing fewer headaches rather than more. The cautious and pragmatic population would never elect the populist firebrand that Beijing fears. Instead a vibrant city is caught in a downward spiral of disaffection and fear. Mr. Xi deserves the blame for the consequences." -- Hugo Restall
------------

A political showdown looms in Hong Kong. Beijing has stripped the city of the high degree of autonomy it promised in a 1984 treaty with the United Kingdom. Local residents are preparing a campaign of civil disobedience in protest. Yet London has failed to express even mild criticism of Beijing's treaty violation.

The people of Hong Kong overwhelmingly want to elect their next Chief Executive, a reform that until a month ago seemed within reach. On Monday university and secondary students began a week-long boycott of classes to demonstrate for democracy. A new poll from Chinese University shows that one-fifth of the population is considering emigration because of the city's uncertain future.

This turmoil is the result of Beijing's shock decision at the end of August to rig the 2017 Chief Executive election with the most antidemocratic system tabled by its local supporters. Only politicians who receive majority support from a committee packed with Beijing's supporters will be allowed to run....

As a signatory to the Joint Declaration, only the U.K. has the legal standing to protest Beijing's broken promises. So how did London respond? For four days, the Foreign Office said nothing. Finally it put out a statement even more abject than silence: "We welcome the confirmation that China's objective is for the election of Hong Kong's Chief Executive through universal suffrage." Martin Lee, Hong Kong's doughtiest fighter for democracy, rightly summed up London's attitude as "kowtowing to Beijing for 30 pieces of silver."

It's true Britain's power to influence developments in Hong Kong is limited. Yet Beijing's xenophobic bluster shows that it still fears a principled statement from London to defend the territory's autonomy. Chinese media routinely accuse pro-democracy politicians of being funded by foreign "black money"—even as Beijing pumps money into local puppet groups.

When Margaret Thatcher agreed to return Hong Kong to Chinese sovereignty, she defended the decision on grounds that the U.K. would hold Beijing to its treaty commitments. Count that as one more Thatcherite legacy her successors have failed to honor. -- Hugo Restall,

This news 3 weeks ago says that Britain did write to Beijing and the latter was upset.

The letter from the Beijing foreign affairs committee said the British probe, announced in July, would be a “highly inappropriate act which constitutes interference in China’s internal affairs”.

It urged lawmakers to “act with caution on the issue of Hong Kong, bear in mind the larger picture of China-UK relations and Hong Kong’s prosperity and stability, stop interfering in Hong Kong’s affairs and cancel the inquiry on UK-Hong Kong relations.
http://www.theguardian.com/world/2014/sep/02/china-condemns-british-inquiry-into-progress-of-hong-kong-democracy
------------