* This is my article in TV5's news portal last Saturday,
http://www.interaksyon.com/business/46631/fat-free-economics-poverty-planning-and-populism
-------- 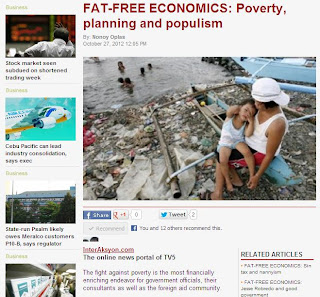 The fight against poverty is the most financially enriching endeavor for government officials, their consultants as well as the foreign aid community.

Trillions of dollars of taxpayers’ money every year are being siphoned off from the income and savings of the more productive sectors of societies in different countries, and diverted to the coffers of governments and multilateral institutions, before the monies are channeled to hundreds of different agencies and bureaucracies, for distribution to the poor.

The most elaborate and the grandest central plan to fight poverty worldwide is the Millennium Development Goals blueprint by the United Nations, supported and implemented by governments, foreign aid bodies like the World Bank and Asian Development Bank, and many NGOs.

By forcibly socializing and collectivizing resources and plans into the hands of those poverty fighters, individual freedom and responsibility has, directly or indirectly, been disregarded or even disrespected.

On November 3-4, I will join a small group of free-market advocates from around the world who will gather at the Harbour Plaza Resort City in Hong Kong for a round table discussion on populism and the religion of “All Powerful Government.” The forum is organized by the Lion Rock Institute, Hong Kong’s first and only free-market think tank.

The discussion would take off from The Road to Serfdom, a bedrock defense of free-market thinking by the Austrian economist and political philosopher Friedrich Hayek.

“Individualism, in contrast to socialism and all other forms of totalitarianism, is based on the respect of Christianity for the individual man and the belief that it is desirable that men should be free to develop their own individual gifts and bents…

“Perhaps the greatest result of this unchaining of individual energies was the marvelous growth of science. Only since industrial freedom opened the path to the free use of new knowledge, only since everything could be tried – if somebody could be found to back it at his own risk – has science made the great strides which in the last 150 years have changed the face of the world. The result of this growth surpassed all expectations. Wherever the barriers to the free exercise of human ingenuity were removed, man became rapidly able to satisfy ever-widening ranges of desire.

“The effect of this success was to create among men a new sense of power over their own fate, the belief in the unbounded possibilities of improving their own lot…”

This is something that the various poverty fighters generally do not consider. They did not ask how much of the poverty that they are trying to fight and solve was due to personal reasons, in contrast to poverty caused by nature, by manmade calamity and by government failure. What the poverty fighters do is to have a grand and elaborate plan backed up by centralized resources to be implemented from the top down. Hayek further wrote:

“’Planning’ owes its popularity largely to the fact that everybody desires, of course, that we should handle our common problems with as much foresight as possible. The question is whether we should create conditions under which the knowledge and initiative of individuals are given the best scope so that they can plan most successfully; or whether we should direct and organize all economic activities according to a ‘blueprint’, that is, ‘consciously direct the resources of society to conform to the planners’ particular views of who should have what’.

“Liberalism regards competition as superior not only because in most circumstances it is the most efficient method known but because it is the only method which does not require the coercive or arbitrary intervention of authority. It dispenses with the need for ‘conscious social control’ and gives individuals a chance to decide whether the prospects of a particular occupation are sufficient to compensate for the disadvantages connected with it.”

The LRI event will be followed by a bigger forum, the Economic Freedom Network Asia Conference, to be held in Crowne Plaza Hong Kong Kowloon East Hotel on November 5-7.

With the theme, “How Welfare Populism Destroys Prosperity,” the forum will have several hundred international participants and will be sponsored mainly by the Friedrich Naumann Foundation for Liberty.

Political populism - pandering to the lobby of the noisy sectors and to the deep desire of many politicians to win votes through welfarist programs - has created huge havoc in the fiscal condition of many governments. It has also caused more uncertainty in the global macroeconomic environment and has corrupted the attitudes and work ethic of many individuals.

Many people now begin to think that for whatever social or economic issues, more government is the solution. And that is how many societies and governments have elaborately planned and created various “poverty-fighting” programs - from education and books to healthcare and medicines, housing and relocation, MRT subsidy and fuel discounts, tractors and credit, multiple business regulations and taxes on the well-to-do, cash transfers, and very soon, condoms and pills.

It may not be a far out possibility that governments may soon introduce iPad and Samsung Galaxy tablets. After all, many governments and politicians are specialists in the “spend-tax-borrow” philosophy.
By shelving more individual freedom and responsibility, by having more central planning and political populism, governments are contributing to poverty.