Facebook proves to be a good venue for exchanging ideas with friends. Below are exchanges on various topics on various dates this month.

My friend Floro posted this in his wall, our discussions after


I believe the bright minds of the free world unlike the Capitalists and profiteers and the grafters in government who are acting as police for the filthy rich will find easier and better ways to get around with this concern, so much so that governments will run out of resources running after proponents of free access, free information and free exchange of ideas. There are more dumb people in governments and in the police than there are among the street children who survive even if their governments and police do not take care of them...There will be a lot of catching up to do for them...meanwhile we will continue to have fun. Lets work on their loopholes as they try to profit too much!!!!The world has changed and that is why the Capitalist World is slowly crumbling with their ran away deficits because in the west their governments no longer have money...and yet the Capitalist can easily move from state to state with their money...Let us chase them profiteers while the government chase us!!!!

Floro: Yes Nonoy I agree but there are capitalist who have insatiable greed for money and there are capitalist who profit more from the inventions of others. There are laws that regulate but this are supposed to be for greater access of the greater majority not for the control of a few who make their money make money without sweat. while the rest of the world work like slaves getting almost nothing. The worst side of capitalism and socialism had made life more difficult to the free world!

Floro  Nonoy I agree but I also agree with Paretto Optimality! You can be a greedy capitalist but please pay your workers decent wages and allow them decent lives not slaves...something to that effect I suppose... I also abhor lazy people, mendicants and beggars who do not try to look for options and chances!

Floro We also have the option to be responsible and not be greedy! And we have the option to get things free as in those copyrights that should have ended already. There is not such thing as absolute freedom - both for consumer and capitalist alike AS WELL AS FOR WORKERS AND EMPLOYERS. If we go from start, everyone started from nothing, then there were those loggers and miners who made our forest bald and then they became politicians and then they started to regulate the forests and the mines. There are those nations which industrilised and started dumping their pollution everywhere, then they now start to regulate carbon emission...So one can then say also that I can be under your law or not if I can ran away with it, if it is only beneficial to you but not to me as well!!!! Just like telling Iran not to go nuclear after they have become nuclear THEMSELVES...EQUITY FROM THE START SHOULD BE EQUITY TILL THE END!!!
------------

I did not reply to his last comment but quickly, here are additional points:

* Option to be responsiblre and not be greedy -- I agree.

* Option to get things free as in those copyrights that should have ended already -- Right, but only after the copyright has ended. Some authors (books, articles, music, etc.) also share to the public their work for free even if these are still copyrighted.

* From start, everyone started from nothing, then there were loggers and miners who made our forest bald and then they became politicians and then they started to regulate the forests and the mines. -- That is one problem with collective property and absence of private property. The forests are owned by everyone and no one in particular, so it can be a race for whoever can cut those trees the fastest, the "tragedy of the.commons." When government was invented with its regulatory and coercive powers, that is where political rent-seeking came. Them who are in government were generally exempted from the prohibitions and penalties imposed by the government itself.

* Equity from start should be equity till the end -- If you mean rules should apply to all and exempt no one, I agree. That is the essence of the rule of law, the equal application of the law to unequal people or institutions.
---------- 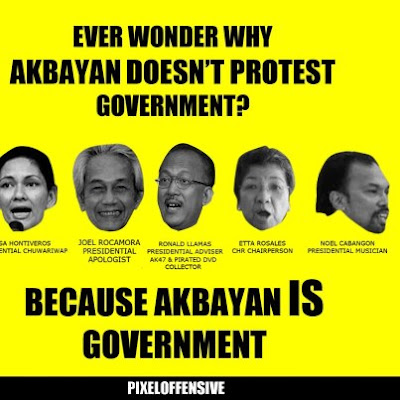 That same day, I posted this in my fb wall and tagged some of my friends who are members or officers of Akbayan party list group, right.

Comments and exchanges below:

Oscar I guess it is true everywhere: if you can't beat them, join them. And by the way, they're not too different from the ones they joined.

Nonoy Right, and more particularly for Akbayan because it advocates socialism, explicitly or implicitly. Socialists want to be in government whenever possible because you cannot do central planning if you're outside of government. I used to be a socialist before, but I abandoned that ideology many years ago, simply not workable.

Froi  The leftists are now in power? Yellow is the new red?

Nonoy Akbayan is just one of the many left-leaning groups in the country. The dominant left, CPP-affiliated Bayan Muna has limited power, as party list reps, but they don't have guys at the Executive branch, unlike Akbayan.

Eugene  That is why I hate people from the left. In a libertarian society, we accept people we don't like. But in a socialist society, they jail and kill those they consider different.

Tos That poster is simplistic.

Maricris  Any political party that claims to stand on principle should walk the talk.

Nonoy  Thanks Tos, Maricris. There are personal attacks on that poster which should not be the case. They simply should have put the official position of those persons. Nonetheless, Akbayan is successful in putting a number of its top officials within the PNoy administration. Any political party should aspire for such -- to be in power, and influence public policy based on that party's political ideology. In the case of Akbayan, to go for more socialist-leaning public policies. The bigger fault actually is with the LP. If LP sticks to its original political ideology of liberalism -- not socialism, not protectionism, not authoritarianism, not fascism, etc. -- there would be no place for Akbayan or any left-leaning political party to get high positions in the Executive branch. LP has generally abandoned liberalism in favor of populism. Witness for instance its senatorial line up.

James That's why many hardcore leftists consider Akbayan a sell out party.
----------

Cybercrime law became effective today. Many of my friends changed their profile to sealed lips, advised their friends to be careful with their postings, etc. I do otherwise. BIG government is evil. The more expansive the state, the more interventionist, the more insecure, the more paranoid its officials become. Shrink the government, paranoid govt officials should get real jobs, not that regulate-regulate-regulate, tax-tax-tax, spend-spend-spend work, lousy.

Shared from Larry Reed:
"There is all the difference in the world between treating people equally and attempting to make them equal. While the first is the condition of a free society, the second means as De Tocqueville describes it, 'a new form of servitude'" -- F. A. Hayek.

Vic Agreed! We should vote out politicians who espouse this with their political patronage system.

Joshua Ha..ha...ha..lol..and next thing to happen, everybody will depend on what the government can offer. No one will seek employment because they know that there is a government subsidy for the poor.

Vic This is the path taken by Europe, and last century by Latin America with horrible results. Too hard to hope these guys learn from mistakes of other countries?

My friend Tos posted this in his fb status and tagged me: 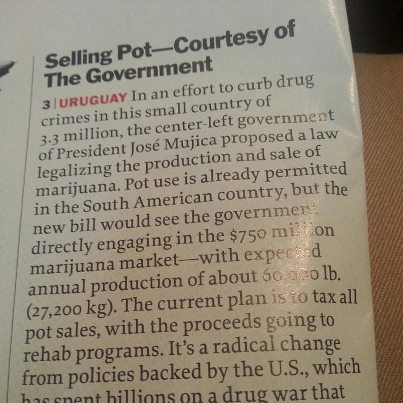 I commented that yes, we should legalize drugs, legalize prostitution, legalize jueteng and other forms of gambling, legalize and allow all -- except killing, stealing, rape, kidnapping, etc. Society will be more peaceful if there are very few prohibitions and govt resources if focused on enforcing those few prohibitions like killing and stealing.

It doesnt have government to be the seller of pot. It can be private, government only regulates and taxes the private pot sellers, like ensuring there is sufficient labelling, amount of certain chemicals are within limit.

More prohibitions and restrictions even in activities that do not harm other people, more government corruption. 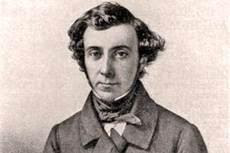 I shared this quote and photo from Larry Reed's fb status:

"A man's admiration for absolute government is proportionate to the contempt he feels for those around him" -- French historian and author of "Democracy in America" Alexis de Tocqueville.

Steve  I bow to Tocqueville. His observations are as valid today as when he wrote them. My opinion, without any scientific basis, is that the "strong man" absolute government allows me a greater degree of laziness and requires me to take less responsibility for affairs of the world and my own life. I can always just say "The (fill in the blank with title of the strong man) should do this/make a decision." And until he does, I don't have to do anything.