Rule of Law 17: Justice Without Discrimination

These were the last written words we have received from Hasan Jafarey, who died two days ago. He wrote his perception during our IAF Alumni Meeting in September: 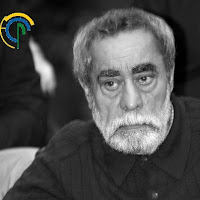 The most important function of the Rule of Law is to provide for justice to all without discrimination. This is the only glue that can provide for harmony and equality. When a sense of justice and the existence of a just society exists in polity and the polity is assured that it will be meted out justice in its relations and affairs with equality for all whether rich or poor, high or low, and without racial, ethnic or religious prejudice that society is set on a firm and sustainable foundation for progress and emancipation and empowerment.

Pakistan lacks this sense of justice among its polity. There is a perception and actual reality that the rule of law is not applied equally for all. Different sets and parameters govern different individual and groups in different ways. The disharmony and the application of the rule of law has led to a sense of frustration and alienation in the people of Pakistan as a whole.

It is therefore of paramount importance that a strict application of the rule of law is implemented in Pakistan. The people of Pakistan demand this and not implementing it is a sure recipe for disaster. To achieve this judicial reform backed up by the force of law is required from the lowest ties to the highest in the country.

Pakistan is in dire need of having a tolerant society. The absence of the rule of law contributes to intolerance in the Pakistani Society as a disgruntled polity, surfaces its latent frustration and anger upon one another.

Tolerance does not mean giving up one’s beliefs but contributes to accommodate in diversity of opinion and trying to understand other people’s point of view. Respecting the non-violent expression of dissent contributes to a multicultural polity. There should be unity in diversity. Division should be able to grow together. Respect for others gains in respect for each other. It reinforces the environment for a peaceful coexistence. Liberty, indeed, must be with responsibility. My freedom ends where other persons’ freedom begins. This is the recipe for peace and Pakistan needs it badly.
# # # # # 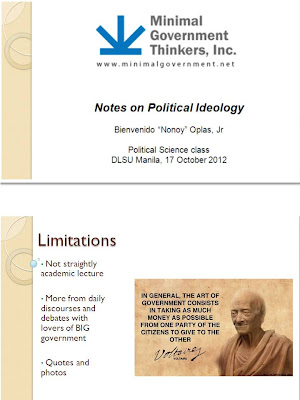 Meanwhile, I gave a lecture yesterday at my wife's two classes in political science at De La Salle University (DLSU), where she is handling four classes this trimester.

My powerpoint contained  26 slides, showing only half here. The content I lifted from my previous blog posts here under the "Pol. Ideology" discussion series. 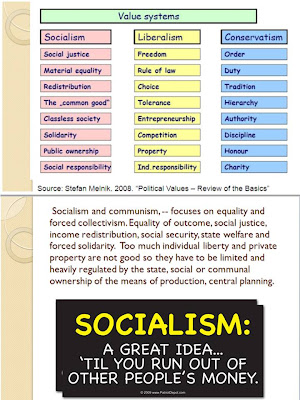 I started with the matrix by Stefan Melnik in my last blog entry on Pol. Ideology. The students liked it.

Then I explained the three political ideologies further, with the aid of some posters which I got from some free market facebook groups' photo albums. 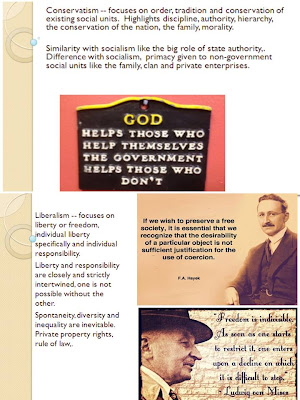 I explained that conservatism is not limited to the government, it applies also to church groups, universities, families and clans, cultural groups, NGOs, media and private enterprises or corporations. But it is more prominent in some governments around the world.

Posting quotes and posters of Friedrich Hayek and Ludwig von Mises, two of the famous Austrian economists and political philosophers, made it easier to explain what liberalism is. 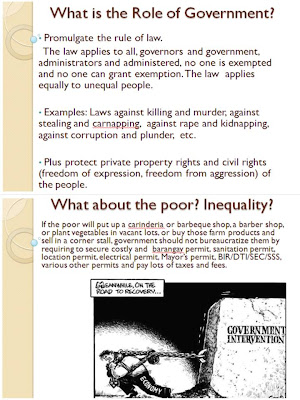 Moving to the topic of the role of government was easier after discussing the three major political philosophies. 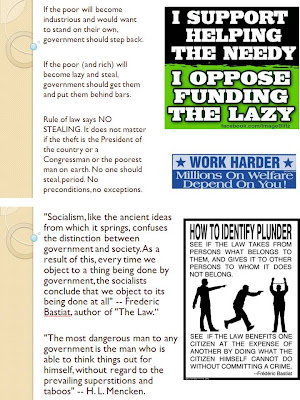 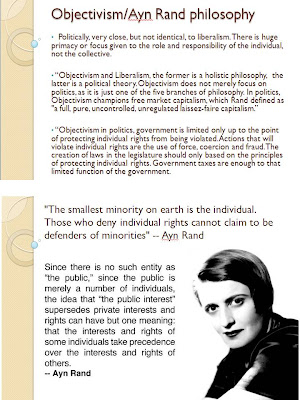 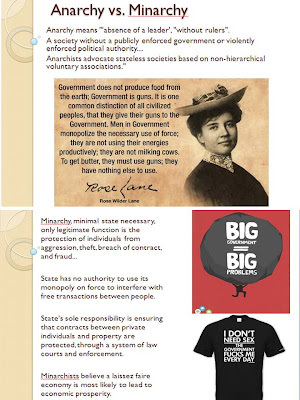