The Cybercrime Prevention Act or RA 10175 has jolted millions of netizens in the Philippines and abroad that the government will not hesitate in throwing its heavy intrusive hand in penalizing people, directly or indirectly, who might become too critical of its intrusiveness and corruption.

The law in short, has shown people that more or BIG government is wrong. If people ask the government to provide and subsidize more, to tax and regulate more, then people should also expect the government to intervene and intrude more, to regulate and prohibit more. See  Web and the State: Cybercrime Law and Liberty.

So I thought before that the Reproductive Health (RH) bill will become a law soon as too many people want more government. They even expect the purchase and distribution of condoms, pills and other contraceptives to be done by the government, financed by taxes. After the cybercrime law, I think more people have become more suspicious of asking the government to become even bigger, so public support for the RH bill  might have dwindled.

I am against the RH bill for four reasons.

One, it contributes more to making an already big government becomes even bigger. Condoms and pills lang, gobyerno pa?

Two, many services and provisions in the bill can be done by civil society and concerned citizens with no need for additional state coercion.

Three, people are assets, not liabilities. Using money coercively confiscated from the people's pockets (aka taxes) to finance government population control is not wise.

Four, even without an RH law, the DOH is already spending big for RH services. In its proposed 2013 budget alone, the DOH will spend  P2.54 billion on various RH services, P539 million  of which are for various family planning supplies like pills and DMPA injectibles. 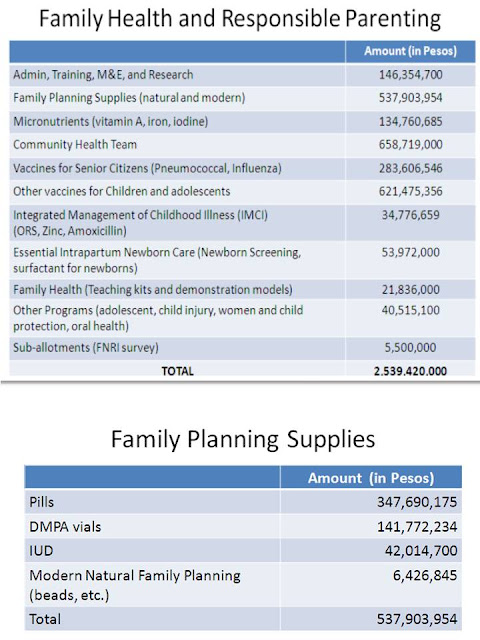 If public sympathy towards government population control will wean someday, Congress can simply disapprove budget requests by the DOH for more contraceptives, no need for prolonged public debates to amend an existing law.

We need less laws. Less government intervention especially via legislation. Almost all of our laws have no sunset provision or period of self destruction, meaning they are laws forever, until they are explicitly abolished or drastically revised. There is no Gawad Kalinga bill, or Books for the Barrios bill, or Solidarity During Flooding bill, and yet various humanitarian work are accomplished with zero legislation, zero coercion, zero taxation involved. RH services can be done without legislation as the DOH itself has been doing it many year

If the goal of the RH advocates is to make certain FP supplies, maternity facilities become available nationwide, the DOH can do that and has been doing that for several years now, though not in ample amount yet.

There are certain provisions of the RH bill that simply imposes coercion and dictation. LIke coercing ALL OB professionals to provide 48 hours per year of pro-bono services to poor preggy women, that they need to get such certification, another bureaucratic procedure, from the government each other otherwise they can be penalized. As if OB professionals here are not doing such services, like joining medical missions, giving "Thank You" services to really poor mothers in certain cases, and so on. Also, the coercion requiring ALL students from Grade 5 to High School, six years total, to take RH subjects otherwise they cannot graduate, and so on.

The RH bill is not a law yet, but like the Cybercrime bill, once it's near completion to become a law, we can expect all sorts of insertions or "singit" and riders later on by the legislators. Most Filipinos do not really trust those Senators and Congressmen, so we give them again another opportunity to make insertions up to the bicameral level. Once it becomes a law, another round of opposition as some groups will go to the Supreme Court to ask for its nullification as being "unconstitutional", the way that many groups have done with regards to this cybercrime law. 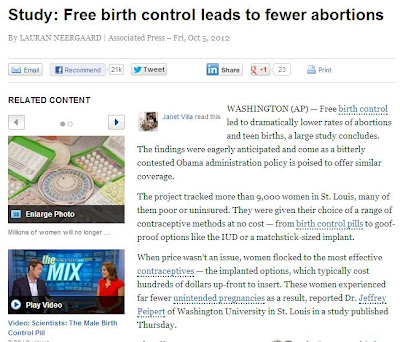 One friend in facebook posted this report from yahoo news last October 05 in his fb status. I commented that this article means government sponsored population control leads to fewer abortions. Yes, true. And it also leads to less births, less babies, less future workers and entrepreneurs.

My friend is has one daughter, typical middle class family. I added that his household has a yaya or helper, plus driver. My bet is that the household workers did not come from 1 or 3 children households, but from 4 or more children households. Which proves that people are assets, not liabilities.

Government using taxpayers money to control population is wrong. Let people, the RH advocates especially, buy their own condoms and pills and give these for free to the poor. This way, they can walk the talk and whatever inefficiencies in their advocacy later on will have limited damage to the rest of society. Compare that to a situation where there is institutionalized government population control policy via an RH law that has no sunset provision. The outflow of money and resources even from those who never supported the policy in the first place towards that program will be a perennial expenditure item.
----------
See also:
Fat-Free Econ 19: Population Decontrol, Not RH Bill, August 08, 2012
Population Control 10: Anger and Coercion in Pushing RH Bill, August 10, 2012
Population Control 11: Church Coercion vs. State Coercion, August 12, 2012
Population Control 12: RH Bill will Become a Law, August 17, 2012
Population Control 13: Excess People are Liabilities kuno, August 25, 2012
Posted by Bienvenido Oplas Jr at 2:48 PM

" As if OB professionals here are not doing such services, like joining medical missions, giving "Thank You" services to really poor mothers in certain cases, and so on. "

in which case the law wont change the number of probono hours. it doesnt matter then (i.e. its not binding)