Last week, thousands of doctors in Peru decided to end their more than one month strike, aside from tens of thousands of public school teachers, all demanding higher wages from the government. Here are two stories, 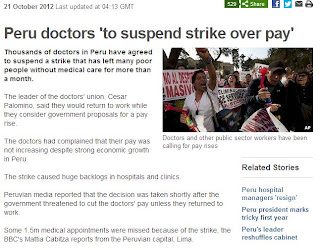 The shows the big problem if healthcare is heavily nationalized or monopolized by the government. When this happens, even if the strike is only for one day -- five weeks in the recent case of Peru -- the most affected are the poor, not the rich, not the government officials, not the politicians and legislators.

The healthcare model in the Philippines is different. There are:

So If the DOH hospitals will have problem with their financial condition, the other hospitals and their doctors are not directly affected and hence, patients can go to these alternative hospitals.

We need more diversity in HC providers, not less. Hence, not monopolization or nationalization of HC.

Meanwhile, here's a related article from Reiner Gloor of PHAP in his weekly column in BusinessWorld. It covers some old and new proposals how to expand  "Health Financing" in the Philippines, like making PhilHealth contribution be based on income and not a fixed amount.

Personally, I am not in favor of this proposal. First, it will further expand PhilHealth towards monopolization and nationalization of HC. Second, those who have large income but do not declare such -- many businessmen, professionals, criminals (both public and private), etc., will contribute little or nothing, and we fixed income earners will subsidize them?

Then there are the personnel and consultants of foreign aid, multilateral and bilateral agencies (UN, WB, IMF, ADB, USAID, JICA, EC, etc.) who are not covered by the mandatory withholding tax on their monthly personal income. Many of them do not declare their income, or declare at highly understated amount.  We fixed income earners from the private sector will subsidize them as well, even if their average salaries are several times larger than ours, tax-free?

EVEN WITH the robust economic growth in the Asia Pacific region, the World Health Organization (WHO) observed that people suffer financial catastrophe and are pushed to impoverishment because they have to pay for their own health care. In-fact, out-of-pocket payments push 100 million people into poverty worldwide every year because they have to pay for health services directly.

The Philippine health care system is not exempt from high out-of-pocket expenditure and its impact on health and economic outcomes.


The Family Income and Expenditure Survey disclosed that of the P100 spent for healthcare, P54 is paid directly out of the pocket of a Filipino patient. In relation to this, a Social Weather Stations Survey in 2010 revealed that respondents would pay using his own money, would solicit funds or even borrow money just to pay for health services.But for the poor, they forgo health services to give way to other household priorities. They are the poor who have been identified by the National Housing Targeting System as belonging to the 5.2 million families who live below the poverty line. They are also those who spend two thirds of their income on food alone followed by shelter and transportation.Dr. Ramon Paterno of the National Institutes of Health at the University of the Philippines, raises the point that people should not go bankrupt just because they are sick. He calls to attention the high proportion of health expenses that patients spend “out of their own pockets” -- amounting to 54% when the recommended rate is 20% to 30%.The WHO said that the difficult health decision of either getting sick or getting poorer reflects “insufficient health spending by many countries in the region, limited prepayment mechanisms and safety nets, and an overreliance on out-of-pocket expenditures to finance the costs of health care.”Developing financing strategies to help fund health and achieve universal coverage where people will have equal access to health services is one of the objectives of the government’s universal health care or Kalusugan Pangkalahatan (KP) agenda.The WHO said that “health financing is concerned with how financial resources are generated, allocated and used in health systems.” Health financing focuses on how to move closer to universal coverage by raising sufficient funds for health; overcoming financial barriers that exclude many poor from accessing health services; or providing an equitable and efficient mix of health services.As part of the Department of Health-led Secretary’s Cup, issues about health financing are being brought to light this month. The importance of this discourse is underscored by the health outcomes in the Philippines that continue to show gaps in health care between the rich and the poor.One of the issues to be discussed is the proposal for PhilHealth premiums to be based on capacity to pay. One of the principles of social health insurance system is solidarity where one’s contribution is based on his ability to pay. In this scheme, the rich contributes more, while the poorest of the poor are subsidized completely.In the present system, members with incomes of P30,000 and up pay a maximum of P750 monthly contribution. If the salary cap would be removed, those earning more will pay more than the current P750 monthly contribution.Another proposal for consideration is that all Filipinos should be considered covered by PhilHealth by virtue of citizenship. If we shift to a tax-based system, people born before and after the policy is implemented must be covered. It could likewise extend to long-term residents who may be contributing premiums and paying taxes.The primary goal of universal health care is to provide universal coverage to all Filipinos. On the other hand, discussions are needed if membership to PhilHealth would be made automatic. Some say that the move would encourage non-compliance with payments. Others argue on the basis of fairness in relation to formal employees who will then have to shoulder the costs of health care even for those who choose not to contribute.Another issue for discussion is PhilHealth’s allocation for mass-based health prevention interventions. Health is seen as a continuum from promotive, preventive, curative, and rehabilitative care. There have been calls to move beyond the “curative” framework of health and include all four in a comprehensive health care plan. If this is so, should PhilHealth use its capital on preventive and promotive care? On the other hand, some cite concerns that PhilHealth may overextend itself.Other questions correspond to the three dimensions of universal health care coverage such as “Who gets covered?” “What proportion of costs get covered?” and “Which services are covered?” Answering these questions means weighing the costs and benefits, identifying what the country really needs, and examining whether the population is truly “covered.”

Thank you so much for providing plenty of useful content. I have bookmarked your site and will be without doubt coming back. Once again, I appreciate all your work and also providing a lot vital tricks for your readers.