* This is my article yesterday in TV5's news portal,
http://www.interaksyon.com/business/44378/fat-free-economics-property-rights-and-the-cybercrime-prevention-law
--------- 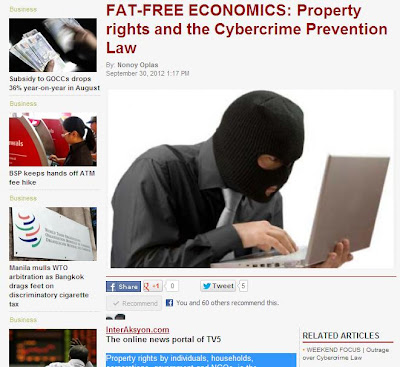 Property rights by individuals, households, corporations, government and NGOs, is the cornerstone of securing a peaceful and orderly society. A person’s house, car, computer, song, invention is his and his alone. He can use and keep them, or sell, donate, or destroy them. Having private property ownership means having exclusive use and disposition of a particular property, both physical and non-physical or intellectual property.


In the absence of clear private property rights protection, bullies, gangsters and envious people can simply use, grab or steal someone else’s car, cell phone, computer, shoes and so on, and say that those are also their property.  And society can easily degenerate into chaos and disorder as bullies can be violent in grabbing and stealing other people’s property while the real owners can also be violent too in protecting their hard-earned assets.

That is why one important function of government or the state is to promulgate the rule of law, the law on private property ownership and control, and to penalize those who will steal or destroy legally owned properties.

The Cybercime Prevention Act of 2012 or Republic Act No. 10175 - excluding a few highly questionable and dangerous sections - is a good law because it promotes and protects private property ownership of online, intellectual property materials.  It seeks to prevent theft, defamation and/or destruction of a citizen’s online properties (See the full text of Republic Act No. 10175 at the Official Gazette).

Companies, individuals, media, NGOs, other entities use portals or websites, blogs, accounts in YouTube, Facebook, LinkedIn, Twitter and other social media, to advertise themselves and their products and services, or report stories, data and opinions. If these cyber properties are altered, defaced, defamed or even shut down, that is tantamount to destruction of their private property rights and should be considered a crime or a civil liability.

As a blogger and regular contributor to Interaksyon.com, I will not be happy if my blog, articles, or my personal accounts in Facebook, Twitter, LinkedIn, Gmail and Yahoo, are altered, hacked or simply shut down by other people. If a person has the resources to track down the perpetrators of such destruction of private properties and to bring them to court, that person would be happy to have a law as basis for hailing those cyber criminals to court, to make them accountable and punish them for their actions.

In effect, by protecting private property rights, by preventing or minimizing cyber crimes via penalties, the law is expanding individual freedom, especially the freedom of self expression and social networking.

There are certain sections of the law, however, that can be abused by the government and in the process stifle if not kill freedom of expression. Such provisions were pointed out by Atty. Mel Sta. Maria in his earlier papers here in Interaksyon.com.

For example, if person A would post in his Facebook or Twitter or LinkedIn or other social network comments that are considered defamatory or libelous by a person B, then that constitutes a cybercrime. Now if person C would simply “like” or share or forward such comments to their network of friends, then that is considered as “aiding or abetting” a criminal, and hence a punishable offense, according to Sta. Maria.

Another provision that has attracted a howl of protest is the so-called “take down clause,” allows the Department of Justice to restrict or block access to computer data if it violates the provisions of the law.

This is dangerous because only the DOJ has the sole power to judge a comment in Facebook or Twitter, or a blog post or comment, as libelous or defamatory or criminal. The DOJ has unilateral action and power to take down cyber content, say a blog post or the entire blog and website. There is no remedial provision in the law that the affected individuals or parties can stop the DOJ from restricting or blocking a website or blog content and data. And this can be abused by the government to stifle individual self expression.

There are two ways to correct or remedy these anomalous provisions of the new law. One is through the implementing rules and regulations, which have yet to be crafted. The other is to enact another law amending RA 10175 and remove the above-mentioned questionable provisions.

It is possible to insert a provision in the forthcoming IRR that will require the DOJ to secure a court order before it can restrict or block the posting or publication of content and data that it deems libelous and violative of certain provisions of the law.

There are limits to what a non-lawyer can say in assessing the new law because of legal technicalities involved. But being an advocate of private property rights protection - both physical and intellectual property - it is important that a law be enacted that will expand, not restrict, the citizens’ freedom of expression.

Throwing out RA 10175 will embolden certain individuals to interfere, intercept, or alter data that are passed and transmitted to the web.

For instance, a news portal like interaksyon.com can be hacked and its headline stories can be changed to highly offensive content like pornographic materials or hateful campaigns. Or a new website using the existing trademark and logo of highly popular companies is set up to sell counterfeit products. Even if the perpetrators of such crime have been identified and caught, the existing system of penalties against them are not clear and harsh enough.


That is why we need a new law that will protect private property - intellectual properties especially - from being defamed or destroyed by other sectors of society.
---------

Addendum:
Section 4 for instance, is a good one.


SEC. 4. Cybercrime Offenses. — The following acts constitute the offense of cybercrime punishable under this Act: