This will be a continuation and expansion of my earlier paper, Pol. Ideology 15: Socialism, Conservatism and Liberalism posted last March 08, 2010. It is about a discussion paper by Stefan Melnik on Political Values -- Review of Basics, written possibly in 2008-09. These are the three major political mainstreams and the value systems that they preach. 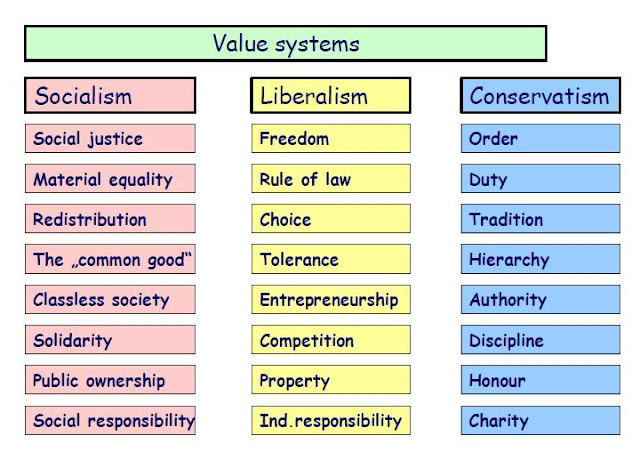 Socialism and its cousin ideology, communism, highlights or focuses on equality and forced collectivism. Equality of outcome, social justice, income redistribution, social security, state welfare and forced solidarity. These are the synonyms of their heavy focus on equality and forced collectivism. Too much individual liberty and private property are not good, according to this philosophy, so they have to be limited and heavily regulated by the state, leading to social or communal ownership of the means of production, central planning by the state and its lower organs and government agencies.

Conservatism focuses on order, tradition and conservation of existing social units.  Thus it highlights discipline, authority, hierarchy, the conservation of the nation, the family, morality. There are some similarities with socialism like the big role of state authority, distrust of spontaneity and importance of managed order. But there are also differences as there is primacy given to non-government social units like the family, clan and private enterprises.

Liberalism focuses on liberty or freedom, individual liberty specifically and individual responsibility. Liberty and responsibility are closely and strictly intertwined, one is not possible without the other. With more individual liberty, spontaneity, diversity and inequality are inevitable. Tolerance of such diversity and spontaneity among people, their right and choice to be industrious or be lazy, their private property ownership, are part of human rights that are to be respected under strict respect of the rule of law, equal application of the law on unequal people.

I like the matrix and simple discussion made by Stefan. My philosophical and ideological bias of course, is towards liberalism. I believed in socialism and Marxism in my younger and university days in the 80s, I even attended a three months course in Amsterdam on Marx, Lenin and Trotsky in the late 80s before the Berlin Wall collapsed. But I have abandoned that ideology by the 90s. I briefly outlined my political transformation from socialism to free market philosophy here, Pol. Ideology 35: Why Liberty.

While Stefan did not expound on other ideologies, he made this expanded chart. 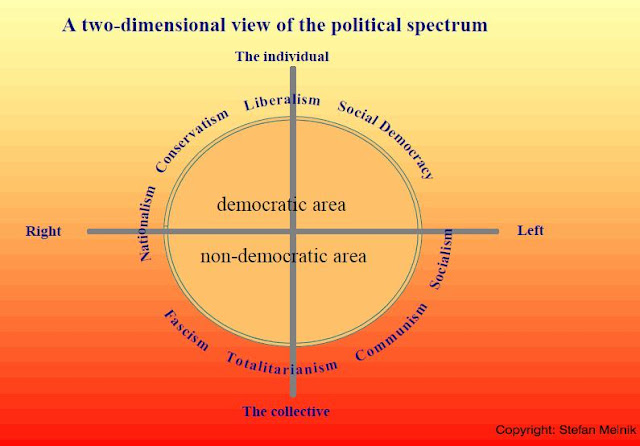 The delineation on left vs. right I think, is not particularly useful. For me, ideologies that emphasize the individual represent the "right" in the political spectrum while ideologies that emphasize the state and the collective represent the "left." There are ideologies on the "center" of course, sort of "center-left" and for me, that would include conservatism, nationalism and social democracy.

Question: 1 Many political parties and groups in the Philippines and abroad, emphasize the battle for "good governance" and "fight corruption." Where do they belong in the ideological spectrum from left to center to right?

I think they belong to the left and center-left camp. They all advocate BIG or more government, but "reformed, good and accountable" government. Notice that this is also the main advocacy of the multilaterals and foreign aid agencies, from the UN and its dozens upon dozens of attached agencies, to the WB, IMF, ADB, USAID, CIDA, JICA and so on.

Question 2: Where does Objectivism, the philosophy pioneered by Ayn Rand, fall in this ideological spectrum?

From my understanding and limited reading of the works by Ayn Rand, this philosophy is very close, but not identical, to liberalism. There is huge primacy or focus given to the role and responsibility of the individual, not the collective.

Liberalism, the primacy given to individual freedom and individual responsibility, the distrust of forced collectivism and central planning, is indeed a very radical political ideology. There is no single shade of liberalism though. There are libertarians (anarchists, minarchists), classical liberal, and social liberal. I am not so familiar with the specific differences among such shades of liberalism.

I consider myself a minarchist libertarian and I do not believe in anarchy or zero government. I believe there is one important function for government, and that is to promulgate the rule of law, as the final "referee" when civil society or private referees are not able to enforce their judgment to conflicting individuals and/or institutions. To make the law apply to everyone, both governors and governed, both administrators and the administered, no one is exempted from the law and no one can grant exemption from the penalties prescribe for violating certain laws. In short, to make the law apply equally to unequal people.

By strictly adhering to the rule of law, I believe that this will inevitably lead to a small or lean or minimal or limited government, with a single and clear purpose of protecting and expanding, not restricting, individual freedom. By penalizing bullies who prevent other people from pursuing their individual happiness and liberty through harm and aggression, a limited government is a friend of the philosophy of expanding individual liberty.
----------

I posted the above article in two fb groups, the Ayn Rand Fans in the Philippines, and the Filipino Liberty groups, below are our additional exchanges:

Froi "From my understanding and limited reading of the works by Ayn Rand, this philosophy is very close, but not identical, to liberalism. There is huge primacy or focus given to the role and responsibility of the individual, not the collective."

Very interesting read, Nonoy Oplas. Although I'd like to clarify, based on my reading of Rand's works, that the difference between Objectivism and Liberalism is that the former is a holistic philosophy, while the latter is a political theory. Objectivism does not merely focus on politics, as it is just one of the five branches of philosophy. In politics, Objectivism champions free market capitalism, which Rand defined as "a full, pure, uncontrolled, unregulated laissez-faire capitalism—with a separation of state and economics, in the same way and for the same reasons as the separation of state and church."

My view is that liberalism is simply focused on politics, and to be effective and able to defend man's rights and freedom, it needs to be grounded in a holistic philosophy for man. For example, what in Liberalism is the nature of man. What is the ethical system for man? Ethics and epistemology are the base of politics. How does a political theory view man's ethics? Should man embrace altruism or rational self-interest? Is individualism or capitalism consistent with altruism or rational self-interest?

Nonoy  Good points Froi. I have not read yet the other literature of liberalism outside of political theory. I would like to believe that because of the high primacy of individual liberty in liberalism philosophy, it is implied that man by nature, is rational, that he is capable of deciphering what is good or bad for himself, his household and community. That is why central planning and forced collectivism is taboo and unacceptable in that philosophy. That man can manage his own life, that of his HH and community without external coercion. Coercion applies only to bullies who intend to cause harm and physical aggresion on other people.

Thanks Alejandro. There is indeed clear similiarity between liberalism and objectivism in both political theory and advocacy. Limited and lean government, not zero government. Ensuring individual freedom and private property, not equality of social outcomes among people.

Paul  Objectivism is pretty much classical liberal in its principles

Casey  According to this article, the laws you are looking for from government can be gotten much more efficiently and cheaper. Useful contribution for this topic. http://www.24hgold.com/english/news-gold-silver-securing-property-rights-in-the-absence-of-a-state.aspx?article=4083088670G10020&redirect=false&contributor=George+F.+Smith


Nonoy Thanks Casey, I saw the article. I have several cases, hypothetical or actual, that a zero government is impossible.

One, village A has its own "mini-government": Elected officials with fixed terms, appointed and hired bureaucrats and administrators to support the elected officials. There are monthly or annual dues that all residents must pay by coercion, otherwise non-paying residents will be blacklisted, their names will be publicized, and later be asked to leave the village. There are also other fees/revenues by the village that people must pay via coercion, like car stickers, IDs for house helpers/drivers, etc.

Two, village B, a neighbor of A, has its own "mini-government" too. Problem is that residents here are more noisy -- they have loud karaoke almost every night, they have various gambling like tupada or cock fighting, they have frequent parties and fireworks and firecrackers, etc., so that residents of village A are often disturbed. Since their "mini government" has no jurisdiction over the residents there, they will have to talk to the "mini-govternment" of village B. What if the latter will side with its residents and will not ask the noisy residents to stop their noisy lifestyle? To whom will villlage A turn to?

Three, most likely an inter-village association (IVA) composed of neighboring villages in a particular area is present, to settle whatever inter-village disputes. Such IVA will, again, have its own set of local politicians that were elected from among village officials, with fixed terms of office, with a support staff and bureaucrats, all paid by mandatory contributions from all residents, aka village tax.

These mini-governments though, do not have Department of Education, Dept. of Health, Dept. of Agriculture, etc. Their main function as lean and limited governments, is mainly to enforce private property rights, keep the peace within and among villages.

Lesson: a zero government is simply impossible as even voluntary associations have their own set of elected politicians and collect dues or revenues via coercion.
-------------