One common practice of the man-made warming leaders and campaigners is to block off people who often question their religion. I have confirmed that once more two days ago when I checked my twitter account. I have observed earlier that after questioning several tweets by Greenpeace Philippines, they blocked me from following them, I posted it here, Greenpeace is Blocking You, November 19, 2011.

When I checked again last Monday, this is the result. 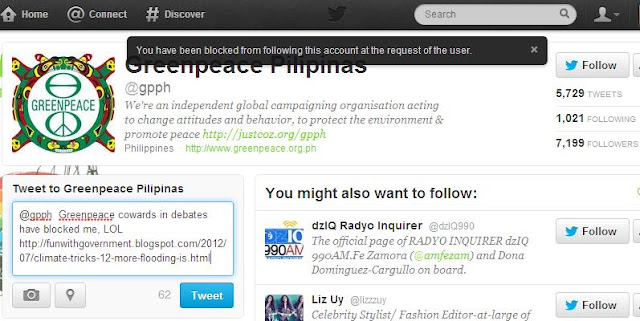 Cowards, as usual. They only need people who will pat them in the back as "planet saviors". Well, at least I sent them this tweet, "cowards in debates..."

Another cousin or sibling in cowardice but sibling in climate alarmism and noise is the World Wildlife Fund (WWF), their WWF-Philippine office also blocked me. No tears guys, sorry.

Oh, the perennial Philippine "climate negotiator" for two decades or more, Dean of the Ateneo School of Government (ASoG), Atty. Tony La Vina, also do not like me questioning his "save the planet" mantra. But at least I sent this tweet to him, "Warming fanatics blocking me..."

We used to be "friends" in facebook. When they went to Copenhagen for the UN FCCC meeting in December 2009, he kept posting photos and updates, I would ask some questions, he won't reply. Then another UN FCCC meeting in Cancun, Mexico in December 2010, he was posting some photos and updates. I read in BWorld that there were 51 Philippine delegates to help save the planet, I asked him why so many taxpayers-funded delegates and negotiators, he replied there were only 30+ of them. Then I asked who are those people and in what capacity they represent the Philippines, his reply was cool: he unfriended me.

Right, be among the loud supporters of Freedom of Information (FOI) bill in Congress, but when you ask them information pertaining to government activities and spending, they will be among the first to withhold information.

Ummm, famous singer and environmentalist Jim Paredes also blocked me. I don't understand why because while I would be harsh on Greenpeace, WWF, UN (IPCC, FCCC, UNEP, WMO, etc.), Al Gore, etc., I was less aggressive to other warming leaders. Also, my last tweet to him were nearly one year ago. Hmmm, but no tears Jim, keep tweeting how to save the planet, even if the planet is fine and does not need any savior.

According to a graph published on the NASA Earth Observatory site, Arctic temperatures were warmer in 1930's than at the end of the 20th century. In addition, the graph shows the Arctic warmed ~1.6C over the 19 year period from ~1918-1937 at a rate of 0.84C/decade, 75% faster than the 0.48C/decade from 1980-2000. Thus, alarmist claims that recent Arctic warming is unprecedented or accelerating are bogus.

Posted on July 23, 2012 by Anthony Watts
The question of “which comes first, the temperature or the CO2 rise?” has been much like the proverbial “which came first, the chicken or the egg?” question. This seems to settle it – temperature came first, followed by an increase in CO2 outgassing from the ocean surrounding Antarctica.
“Our analyses of ice cores from the ice sheet in Antarctica shows that the concentration of CO2 in the atmosphere follows the rise in Antarctic temperatures very closely and is staggered by a few hundred years at most,” - Sune Olander Rasmussen

You're being a dick, man. Good luck convincing people to believe you.

See the language of the warming religionists. But unlike their camp which censor or block unfavorable opinions, all contrary opinions allowed here. So, blurt out more.

Has you ever occurred to you that perhaps their Twitter followers flagged your post as spam or abusive considering the tone of the language that you are using.

Possible but read again the note in their twitter page, "You have been blocked from following this account at the request of the user."

Besides, the proponents of man-made warming have the burden of defending it anywhere, anytime considering the large amount of government climate and energy regulations, carbon taxation, climate bureaucracies, climate loans, etc. that have been created and contracted.

Poor comprehension, Gabby D. Chart 1 says the Arctic was warmer in the 30s than the present, so the argument of the AGW camp of "unprecedented warming", no precedent or no prior warming, is wrong.

Chart 2 says it's temperature that leads to CO2 concentration. The AGW camp says it's the reverse, that more CO2 leads to more warming, and this again, is slam-dunked by the two studies in that chart.

"He explains that one of the theories is that when Antarctica warms up, there will be stronger winds over the Southern Ocean and the winds pump more water up from the deep bottom layers in the ocean where there is a high content of CO2 from all of the small organisms that die and fall down to the sea floor and rot. When strong winds blow over the Southern Ocean, the ocean circulation brings more of the CO2-rich bottom water up to the surface and a portion of this CO2 is released into the atmosphere. This process links temperature and CO2 together and the new results suggest that the linking is closer and happens faster than previously believed."

see, he explains why the lag behavior is the way it is; which has NOTHING to do with anthropomorphic global warming.

it has NOTHING to do with the theory of greenhouse gases can cause changes in the climate.

Poor understanding again. The AGW hypothesis is very adamant in its position: CO2 leads temperature change. So more CO2, more warming. The WUWT article on Antarctica says it's the reverse. So the AGW assertion is pure fiction.

NO. please quote anything in that paper that goes against anthropomorphic global warming. it should be easy.

as the part i quoted said, warming releases CO2. no problem -- nothing in anthro warming says that cannot happen.

please, point to ANYTHING in that paper that proves that that didnt happen. ANYTHING.

Getting emotional with lots of all caps eh? :-)

As the opening paragraph above says,

"The question of “which comes first, the temperature or the CO2 rise?” has been much like the proverbial “which came first, the chicken or the egg?” question. This seems to settle it – temperature came first, followed by an increase in CO2 outgassing from the ocean surrounding Antarctica...."

your comment proves my point. this has nothing to do with man made global warming.

also, on the issue of banning...

i dont know what u wrote so i cannot say. my own take is as long as you want to communicate, banning is wrong.

but if all you want is to insult, or harangue, then by all means, ban them.

thanks for hanging on. Invite other warmers to visit and debate here. I assure you, all counter-arguments are 100 percent allowed, zero banning or blocking, unlike the chief warming priests and priestess WWF, Greenpeace and Tony la Vina.

Based on your understanding, what exactly is the AGW Hypothesis? This will aide in focusing the discussion on AGW, not anything else.

So, what's your point with the link you posted? If you really understand the debate, post your ideas, not a link of what other people think.

By the way, vile language will get you nowhere. Just shows your very poor upbringing.

Good point about the Koch-funded study.

What exactly is the good point of the Koch-funded study?

Noy, you forgot to mention the greatest of the AGW pompom-ers, the One, Albert Arnold Gore! Who does not take questions either. Ever.

No further comments from the two persons who support man-made global warming (AGW)!!! This validates the idea that people who support AGW either don't have any clue what it's all about or have a very grave misunderstanding of the hypothesis.

No further comments from the two persons who support man-made global warming (AGW)!!! This validates the idea that people who support AGW either don't have any clue what it's all about or have a very grave misunderstanding of the hypothesis.

Al, I think all warming fanatics who drop a comment here are either anonymous or have aliases, cannot give their full name and affiliation. Another indicator of cowardice.