* This is my article yesterday in TV5's news portal,
http://www.interaksyon.com/business/38127/fat-free-economics-sona-the-national-budget-and-debt
--------- 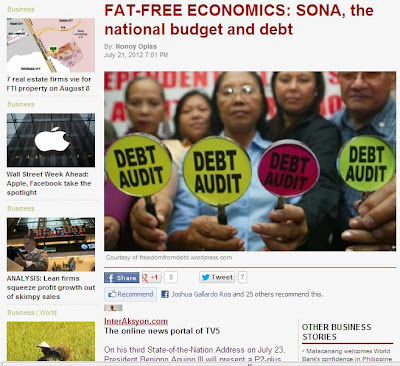 On his third State-of-the-Nation Address on July 23, President Benigno Aquino III will present a P2-plus trillion budget for next year. The budget is among the most important features of a SONA. It is a direct way of the President saying, “I want to achieve these goals next year and please authorize me this money.”

The P1 trillion budget mark was breached in 2006 and the P2 trillion mark will be set next year, or a span of just seven years. Here are the budget data from 2006 to 2012 taken from the Department of Budget and Management’s Budget of Expenditures and Sources of Financing on years indicated.

Interest payment has been the single biggest item in the annual budget. For the past seven years including 2012, an average of P22.60 out of every P100 went to interest payment alone.

The direct implication is that the old and endless argument that “government does not have enough money” is simply not true. Government does have plenty of money, but more than a fifth is used to pay its debt. So if government wants to reduce its interest payment and use more money for various services, all it has to do is to drastically cut its annual borrowings. Better yet, stop borrowing even for a year, learn to live within its means and surprise itself that it can survive even without new borrowings.

The second biggest item in the annual budget is subsidy to local government units– the provincial, city, municipal and barangay governments. Over the past seven years until 2012, this item constituted 16.6 percent of the annual budget. And the LGUs are not totally dependent on this transfer. They also have the power to create and collect local taxes, fees and fines, so that total government spending, national plus local, is huge. 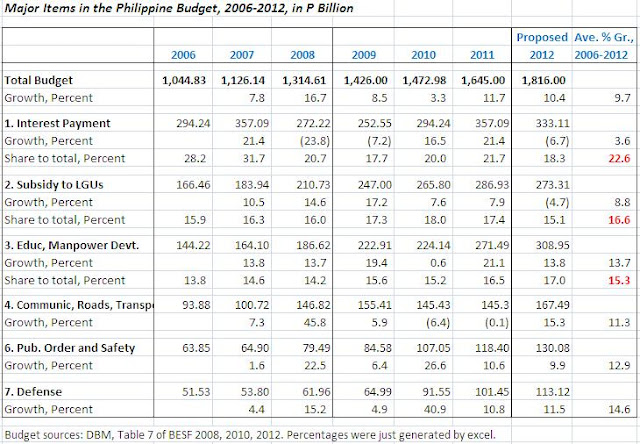 One may wonder how the government has accumulated the debt. Below is the direct explanation: each year, expenditures were always larger than revenues, with or without economic turmoil, with or without elections. The culture of over-spending, of waste and fiscal irresponsibility, is present in all administrations until the current one. 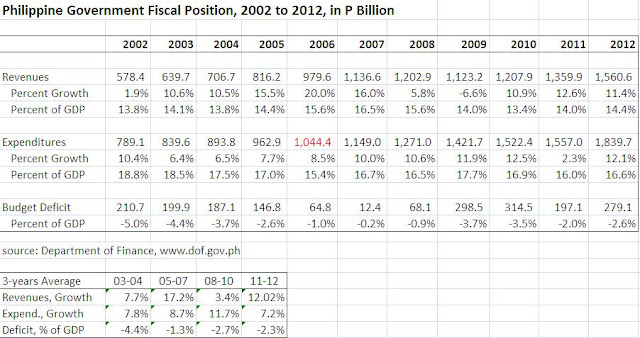 The good news is that it is possible to have zero deficit and zero borrowing even for a year because this nearly happened in 2007, when the deficit was only P12.4 billion or 0.2 percent of gross domestic product.

We have seen the direct cause of rising public debt. The table below will show how the debt has stockpiled over recent years. The P2 trillion debt mark was reached in 2000 (the last year of the Estrada administration) with a P2.17 trillion debt. In just three years, the P3 trillion mark was broken with a P3.36 trillion debt in 2003. That should be one of the biggest “achievements” of the Arroyo administration.

But in fairness, the Arroyo administration also cut its borrowings in the succeeding years so that the P4 trillion barrier was reached five years after, with a P4.22 trillion debt in 2008. 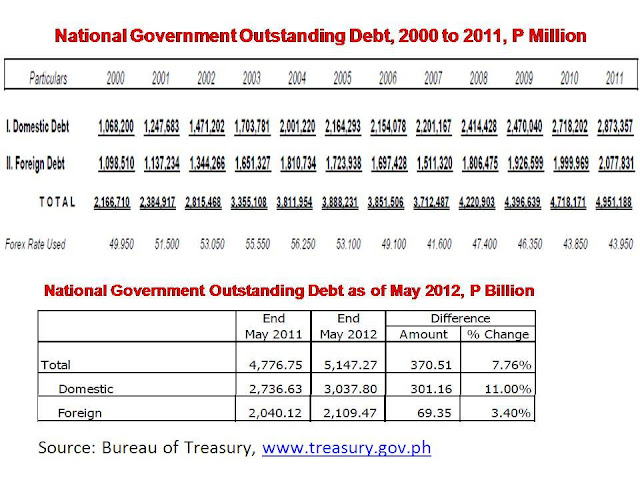 The PNoy administration breached the P5-trillion debt mark in March this year. The latest data from the Bureau of Treasury shows a P5.15 trillion debt as of May 2012.

Some sectors always harp on their apology and justification that “more borrowing is fine so long as our capacity to pay is there, if not improved.” Really?

If our capacity to pay growing debt has indeed improved with rising economic activity and GDP size, then how come the government is biting on high interest, long-term loans? If one is not desperate for more borrowings because its capacity to pay debt is improving, then one should shun and avoid those high interest loans. But this did not happen. See the table below from DBM’s BESF 2012. 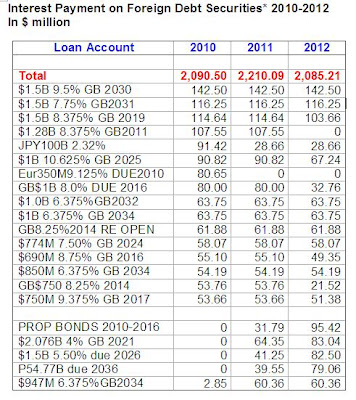 So if we are to make one wish in the President’s SONA, here is mine: Drastically cut, if not stop, borrowing even for a year, force the entire government bureaucracy, from Executive to Legislative to Judiciary, to live within their means. If not in 2013, perhaps in 2014.

Come on Mr. President, surprise us, surprise yourself and your political detractors. Mrs. Arroyo nearly did it in 2007. You can do it too. Just cut the fat and pork in many government bureaucracies, programs and projects.
--------