Welfarism 21: Is Malaysia a Welfare State?

Welfarism in Europe and North America is slowly crumbling. The less ambitious, the irresponsible, can be rewarded by the expensive government welfare programs while the hard-working can be over-taxed to finance this scheme and governments over-borrow to bridge the funding gap between high spending and lower revenues. And that largely explains why these developed economies are now mired in huge public debt burden.

A number of Asian economies are trying to imitate this model of a nanny state. Below is a good article by a good friend from KL, Wan Saiful Wan Jan. Reposting. 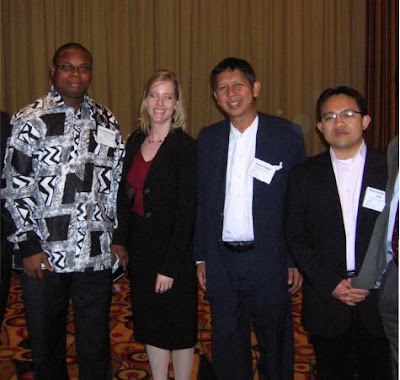 Photo taken in April 2009, during the Atlas Liberty Forum in Atlanta, Georgia, USA. Wan is rightmost. Beside me were Colleen Dyble then of Atlas, and Franklin Cudjoe of Imani-Ghana, a free market think tank there. I would see Wan and other Asian friends yearly since then, in several Asian regional meetings or conferences of free market groups, like the EFN Asia Annual conference.
---------

Is Malaysia a welfare state?

Speaking at a Chap Goh Mei event in Klang earlier this year, Prime Minister Dato’ Sri Najib Tun Razak said that any attempt to turn Malaysia into a welfare state could result in an economic disaster. Najib was reported to say that welfare states will eventually lose their competitive advantage due to an onset of complacency.

The Prime Minister is absolutely right in making that claim and his resoluteness should be applauded. Welfare state is most certainly not the best way forward for our country.

As we have a long history with Great Britain, perhaps it is worth refering back to British history when discussing the concept of welfare state. The man widely seen as the architect of modern British welfare state is Wliiam Beveridge. An economist and social reformer, Beveridge was asked by the British government in 1941 to draft a report on how Britain should be rebuilt after World War Two.

The Beveridge Report was subsequently published in 1942. In the report, Beveridge recommended that the government fights against five “Giant Evils” of “want, disease, ignorance, squalor and idleness.”

And when Labour’s Clement Atlee defeated Winston Churchill in the 1945 general elections, Atlee committed his government to implementing many of the recommendations set by Beveridge. As a leftist party, it can only be expected that Labour would jump at the opportunity to increase the role of government. And that was the beginning of the modern British welfare state.

Through the Family Allowance Act 1945 families with children receive an allowance to help them with childcare, commonly known as the child benefit.

The National Insurance (Industrial Injuries) Act 1946 is something similar to our SOCSO. Workers who are injured or become disabled as a result of performing their jobs would receive compensation through this act.

The National Insurance Act 1946 provides even more social security to Britons by expanding the provisions of the original Act first introduced in 1911. Through the national insurance scheme, the public pays a regular contribution to the government, and in return they receive a wide range of benefits including unemployment benefits and government pension.

The National Health Service Act 1946 created a taxpayer-funded national healthcare system. The Act has has several changes since it was first introduced, but, the principle of free healthcare remains until today in the United Kingdom.

And of course there are many more later additions to the welfare state schemes in Britain up to today. James Bartholomew, author of the double award-winning book “The Welfare State We’re In” lists, among others, free education, government housing schemes, government pension schemes, and government-backed social security schemes as elements of today’s British welfare state.

It is difficult to summarise Bartholomew’s 381-pages book in this short article so I urge readers to grab a copy if they want to know more about the dangers of a welfare state. But to summarise, Bartholomew argued that decades of welfarism has created a British society that is poorer that they otherwise would have been, greater unemployment, greater dependency on government, higher crime rate, and a less decent and civil society.

So when Prime Minister Najib declared his newfound stance against welfare state, we really should applaud him. I say it is new found because just a few months before his speech in Klang this year, Najib was actually supporting welfare state.

In fact, in June 2011, Najib was reported to have said that the policies of UMNO and BN fits better in the welfare state concept because they were the one who introduced free education, free healthcare, subsidies for food items, and subsidies for fuel.

To hear the Prime Minister changing his mind about welfare state after firstly supporting it is definitely good news.

Nevertheless, I am worried that not the government is flip-flopping again, especially because we are now seeing the rise of welfarism inMalaysia to a ridiculous extent.

Malaysia can now boast new inventions in welfare statism that would put even communist China to shame. Just take a look around and we will see how, in just a few months, the number of government interventions in the name of welfare provision has increased tremendously.

The RM500 given to those with household income of less than RM3000 was only the starting point of this new wave of welfarism.

Even schoolkids are not left out in welfare state Malaysia. They received free vouchers and even pocket-money for no obvious reason at all.

And who would have thought we would see a government dishing out free tyres to taxi drivers? Indeed Malaysia Boleh!

We also now have minimum wage, and there are talks about introducing unemployment benefits. Both of which are prominent facets of a welfare state.

All these are signs that we are sliding fast towards the welfare state concept that our own Prime Minister has initially rejected. This is a worrying development, and, unless checked very soon, I fear Dato’ Sri Najib’s prediction that welfare state could result in economic disaster for the country could indeed become true.

–
Wan Saiful Wan Jan is chief executive of the Institute for Democracy and Economic Affairs.
---------