Migration and Freedom 18: Getting a Philippine Passport

There is good news for us Filipino passport applicants, or renewing our expired or about to expire passport. The Department of Foreign Affairs (DFA) Consular Office will open up many satellite offices nationwide starting next month. For Metro Manila alone, there will be DFA passport processing offices in Robinsons Galleria in Ortigas (next month), SM Megamall and SM Manila (September) and Ayala Town Center in Alabang (October). This means lesser congestion at the current DFA Consular Office in Macapagal road, Pasay City near the SM MOA. 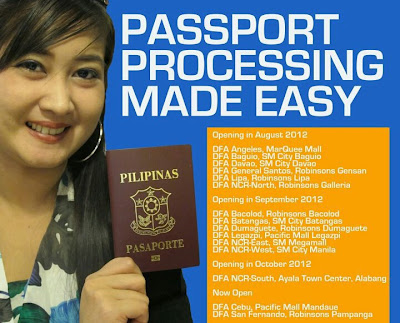 While this is a good development, more improved services that I hope to see soon are:

1. Schedule of personal appearance (for the electronic photo and signature) with all the requirements should be within five working days from the time of online or phone call application, not the current two or more weeks

3. The length or expiry of passport should be five and a half (5 1/2) years, not the current five. This is because one cannot travel abroad if the passport will expire within six months, so that the effective life of a passport is only 4 1/2 years although its official life is 5 years.

For instance, my current passport is expiring on April 17, 2013. I may have a trip to HK this coming early November 2012. This means I need to get a new passport again by October because I can no longer use my current passport which technically, will expire next year. What a bummer. More money to surrender to the DFA soon, P950 for regular processing, P1,250 for the express service.

Over the long term, beyond my lifetime, I wish to see the visa system of countries be abolished. People mobility should be respected, people should just bring their passport as their "national ID" when they travel abroad, and they cannot be given a passport by their government if they have some criminal liabilities in their countries. Or if they have valid passports already, they can be prevented from leaving the country pending resolution of their criminal cases.

My wife and two daughters are not here, they flew to Hong Kong yesterday and will come back tomorrow evening. My wife saved from her second job, paid for their trip including that of her sister who travelled abroad for the first time, and will be her assistant in watching the two young girls especially when they go to HK Disneyland. 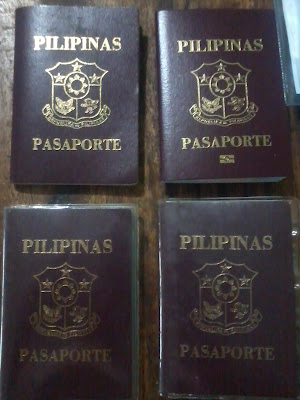 I got my younger daughter's passport only last Tuesday or three days before their departure. The four of us have passports already. My elder daughter got her passport in May 2008. I brought her and my wife to Hong Kong in June 2008 when I attended the 2nd Pacific Rim Policy Exchange where I was given a travel scholarship (plane fare, hotel, registration fee, all free) by the main organizer, the Americans for Tax Reforms.  My daughter was only 1 year and 8 months old then.

Before I discuss the current procedure in getting a passport, here is what I wrote nearly five years ago.
--------

Getting a Philippine passport

Recently, the Department of Foreign Affairs (DFA) has come up with machine-readable passport (MRP), a first for so many years. It was a very welcome development, and I heard that credit specially goes to Assistant Secretary Doy Lucenario.

With that one good job done, another job that I hope the DFA will do, and it should do, is to reduce the long queu of people applying for a passport. When I went there last year to renew my passport, no less than 8 undesirable- looking guys immediately approached me while I was walking towards the DFA in Roxas Bblvd. A few of them even told me that the passport application form I downloaded from the DFA website is not valid, that I should get a valid form at a nearby shop. Of course when you follow him/them, more guys will surround you so that they can fool you somehow.

A friend of a friend who was applying for her passport for the first time just 2 months ago was robbed by fixers of P1,600 "service fee", a service that never came. These guys are very friendly and courteous to prospective victims, and they thrive on two things: complexity and time-consuming, if not chaotic, procedures in getting a new (or renewing) passport, and ignorance and gullibility of potential victims. Of course one can make malicious conspirary theories like some of these fixers are in cahoots with some DFA personnel, and the latter get a percentage from the earnings of those fixers.

In my case, when I applied for the renewal of my passport last year -- because passports expire after 5 years -- a friend who has a friend at the DFA, helped me so I went to the "courtesy lane" (CL). This lane is for families and friends of DFA personnel, other government personnel. The purpose of this lane is to fastrack the application of these people from an otherwise complicated and time-consuming process if one is just an ordinary Filipino citizen, and have opted to personally go there, not through some travel agencies who charge an extra professional fee to do the job.

Before you go to the CL, you go to one rather vacant room in the DFA (well, I noticed that there was more than 1 vacant room, or room with tables but no staff working there). A staff will get your referral letter, then he or she will write to the guys at the CL to give you the privilege of being accommodated at that lane.

At the CL waiting area, there are many other people -- from uniformed soldiers and policemen to relatives or family members or friends and neighbors of this and that government official. After a few hours (submission of forms, payment, etc.) you can leave that office and come back on a specified date to get your new passport.

Outside, there is still a long queu of ordinary Filipinos who have no "connection" with some high government officials, or maybe they have, but they do not know that there is such as thing as CL and that they can possibly avail of it too.

How to reduce the long queu of passport applicants at DFA? Among the measures that I can think of are the following:

(a) Passport application office should be open 12 hours a day, 5 days a week, say from 7am to 7pm, no noon break. Additional staff may have to be hired for this. Or,

(b) If they want to stick to an 8 hours/day office, the office should be open until saturdays and sundays. Again, additional staff may have to be hired. Or,

(c) Better that the office be operating 12 hours a day Mon-Fri, 8 hours on Saturdays.

(d) Decentralize application procedure to a few accredited travel agencies, in addition to regular work in the DFA.

When you spread that big number of passport applicants over a longer period of time, the per hour queu is shortened.

What the DFA did so far, is to have regional DFA offices where people from the region can apply passport. Still it's too centralized in one city for the whole region.
-------- 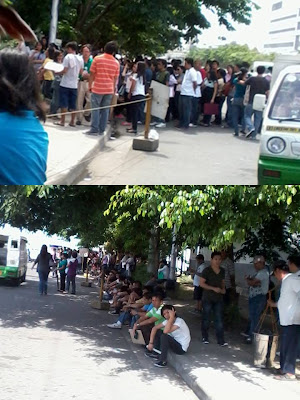 I wrote about the long queues at the DFA passport division then. Well, the long lines are still there, everyday. Here are two photos I got four days ago. These are at the main entrance of the new DFA Consular Office, Macapagal Blvd, Pasay City, not far from the SM Mall of Asia.

Inside the Consular section, there are long queues too. I did not take photos though.

The requirements to get a passport for my below two years old daughter were simple:

Traveling with mother only:


* Passport of mother, original and photocopy.
* Original Birth Certificate from NSO in SECPA
* Personal appearance of minor with either parent.

Getting an appointment online is simple, but for those who have no access to the internet, they have to call a customer service agent (service is free, at least) and be interviewed by phone, normally would take about 15 minutes.

Problem is that if one is rushing to get a passport due to some emergency situations, the soonest time that one can get to have an appointment is about one week from the time he/she has applied online or called the customer service center. After the personal appearance on appointment day, the soonest time to get the passport is after seven working days for express service (fee is P1,200) while who are not rushing can opt for the regular service, passport released after 15 working days (fee is P900).

A Philippine passport has an official life of five years before it will expire but technically, has only 4 1/2 years old validity because a person cannot travel if the passport is expiring within six months. He/She must get a new passport again.

This means lots of revenues for the DFA as tens of millions of Filipinos get a new passport every 4 1/2 years or so.

Meanwhile, my daughter's passport application was also rushed. A staff of the Passport division who is a friend of my friend from UP, a veteran labor attache, helped my wife in getting an earlier appointment, and in facilitating quick processes, they were spared from long lines.

Still, I wished that the DFA Passport Division will end those long lines. Get more staff if necessary, be open 12 hours day, or be open 6-7 days a week if necessary. When you make a person with work stay for half day just to get a passport, and there are thousands of Filipinos that line up there each day, that is several millions of man-hours that are wasted.
--------

i am really excited Getting a Philippine Passport. there have penalty of business opportunities. thanks for introducing this post.