Climate Tricks 11: Coal and James Hansen, RE Law and the WWF 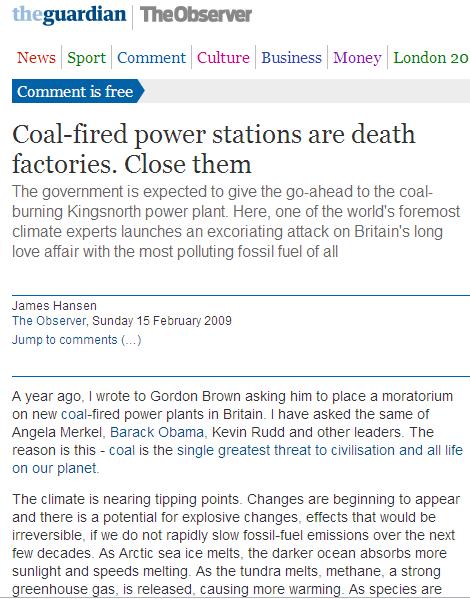 A year ago, I wrote to Gordon Brown... causing more warming. As species are exterminated by shifting climate zones, ecosystems can collapse, destroying more species....


Our planet is in peril. If we do not change course, we'll hand our children a situation that is out of their control. One ecological collapse will lead to another, in amplifying feedbacks.


practically all of the glaciers could be gone within 50 years - if carbon dioxide continues to increase at current rates. Coral reefs, harbouring a quarter of ocean species, are threatened...


Clearly, if we burn all fossil fuels, we will destroy the planet we know. Carbon dioxide would increase to 500 ppm or more. We would set the planet on a course to the ice-free state, with sea level 75 metres higher....


Coal is not only the largest fossil fuel reservoir of carbon dioxide, it is the dirtiest fuel. Coal is polluting the world's oceans and streams with mercury, arsenic and other dangerous chemicals. The dirtiest trick that governments play on their citizens is the pretence that they are working on "clean coal" or that they will build power plants that are "capture-ready" in case technology is ever developed to capture all pollutants.

Can one believe that?
* coal is the single biggest threat to civilization
* climate nearing tipping points, destruction of more species
* planet in peril, ecological collapse will lead to another
* all the glaciers could be gone in 50 years (by 2059)
* sea level 75 meters higher (about 25 storeys high building, gasp!)
* death trains, coal power plants are factories of death.

Wow, one wonders if it was an objective scientist or an environmental priest who wrote that.

Here's a recent update about that story,

I posted my article Fat-Free Econ 16: Coal, Climate and Government in my UPSEAA yahoogroups, there were a few exchanges. I am posting a summary of my arguments there.

About the greenies who might get angry at my article, I have actually challenged them to a debate a few times in the past -- in direct emails, yahoogroups, facebook, twitter, etc., there is only one standard reply: the sound of silence. I think it is their favorite song too by Simon and Garfunkel.

About the proposal by the NREB to impose a carbon tax, here is the news report.

MANILA, Philippines - The National Renewable Energy Board (NREB) is pushing for a "carbon tax" on power plants that run on fossil fuels to help offset the cost of renewable energy projects.


During the 2nd Philippine Renewable Energy Summit, Pete H. Maniego Jr., NREB chairman, said the government should consider imposing a tax similar to that in India to support renewable projects.

Fellow UPSE alumni Vince Perez, I think, is a key figure for many of these renewable energy (RE) rackets. The RE law of 2008 was enacted when he was DOE Secretary. When his term ended, he became WWF President or Chairman, and WWF is a monster lobbyist for climate alarmism and racket, so WWF is among those pushing for the full enactment of the RE law and the feed in tariff (FIT) scheme. He also owns two power companies engaged in wind power, including the poster photo wind farms in Ilocos.

I follow Viince on twitter. Last May 08, 2012, he was attending one of those international fora how to save the planet, he was tweeting what was going on, I was replying to his tweets, like these:

He did not reply.

I also replied to tweets by the Climate Change Commission (CCC) last May 7 and 8 this year,

And none of them too, would reply.

The problem with the climate racket is that it is the UN and the multilaterals, WB and ADB included, which are the big alarmism pushers, no different from those drug pushers. For these banks, climate mitigation loans, climate adaptation loans, renewable energy loans, electric tricycle loans, etc. are cute ways to extort more money from taxpayers in the name of saving the planet.

Then the rent seeking greenies like the WWF and Greenpeace play tango-salsa-el bimbo with the UN, multilaterals and national governments. Each of them happy milking more money from our pockets, telling us what power sources we can put up and subsidize, and which ones to demonize if not kill.

2. March 2008, the 1st International Conference on Climate Change (1st ICCC) organized by Chicago-based skeptic and free market think tank, Heartland Institute, was held in NYC where the UN holds its main HQ. IPCC top gurus led by its chairman, non-scientist (he's a transport and energy economist I think) Rajendra Pachauri, Al Gore, Dr. Michael Mann (author of the infamous Mann-made warming hockey stick graph), etc. were all invited, and all of them have one response: the sound of silence, not a single shadow from them showed up.

3. March 2009, the 2nd ICCC was organized again by Heartland, also in NYC, close to the UN guys, and they were all invited again, and they all did not show up. How coward can one get? You scare the world with all the alarmist claims and when you are challenged face to face to a debate, you chicken out?

What the warming religionists usually do, is to dig dirt on Heartland Institute, Roy Spencer, Lord Moncton, Willie Soon, WUWT and Anthony Watts, etc. The typical shooting the messenger, not the message. If one will return the favor, then one will also dig dirt against James Hansen of NASA, Al Gore, Pachauri, Michael Mann, Phil Jones, Lord Stern, etc., and people will end up hurling personal attacks against each other and be sidelined from producing hard data on whether man-made warming, as opposed to nature-made warming-cooling cycles, is true or not.

"Measuring pollution properly would help determine the right amount of consumption tax. Otherwise, it would sound just like a lot of pontificating and guesswork."
-- Gary M.

Yep, that is why I showed a chart in my article, global air temperature (lower troposphere, satellite data by UAH and RSS) vs CO2 concentration. The "causality" between the two is absent or not clear. And we go back to an earlier discussion in the yahoogroups: Is CO2 as emitted by burning fossil fuel, coal power, etc. a pollutant and evil gas? Yes or No.

The warming religionists say Yes but cannot produce the most recent data to back it up. They can show
(a) air temperature data, lower or upper troposphere;
(b) land surface temperature (corrupted data from GISS-NASA is often used, but Had-CRU data, although partly manipulated, is generally accepted),
(c) sea surface temperature (AMSU satellite data, or Bureau of Meteorology Australia data), even
(d) sub-sea surface temp data.
---------

Meanwhile, here are some recent charts on climate, and news clips of catastrophic heat wave in the US.

1. From Pierre Gosselin of NTZ, July 16, 2012,
Swiss Weather Expert: Tendency For Storms Has Increased, “Even If This Cannot Be Confirmed Statistically”

Reader Josef Kowatsch now shows us that German summers have not only gotten wetter, but have also gotten cooler thus completely contradicting the “unquestionable” forecasts made by the “sophisticated” models of the Max Planck Institute for Meteorology in Hamburg.


Here’s the chart Mr. Kowatsch sent me by e-mail, one that the press refuses to acknowledge:


The linear trend for the summer over the last 15 years is constant at 17.4 °C. After this summer it will decline slightly, as the polynomial curve continues downwards after 2011.


In the vocabulary of climate science, one thing is becoming very clear: “accelerating” means “disappearing 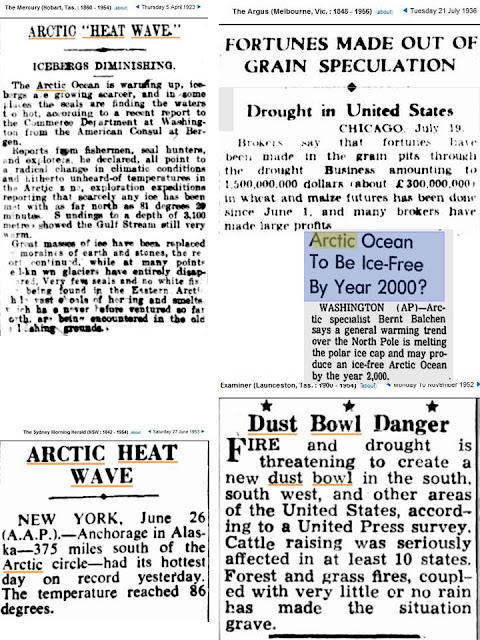