Last June 29, 2012, the Coalition for Health Advocacy and Transparency (CHAT) held a meeting-discussion at the PRRM building, Quezon City, on three issues:


1. legislative bills amending the Cheaper Medicines Law (RA 9502) by creating a drug price regulations board,
2. update on the bill raising the excise tax on tobacco and alcohol products ("sin tax bill"),
3. discussions on the proposed Milk Code, other matters. 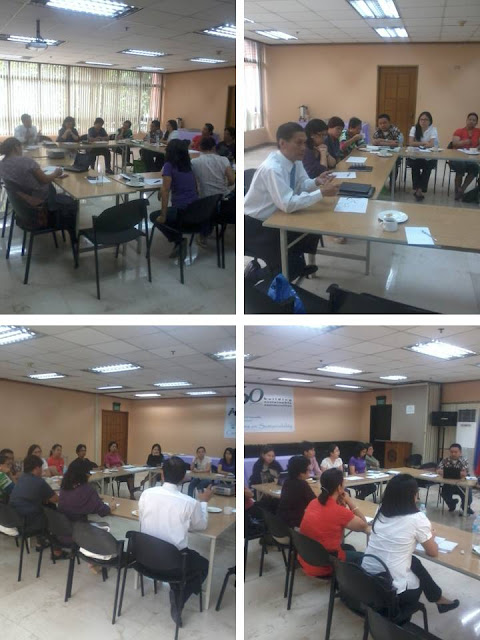 The meeting was moderated by Atty. Pau Tanquieng of the Ayos na Gamot sa Abot Kayang Presyo (AGAP), the biggest coalition within CHAT. She also presented the three bills creating the drug price regulations board, as well as Sen. Legarda's peculiar bill amending the amendments to the Intellectual Property Code (IPC) contained in RA 9502.

None said Yes, meaning everyone who attended the meeting, including CHAT President, Gov. Obet Pagdanganan has NO as answer to the above questions by Pau. Since she has already written the AGAP position on the same subject, she begged off to write the draft position paper of CHAT. No one else volunteered to do it, so I did. Here's the draft that I wrote, posted in our googlegroups last July 03, 2012.
------------

On the Proposed Amendments to the Cheaper Medicines Law

The Cheaper Medicines Law of 2008 or RA 9502 is still a new law and there are several indicators that so far, it has succeeded not only in bringing down medicine prices but also in making more essential drugs become more available in more drug outlets nationwide. There are other provisions of the law that are not activated yet and which, when seriously implemented, will further bring down drug prices, The main challenge therefore, for the implementing agencies and various stakeholders in the Philippine healthcare sector, is how to carefully implement those provisions.

There are several bills in both the House of Representatives and the Senate though, that aim to amend certain sections of RA 9502, foremost of which is the creation of a new agency, the Drug Price Regulations (or Regulatory) Board (DPRB). These are HB 1386 by Cong. Ferjenel Biron, and SB 5 by Sen. Loren Legarda and SB 2960 by Sen. Manny Villar.

We believe that the proposed amendments of (a) expanding the drug price control policy made in August 2009, and (b) creating a new office or bureaucracy that will implement such expanded policy, are not necessary at the moment for the following reasons.

One, even before the drug price control policy was made in August 2009, average prices of essential medicines have been declining due to more competition among various drug manufacturers and among more drugstores and pharmacies.

Two, the policy benefited the rich and upper middle class patients who would be buying those branded innovator drugs whether their original price was retained or was slashed by half. Many of the 21 drug molecules that were covered by the policy have cheaper, off-patent competing drugs already available. The poor were patronizing the off-patent drugs which are still cheaper than branded innovator drugs even if their prices were slashed by half.

Three, the policy has contradicted the goals the Generics Act of 1988 or RA 6675. That law was successful in promoting cheaper generics, off-patent drugs to the public. The drug price control policy however, encouraged the people to shift back to the branded innovator drugs made by multinational pharmaceutical companies as their prices were made 50 percent cheaper.

Four, the policy has adversely affected many local generic manufacturers, some of which were forced to close, or pull out some of their drugs since their prices were already low enough. After the mandatory 50 percent price cut by the innovator drugs, they were forced to either make further price cuts which affected their profitability, or simply close shop even temporarily.

As a result, the policy has introduced business uncertainty especially among local generic drug manufacturers. The threat of being forced out of the market by the unfair price competition by the foreign pharmaceutical companies due to drug price control will remain.

Five, creating the DPRB will only add another layer of bureaucracy in the government, which will require another set of budgetary allocation each year. Right now, the DOH Advisory Council on RA 9502 is doing fine monitoring the implementation of the law including the drug price regulation or control policy.

Six, there is a danger that corrupt government officials who will head that board might use their powers to extort money from existing players, otherwise their profitable drug products will be put under price regulation list.

In lieu of those twin moves, we propose the following.

One, further monitor and assess if the drug price control policy made nearly three years ago has indeed benefited the poor or not, and whether the policy should be retained or be recalled.

Two, we focus our energy and resources on how to attain universal healthcare (UHC), how to give the really poor sectors of Philippine society to have access to both preventive and curative healthcare.

Three, government should encourage the production and marketing of medicines and treatment against certain tropical and infectious diseases. These include certain herbal medicines that comply with the minimum requirements of the certificate of Good Manufacturing Practices (cGMP), as well as passing the bioequivalence tests by the government.

And four, further to Sen. Legarda’s bill, we believe that provisions that amended the Intellectual Property Code (IPC) that allow the government to issue special compulsory licensing or parallel importation of certain essential medicines should be retained, not removed or repealed.

Attaining UHC, making physician consultations and some diagnostic tests become cheaper if not free for the really poor households, is a more useful and noble action than drug price regulation.
----------

For sure the above draft will undergo various revisions. I just posted it so that when the final draft is made, I can compare it with the original draft.

Meanwhile, here are two charts showing declining drug prices even before the price control policy was made in mid-August 2009. 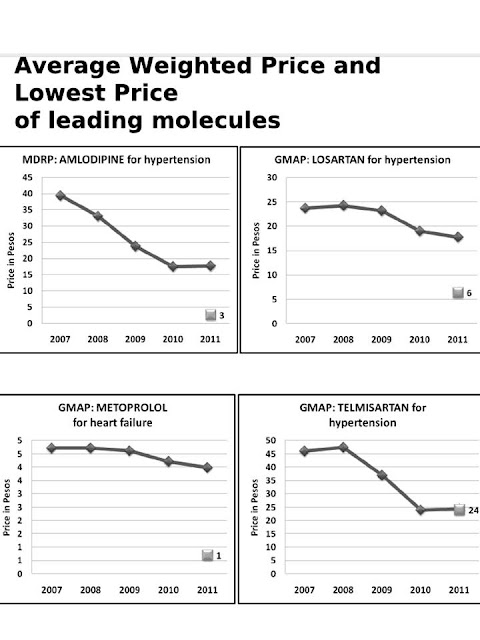 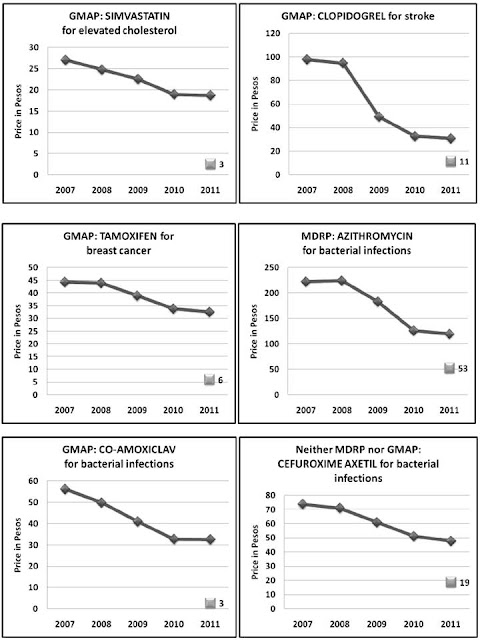