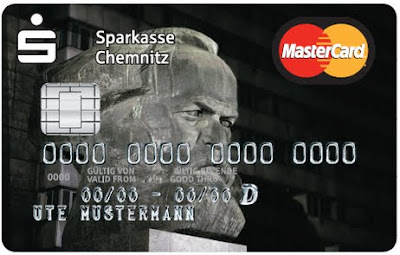 Last Tuesday, I posted this link and photo below, with this note:

The Karl Marx MasterCard Is Here. It Needs A Tagline.

The German bank Sparkasse Chemnitz recently launched a Karl Marx credit card. The bank let people vote online for 10 different images, and Marx was the "very clear winner," beating out a palace, a castle and a racetrack, among others. Reuters has moreon the story.

The comments from some of my facebook friends were wacky, below.
---------

Anne Leslie  This is so not Karl Marx! What happened to Dialectical materialism?

Nonoy Oplas Purchase by credit is dialectics while using the purchased commodity is materialism :-)

Joel  ‎"Social is as credit does. #marxcard You never know what you could live through." LOL

Jules You have nothing to lose but your consumption constraints. #marxcard @planetmoney

Nonoy Credit lovers of the world, unite! You have nothing to lose but your cash tomorrow.

Ernesto just appropriate for any socialist government surviving on credit.

Anne Leslie ironic! this is a good example how capitalists creatively commodify Karl Marx! I'd like to have one though! haha!

Nonoy  Socialism is good until you run out of other people's money.

Ernesto For sure all collection agents are barred when cardholders default. There is a Credit Clause: "We Simply Owe it to Ourselves."

Nonoy  Abolish all private property. Expropriate the expropriators. Impoverish the rich banks, use the Marxcard.

Elizabeth Max out the Marxcard.

Nonoy  When you're financially red, that's what you need, Marxcard.
‎Das Kapital or short of kapital, you need the Marxcard.

Todd  You people laugh away but only 1000 rewards points and the Che shirt is mine! ;-)

Nonoy  Shopping on credit is the opium of the people. They need the Marxcard.

A spectre is haunting Europe -- the spectre of Marxcard proliferation.

Capital is dead labor which, vampire-like, lives only by sucking living labor. Marxcard will provide the standby battery should labor fights back.

The history of all previous societies has been the history of credit struggle. Marxcard would have solved such struggles.

The theory of communism may be summed up in one sentence: Abolish all cash and replace them with the Marxcard.

Let the ruling class tremble at a Marxcard revolution. Shoppers have nothing to lose but paper bills and loose chains.