* This is my article yesterday in TV5's news portal.
http://www.interaksyon.com/article/37648/fat-free-economics-coal-climate-and-government
-------- 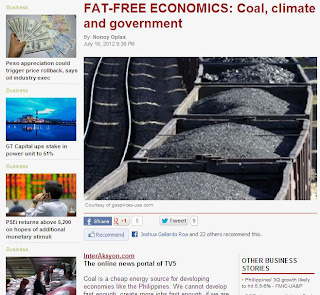 Coal is a cheap energy source for developing economies like the Philippines. We cannot develop fast enough, create more jobs fast enough, if we are groping in the dark with frequent power outages like what we experienced in the early 1990s. Or if a big portion of household and company expenditures are spent on high power rates.

During a Platts forum last week, one of the speakers, Ismael Ocampo of the Department of Energy, presented the following data:

Sources of power generation in the Philippines, percent of total.

This shift is also shown in the increase in local oil consumption, by a million metric tons per year on average. Both local production and importation were also rising.

What drives this rather fast shift to coal? A second speaker, Cecilia Quiambao who is associate editor of Platts for coal, provided some answers. She showed these charts:

Now is the time to further industrialize and modernize with declining global coal and other energy prices. This trend is supported by other developments, as Quiambao illustrated:

- US coal export capacity could reach 270 million MT in 2016, according to UBS. US coal producers can flood the international market once pricing becomes attractive to 270 million MT from the current 158 million MT, increasing the disruptive nature of US suppliers on the seaborne market.

- Korea South East Power received offers for at least 1.3 million MT of coal in its two recent spot tenders for a combined 260,000 MT.

Thus, supply is five times the amount demanded in the case of Kosep. It is a buyer’s market, thanks largely to the further development of shale gas in the US and other rich economies.

Coal is not an “evil” energy source that is said to contribute to “man-made warming” as portrayed by the UN, Al Gore and some environmental groups like Greenpeace and World Wildlife Fund. Climate change is mainly natural, warming-cooling-warming-cooling in multi-decadal cycles, regardless of how many billions or trillions of tons of coal is burned worldwide each year. So while global warming was true, global cooling was also true, and is happening now.

From January 2002 to May 2012, as CO2 kept rising to nearly 400 parts per million, global temperature was declining or cooling by 0.04 degrees centrigrade per decade. “Causality” between more CO2 and “more global warming” is not seen or happening. What we normally experience here in the Philippines and other countries in the tropics is more rain and more flooding, not less, little or no drought, not more. And these are indicators of cooling, not warming.

Recently, certain groups like the National Renewable Energy Board - a new bureaucracy created by the Renewable Energy Act of 2008 (Republic Act 9513) - are proposing to impose a carbon tax on non-renewable energy sources, like $1 per ton of imported coal. This is a rent-seeking move by the NREB and other lobbyists to demonize and make an affordable energy become more expensive. Renewables, like wind and solar power, will become “less costly” as they distort upward the prices of the non-renewables and impose an indirect tax to subsidize the renewables.

This indirect tax is called the feed in tariff scheme. Energy consumers - you and me - will pay FIT for the mandatory use of those expensive power sources. This will make our already high electricity bills more expensive. We have the highest electricity cost for industrial users in Asia: $0.18 per kilowatt-hour in 2010 as against $0.15 in Japan and Singapore, down to only $0.06 in Indonesia and Korea. Check out International Energy Agency, IMD World Competitiveness Online as well as Welfare Economics, Philippine Institutional Issues.

The role of government is to allow enterprises to seek cheaper and reliable power sources, and not play cronyism by taxing some power sources while subsidizing others. For now, coal will become cheaper as many industrialized economies shift to shale gas, and coal producers from those countries will sell lower to developing countries like the Philippines.

This is good news and will jibe with the high growth scenario of the government. Climate alarmism and renewable energy cronyism should not be allowed to distort this new development.
----------

but those industries are powered by coal right?

forget about climate change-- what about plain vanilla pollution? the same arguments apply.