Compared to last month or the last three months, the global traffic ranking of all major Philippine media outlets and porttals have increased. See below, via alexa.com, 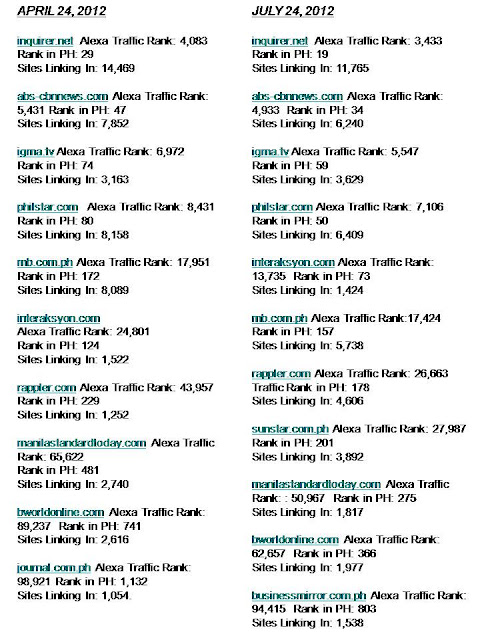 I did not notice sunstar.com.ph last month and earlier months, so I am including it only today. Here are the major gainers in global traffic ranking after three months:

I continue the monthly tracking of the top Philippine media portals and their positions in global internet traffic via alexa.com. I only track those with global rank of below 100,000. Here are their alexa traffic rank 3 months prior to dates indicated. 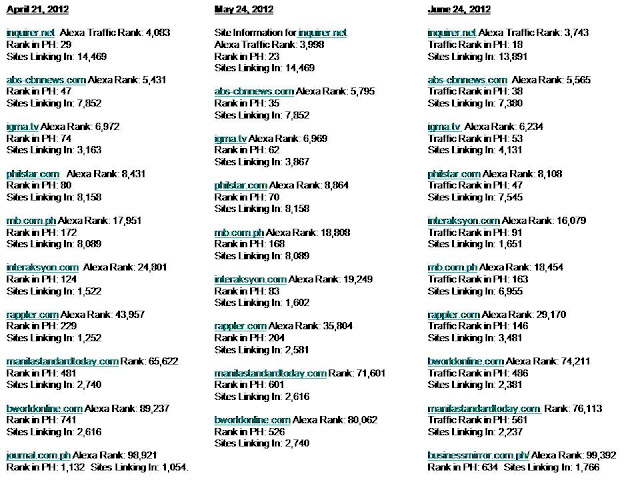 The losers in ranking were:

The consolation is that these two newspapers are still in the top 100,000, a feat that other broadsheets here and abroad can only dream and salivate.

Then I looked at four charts comparing the traffic rank trend of #2 to #5, I did not include the Inquirer as it looks as an "outlier" at the moment due to its very high rank. Below, traffic trend over the past six months, and past three months. See some interesting notes?

Starting from January 2012, #s 2 to 4, namely ABS-CBN, GMA and Philippine Star, actually suffered a decline in global ranking until early May this year. Then the big jump -- should be due to the latter part of the Corona impeachment trial at the Senate where some of the huge political drama and twists occurred. Interaksyon just maintained its upward trend since it came from a rather low base. 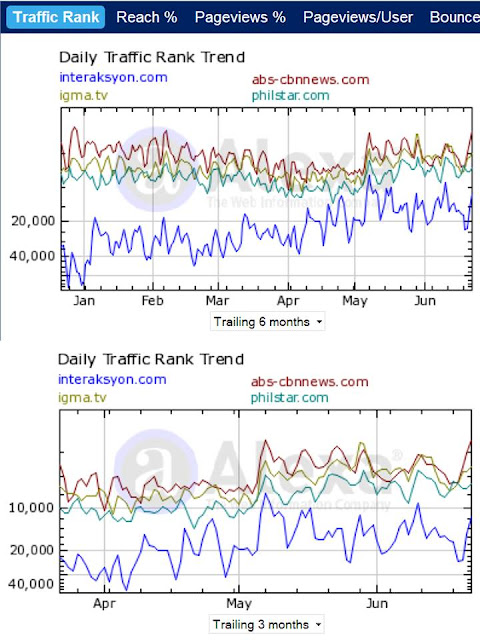 The charts for the past 30 days and past 7 days, below. Nothing so dramatic except the jump over the past four days or so. Could be the renewed tension between China and the Philippines over the Scarborough and West Philippine Sea? 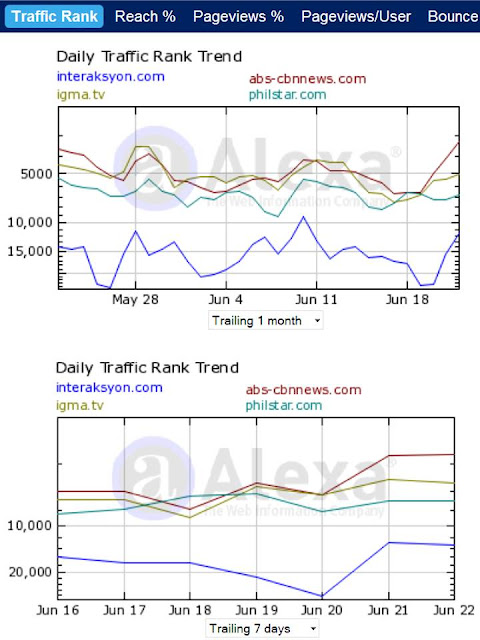 Ok, ok, so what have these media monitoring got to do with advancing individual liberty and personal responsibility, free market and free trade, rule of law and property rights, the main advocacies of this blog and Minimal Government Thinkers? Nothing much actually, except to show that stiff competition among news and public affairs portals, and the quick intrusion of online only, no hard copy portals like Interaksyon and Rappler, are kicking in hard. They affirm the values of freedom of expression and free market competition.

Readers can draw their own conclusions and insights based on the limited data presented above. Meanwhile, below are what I wrote last April and May on this subject.
--------

The world is indeed getting more dynamic somewhere. In the case of Philippine media, things are improving rapidly for some in terms of their popularity, deteriorating for others, while a few have remained stationary, even temporarily. See this table, global ranking over the past three months of big Philippine media via alexa.com. First column is for April 24, 2012, second column as of today, May 24, 2012. 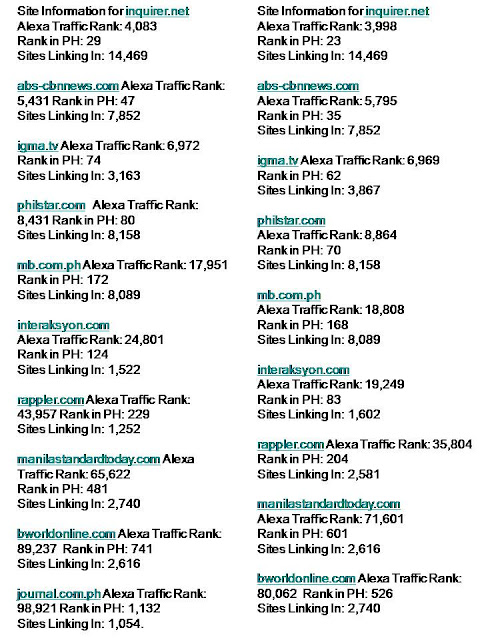 Interaksyon.com is slowly moving towards the top 10,000 rank. If current trends will continue, it might reach this ranking within four months, sometime in September this year. 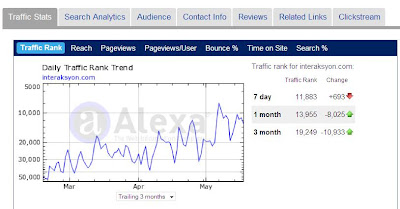 I compared the traffic ranking over the past three months of ABS-CBN, GMA, Philippine Star and Interaksyon and here's an interesting graph. 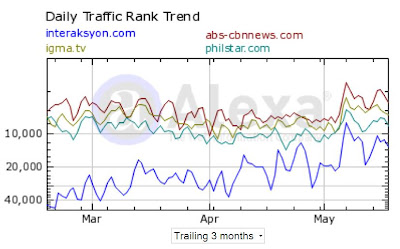 It is obvious that Chief Justice Corona's impeachment trial has contributed significantly to the global traffic rank of Philippine media, especially the above-mentioned ones.

Meanwhile, congratulations once again to Interaksyon and Rappler. You are sizzling hot. Whatever it is that you are doing, sustain them.
----------

Last night, I checked the global ranking via alexa.com of the biggest media outlets in the Philippines. I wanted to see how interaksyon.com, TV5's news portal, is positioned, that's why. And I'm interested to see because I write a weekly column there since last month. Here's what I got. I removed from the list those papers whose global rank is higher than 100,000, as of last night at least.

Interaksyon.com's 6th place rank, behind Philippine Star and Manila Bulletin, I think can be explained by the lower site links of the former, only 1,522 vs. 8,158 and 8,089 respectively of the latter. While actual online views of interaksyon.com is larger than these two broadsheet papers, alexa and other sites that make global ranking I think factor in the number of back links to the site.

I will try to make this "survey" again next month or two months after to see if there are any significant changes in global ranking.
Posted by Bienvenido Oplas Jr at 11:47 PM

Howdy, I believe your site might be having browser compatibility issues.
When I look at your website in Safari, it looks fine however when opening in I.
E., it has some overlapping issues. I just wanted to give you a
quick heads up! Other than that, excellent blog!
Also see my web page :: side effects of protein powder

Congratulation for the great post. Those who come to read your Information will find lots of helpful and informative tips. Alinta QLD