At times I get pissed off by those media releases by the world's top warming NGOs -- Oxfam, Greenpeace and the World Wildlife Fund (WWF). I have challenged their leaders in their Philippine offices to a public debate before, zero reply from them.

Do we hear them saying, "CO2 causes global warming, it also causes global cooling"?
Climate robbery is a bad habit that won't stop. Woe upon us, taxpayers and energy consumers.

So in one of my big discussion yahoogroups, I posted and threw this challenged:

To people from Oxfam, Greenpeace, World Wildlife Fund, other alarmist groups -- you know that what you are peddling is a scam, 100 percent lie.

Guys, forward this to your friends and acquaintances who are working for any of those warming-alarmist NGOs.

A Filipino friend and member of that discussion list,, Ahmed Mendoza, commented:

Noy, you wrote “You also know that you are ALL cowards to face a public debate on the science of man-made warming.” I remember a debate between you and a scientist (?) who accepted your challenge to talk about this climate change issue (or non issue). Did it push through or was there a chickening out in the last minute?

I hope someone from the multitude who turned off their lights for 60 minutes for Mother Earth and cling to this claim dogmatically will stand up to take on your challenge. If words like “cowards,” “face me in a public debate,” “100 percent lie,” and “big lie” won’t embolden them, I think their arguments really stand on shabby ground. 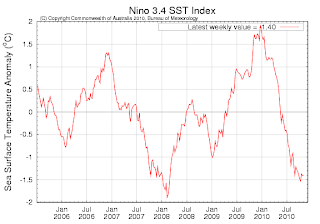 I thanked Ahmed. About the proposed debate between me and Dr. Joey Comiso, the only Filipino scientist in NASA, the organizers, a group of filipino Balik Scientist Program (BSP) under the DOST proposed it. Rither Joey or the organizers themselves chicken out.

Yes, I now use really strong words. They are ALL cowards, big scam, 100 percent lie, etc. to refer to man-made warming. Precisely to embolden them.

If someone tells me frontally that I'm a liar, a peddler of scam, etc., right there and then -- not a minute or an hour or a week from there -- I will confront that person.

See also the so-called "thousands of IPCC scientists" who produced the UN IPCC Assessment Reports 1 to 4. AR 4, the latest, was released Nov. 2007.

Heartland Institute has been organizing a big international conference on climate change (ICCC). The 1st ICCC was held in March 2008 in NYC, where the UN HQ is. Zero participant from any of those "thousands of IPCC scientists" even if the IPCC leadership were invited. The 2nd ICCC was held again in NYC, March 2009. Again, zero participants from IPCC.

The 3rd ICCC was held in Washington DC in June 2009, where the politicians who legislate carbon "cap and trade" and "clean energy" blah-blah bills are holding office, not a single shadow of the warming scientists. The 4th ICCC was held in Chicago last May 2010. Again, everyone from the warming camp were invited, Pachauri of IPCC, Al Gore, Jim Hansen of NASA, and for 4 straight occasions, zero attendance from the warmers.

How coward they can be? It's a big international conference with about 700 participants from many countries around the world, explicitly delivering papers that say that IPCC "analysis" and projections are a huge scam, and the IPCC cannot send 10 or 100 or 500 of their scientists to do battle with the "skeptical" scientists?

Where there is deafening silence, there is huge admission of guilt. 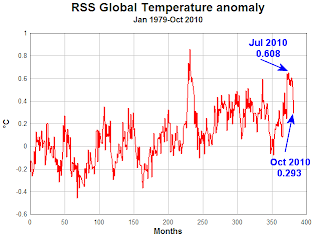 Here's the latest lower tropospheric temperature data from Remote Sensing System (RSS). The plunge in air temperature last month was so steep. Data is from
http://wattsupwiththat.com/2010/11/04/rss-global-temperature-anomaly-takes-a-dive/#more-27457

Please take note that the IPCC or the UN FCCC do not hold conferences where debates are accomodated. They only hold meetings to sing halleluiah to each other. And they hold really huge, expensive, global climate meetings, every 2 months on ave in Bonn, Germany or other big cities in the world. Last Dec. 2009, the COP 15 meeting attracted possibly 10,000+ climate bureaucrats, politicians, environmentalists, media, and other do-gooders in Copenhagen. Funny for them, they experienced blizzard for an event to "fight global warming".

In case there are any taker from any, yes, from anyone, from the warming camp -- please forward this challenge to your friends in WWF, Greenpeace, Oxfam, other environmentalist groups -- to face me in a debate. There are some opportunities. The Rotary Club of Makati Urdaneta will have me as their guest speaker on the subject of warming scam. I told the organizers to scout for anyone to debate with me. One projector for each of us, so we can show graph vs graph, data vs data. It will be on Nov. 24, noontime, I dont know the exact venue yet, should be in makati.
Posted by Bienvenido Oplas Jr at 10:25 AM

I suggest you target the very vocal, grassroots pro-warming radio commentators like those on Kalikasan Vigilante since they like to cite scientific studies. If you can convince them, they should be equally vocal in their support for the skeptics' side.

On an earlier post you claimed
"The existence of the medieval warm period (MWP), much warmer than past century's warming (roughly from 1850 to 1998) was written by several hundred peer-reviewed authors and articles"

On the first point there's a lot of uncertainty, but all global and hemispheric reconstructions show that the MWP was probably cooler than temperature in the past decade.

Certainly if we warm by 2C by 2100 we will be easily warmer than the MWP.

In order to get a true global or hemispheric picture the individual proxies need to be combined. That's what the global and hemispheric reconstructions have done.

You also stated that Mann's "hockey stick" wasn't in AR4, but it is:

Mann 1999 was the first reconstruction of northern hemisphere temperature going back to 1000AD and appeared in the TAR. It does have a MWP and LIA but the recent warming is significantly larger than that past variation.

Mann's reconstruction was groundbreaking in the sense that it demolished the prevailing dogma of a MWP much warmer than present. It was a stab at an answer from combining multiple proxies rather than a guess from a single location. Like all initial work it wasn't the final answer and subsequent reconstructions, including Mann's own (eg Mann 08), have refined the process. There is a larger MWP (or deeper LIA) in recent reconstructions than in MBH99, but it's nothing like the initial IPCC graph and doesn't support a MWP warmer than present (let alone one much warmer)

Thanks for the debate, Cthulhu. I did not show the MWP graph in my 3 papers, "climate stupidity". But I showed that MWP graph, the past 10,000 years actually, in another posting, http://funwithgovernment.blogspot.com/2010/08/climatism.html

The temp reconstruction was based on oxygen isotope analysis of ice cores in Greenland. And the most recent warming in the past century, peaked in 1998, then generally flattened this decade, showed a temp anomaly of only about 0.6 C or 1 F. So if we compare the recent warming with the MWP, the former was a mild one. The MWP explained why the Vikings were able to conquer the Greenland and stayed there for s few hundred years even without modern heating system. Many of the Vikings though, left or perished when the LIA set in.

Comparing the last, actual warming, with IPCC's projections of warming, is not useful. Projections are not evidence. They are mere guesses. And guesses are only as good as the validity of the assumptions considered.

Thus, your statement "all global and hemispheric reconstructions show that the MWP was probably cooler than temperature in the past decade" is not correct.

IPCC models only used anthropogenic factors. They did not include natural factors like volcanoes, water vapor, clouds, galactic cosmic rays, PDO and AMO, natural CO2 emission from human and animal kingdom breathing, and the values they assigned for solar forcing was very small.

Re Mann's "hockey stick" graph, thank you for pointing out that link. I missed it. But there's no MWP or LIA there. That's why it's called a "hockey stick" graph because Mann portrayed the past temperatures as generally flat, until the 1800s industrialization up to the present that temps rose.

There were other studies that showed MWP, in about 4 regions of China by Chinese scientists.

Meanwhile, you did not comment on the most recent global temp graphs I showed above. Current global cooling trend simply shows natural fluctuations of global temp and climate, up-down-up-down, even if human CO2 emission keeps rising constantly.

Oxygen isotope analysis of ice cores in Greenland is not a hemispheric reconstruction let alone a global one. It's only a proxy of temperature in greenland. It tells us nothing about temperature patterns in asia or central europe. Therefore it doesn't demonstrate the MWP period (and when is the MWP?) warmer than today over the entire NH or the globe.

ALso the variations in greenland, like any other specific region, are much larger than the world average, so cannot be compared to the recent global anomaly. The values need to be converted to NH anomaly or global anomaly in order to do that. They can't be left as "greenland temperature".

There were already humans living in Greenland before the Vikings arrived and after they left. I don't see why the Vikings would have been unable to survive in Greenland in it's current climate. But that's beside the point anyway - the issue is the entire NH not greenland.

Comparing the MWP with IPCC's projections of warming is useful because it shows that the expected warming is easily going to overshoot the MWP.

"your statement "all global and hemispheric reconstructions show that the MWP was probably cooler than temperature in the past decade" is not correct."

It is correct. None of these hemispheric or global reconstructions demonstrate a warmer MWP:
http://profmandia.wordpress.com/2010/10/15/shooting-the-messenger-with-blanks/

What other reconstructions are there?

"IPCC models only used anthropogenic factors. They did not include natural factors like volcanoes, water vapor, clouds, galactic cosmic rays, PDO and AMO, natural CO2 emission from human and animal kingdom breathing, and the values they assigned for solar forcing was very small."

They do include volcanoes, water vapor and clouds. They do include natural co2 emissions from human and animal kingdom breathing (which is carbon neutral anyway so doesn't contribute to any rise in co2). They don't include GCRs because there's no demonstrated physical mechanism. Climate models exhibit AMO and PDO like oscillations in their oceans. The values assigned for solar forcing are based on physics so are only low because that's what the physics shows.

"Meanwhile, you did not comment on the most recent global temp graphs I showed above. Current global cooling trend simply shows natural fluctuations of global temp and climate, up-down-up-down, even if human CO2 emission keeps rising constantly."

That's what I would expect. It's the same behavior that's been going on for the last century of global warming. Temperature fluctuates naturally around a mean. It's the mean that's increasing.

Re the MWP, I read this comment elsewhere:
"What you learn quite quickly when discussing with AGW believers is, that hundreds of local measurements from all over the globe will always be local. To show global warming on the other hand, some North American Bristlecone Pines or even one single tree in Siberia is more than sufficient to represent the global temperature."

And as far as warming, people need to be constantly reminded that we are only looking at tenths of a degree in changes, all within the range of natural variability.

Thanks sdcougar. The MWP is a very inconvenient truth for the peddlers of the AGW scam.

Cthulhu, I made a new blog entry, with 5 graphs to illustrate the points, "Climate stupidity, part 4". It would made additional counter-points to your comments above.