(Note: this is my article for thelobbyist.biz last Sunday, November 7)

Global cooling has deepened recently, with drastic drops in both global air: the temperature of the lower troposphere (TLT) and sea surface temperature (SST).

For almost four straight weeks now, we have been seeing cloudy sky with occasional rains here in Metro Manila and in many provinces around the country. My sister in our province in Negros Occidental informed me yesterday that flooding is getting more frequent in our barrio, about 75 feet above sea level, due to heavy rains. Short but heavy downpour.

Here is the SST anomaly (or deviation from the average temperature) as of November 4, 2010. Notice the blue color, meaning colder than normal, by about 1°C to 2°C, forming in north Pacific, equatorial Pacific, south Pacific, south Atlantic, and Antarctica. Source: http://www.osdpd.noaa.gov/data/sst/anomaly/anomnight.current.gif

In particular, notice the formation of colder than normal waters in South China Sea, the Yellow Sea and Sea of Japan. What PAGASA may call as the “tail of a cold front” in its daily advisory on its website could be referring to this growing area of colder than normal sea water north of the country. 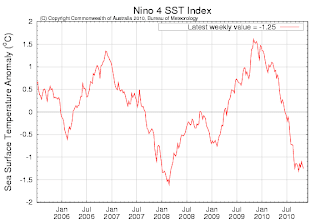 And here is the SST anomaly for Nino region 4 in the Pacific Ocean. Nino region 4 is the closest to East Asia. Nino region 3.4 is the biggest region in the center of equatorial Pacific. source: http://www.bom.gov.au/climate/enso/indices.shtml

As climate officials, bureaucrats, politicians, carbon traders and bankers, do-gooder environmentalists and other groups head to Cancun, Mexico for the UN FCCC’s COP 16 meeting, the reality of plunging global temperatures will haunt them as they try to convince themselves and the rest of the world that there is “unequivocal man-made warming and climate change.”

Let their illusion continue. But they should spare us, taxpayers and energy consumers, from their continuing illusion.
Posted by Bienvenido Oplas Jr at 10:03 AM