Yesterday, there was a big forum on the conditional cash transfer (CCT) for the poor, sponsored by the Department of Social Welfare and Development (DSWD) and the Asian Development Bank (ADB), at the UP School of Economics, Quezon City.

It was a big forum in the sense that many of the top guns of such program -- like the DSWD Secretary Dinky Soliman, NEDA Secretary Cayetano Paderanga, top officials of the ADB and WB, and "CCT expert" -- were there.

The forum was supposed to "foster public debate" but I think about 80 percent of the invited speakers were pro-CCT. Besides, the budget for 2011 has been approved in the House of Representatives already, along with the P21 B for the CCT alone.

The WB and ADB made huge lending for the program. Whcih means more public debt, more interest payment in the future. Borrow and borrow, the usual thinking of government bureaucrats and officials, upon the prodding of the foreign aid bureaucrats themselves, of course. 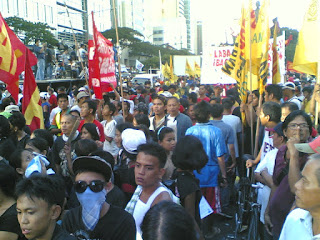 Isn't controlling, if not stopping debt addiction, also pro-poor? How about "stop debt addition for the poor"? Or this is imposible to happen? 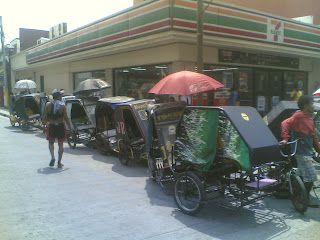 They always say, "save the poor" or "save the economy" or "save the planet". What they really mean is "save ourselves", them central planners and debt pushers. Most of them just live off on tax money, on money forcibly and coercively taken away from the pockets and savings of the productive sectors of society.
------

I never liked the idea of handing over money to the poor for nothing. I guess this is another Robin Hood-type scheme to rob from the taxpayers and give to the voters. I have been paying 12% VAT and almost 25%-35% in income taxes since graduating from college and I have no plans of shelling out more just to fund this program. (Any idea on when Philhealth will run out of funds?)

Why don't the government use this money as incentives to plant vegetables or various produce. If the NFA has funds to buy rice, why dont they try buying vegetables and fruits. Conditions of the CCT should include a provision for the beneficiaries to sell to the government a specified volume before receiving their "allowance" for the following month. There is technology available for planting vegetation without using soil. I also remember our science projects in gradeschool where we were able to grow plants from plastic bags, cotton, etc.

The CCT program is an incentive to become, want and to remain poor. This administration needs to create programs that would help the poor now but not through the CCT. There has to be another way. If they push through with this, I'll declare myself as poor, apply for the program and earn a living by joining the informal/underground sector where BIR have been unable to collect income taxes from.

Yes, endless subsidies always create moral hazards problem. Whatever program for the poor should be one-time and not forever. That way, the poor should work hard to get out of poverty because there are no more subsidies coming if they remain poor.

But the foreign aid establishment are hard-core debt pushers, not much different from drug pushers. Save the poor, save the planet, save whatever alibi, countries should keep borrowing from them. Governments do not default on debt payment, so they are assured of huge revenues out of the sweat and blood of the people.

The same UPSE yahoogroup member who made the comment said...

I guess if the aid is specific to fund the CCT program then government should have the good sense to decline and ask for a different aid or loan. By asking a less specific type of aid, the loan sharks still get to earn from our blood and sweat and present themselves as humanitarian at same time.

Aids should be geared more to fund education, with more emphasis on the primary and secondary education. UP, of course, and other state educational institutions deserve it but I am more inclined to support the improvement of gradeschoolers and highschool students. Anyway, you cannot go to UP if your foundation is not adequate.

Aids to improve infrastructure should also be taken rather than aids to finance the CCT. Better means to travel to and from a person's livelihood will have significant impact over that of merely giving alms. With that in mind, maybe the CCT fund allocated for Metro Manila will be put to better use through subsidizing the MRT and LRT? MWEs, Casuals and Contractuals will benefit with the stable price and will further benefit should wage boards grant future increases in minimum wage. Imagine working at higher wages with virtually the same cost associated to generate the said income (excluding, of course, changes in PUV fare increases and lunchbreak/merienda meals). It will have the trickle-down effect which these loans/aids present themselves to possess on paper.

I think that govt should shrink expenditures as the budget deficit every year remains high, and public debt is ever rising. Next year, interest payment alone for local and foreign debt is P357 billion. It's a big waste of resources, a big transfer of money from taxpayers, rich and poor alike, to rich bankers and bond holders.

Reducing expenditures, to have balance budget whenever possible as we reduce the public debt, is also pro-poor. Money that will be used to pay interest payment should be used instead to improve existing social programs.