Fiscal irresponsibility, like personal and corporate irresponsibility, is wrong. Governments and individuals should live within their means, whenever possible. When income and revenues are low, then expenditures should also be kept modest. When income and revenues increase, then it is desirable and understandable to also increase spending. But borrowings should be kept to the minimum, preferably on emergencies only. Debt addiction as a habitual policy should be avoided.

The Ireland government has finally accepted bail-out money from its European Union partners and the IMF, some $114 billion. There are strings attached, of course. Foremost of which are the huge cutback in spending, especially on its generous and expensive welfare system, cutting the number of government personnel, and the ugly task of increasing taxes.

Ireland is a small country, population only 4.5 million. But it is also among the world's richest countries in terms of per capita income, nearly $40,000 per person per year. Currently, it has a high unemployment rate of 13.4 percent of the active labor force. 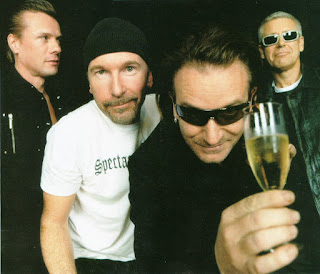 The country has produced some top notch rock stars like U2 and Bono. Bono figures prominently in "more foreign aid to developing world" and "Make poverty history" campaigns, via more taxes in rich countries and siphon off a part of it as foreign aid to the often corrupt governments of poor countries. But I digress.

So now, what are those spending cuts and where will be the new tax hikes? Here's portion of a report from the NYT, Ireland Unveils Plan to Secure Bailout

The austerity plan calls for cuts of nearly 15 percent in Ireland’s social welfare budget... saving $4 billion a year. Some 24,750 public jobs... would be eliminated, cutting state payrolls down to about what they were in 2005 and saving about $1.6 billion a year. Child benefits and other social welfare payments would be reduced, and the nation’s minimum wage, now 8.65 euros, or $11.59, an hour, would be cut by 1 euro, or about $1.34....

Ireland’s tax net would be widened to take in some low-income workers who currently pay no tax, and a series of new taxes would be imposed on certain residential properties, as well as on 120,000 people who receive public sector pensions.... cut spending on health care by over $1.9 billion through a series of measures that are likely to push up the cost of private health insurance.... education programs will nonetheless take a hit starting next year, as more than $66.7 million is cut from the four-year budget.

Prime Minister Brian Cowen outlined €10 billion in spending cuts and €5 billion of tax increases over four years to reduce a budget deficit that is expected to hit 32% of the country's gross domestic product this year—10 times the euro-zone limit...

Irish officials pledged to maintain the country's low 12.5% rate of corporate tax, a linchpin of Ireland's economy for decades. However, they said value-added tax would rise one percentage point to 22% in 2013, while some €2 billion would be raised by reducing tax breaks for pensioners and broadening the number of Irish who pay personal income taxes.

Ireland's Prime Minister Brian Cowen, middle, flanked by the country's Finance and Environment Ministers, will definitely feel the heat of public protests and opposition. Unless he promised to do the things that his government will do now during the election campaign.

To avoid such drastic measures of reducing welfare and increasing taxes, fiscal irresponsibility should be avoided in the first place. Don't promise or give too much welfare and subsidies as it will only encourage people to demand more welfare. Like government paying people generous allowances if they do not have work. People usually can fend for themselves if they just work and save for the rainy days. No need to run to the government to expect various subsidies.

After Greece just a few months ago, now Ireland. And tomorrow, Spain and Portugal. And after that, more European countries that already show cracks in their expensive welfare system by having public debts that are at least 80 percent of their GDP and running budget deficit every year.

More foreign aid, including climate aid, will definitely be affected too. Will Bono and Bob Geldoff launch another round of rock concerts to push for "more foreign aid"?
Posted by Bienvenido Oplas Jr at 9:56 AM