Here's continuation of my debate with a statist friend in one of my discussion yahoogroups. I answered some of his questions, below.

Market failure. It can happen anytime, anywhere, and can be created by anyone. I myself can create a market failure. I demand that a 200 GB usb flash disk should be made available in Philippine cyber shops and they should be sold for only P5,000. There is demand, but where is the supply? Zero. If someone is capable of bringing such usb in the local market, most likely it will be sold at P20,000 or more, not the P5,000 that I want. Demand exists, supply is absent, market failure, simple. 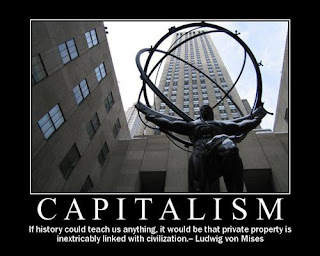 Where's the "market solution"? Just wait, maybe in 5 years or so. Competition among IT companies will make sure that such usb will be made available in the future at such price, or even lower. A statist though, would demand government intervention for such market failure. Then what, tax-tax-tax so that govt can subsidize the production of such usb and sold at a price demanded by certain consumers? What a lousy proposal.

2. Why some of us go to the extent of name-calling people who do not support free market policies as “statists”.

--> While I already apologized to some people for labelling them as "socialists", I will retain using the term "statist" because it's the most appropriate, 100 percent precise, term to describe their thinking. More state, more govt intervention and taxation, statist.

3. Sweeping resistance or sweeping reforms? what is necessary are sweeping reforms, starting with a tax on “hot money.” A mere two percent (2%) tax rate alone, for instance, on the current P5.5 Billion Value daily turnover could raise about P110 M a day...

--> A proposed 2% tax on hot money is "sweeping reforms" already? Why not propose 20% tax, or 100% tax? That's sweeping. Resistance to even 2% or even 1% additional tax, on top of already existing taxes, is based on my above questions, that if some people will think big and decide to issue an IPO for their companies too, why bring in the state to introduce price distortion? If no one buys their IPO, is it your or DOF problem? If many people buy their IPO, is it your or DOF problem? You are not part of it, unless you are one of the investors. It's a private contract between a private company and private buyers of the IPO.

4. "Collapsing physical economy" due to traders and middlemen who earn big bucks and leaving the farmers poor, another example of free market as a failure.

--> If the traders' profit margin is too high, that means that are too many agri producers and too few traders. So the market solution is to allow more traders, let them compete among themselves in bidding up the price for agri products.

Why is talk cheap? Because supply is always larger than the demand. Why are some consultants' professional fee expensive? Because their supply of really theoretical and quantitative studies is small relative to demand. That's free market.

On another note, we harvested mangos last April. We borrowed a small truck to transport some 50 "kaing" (about 20 kilos each) of mangos. We finished harvesting around 6pm. Dinner and rest for the driver and 2 aides. I took the bus as the small truck can only accommodate 3 passengers including the driver. They travelled back to Manila at 9pm.

Already in Metro Manila, around 1am, they were stopped at a police check point in Quezon City. The policemen asked what are being transported, they saw the mangos. Then they said there's a violation, that the truck should have an official notice on its body that it is a "fruit dealer" truck. These policemen are of course on some petty extortion rackets. The driver haggled for only P100, the cops said it's too small, they ended up at P200, then allowed the truck to move along.

Lesson? Traders are limited because of some idiotic government or police regulations, not because of free market. 50 kaing (at 20 kilos each, only 1 ton) is too small to hire a 6-wheeler truck and the rental cost will be big, which means the net profit for transporting the mangos will become small.
Posted by Bienvenido Oplas Jr at 5:02 PM