BWorld 37, World rule of law index and the Philippines

Among the gut issues that directly affect the ordinary people in many countries in the world is the peace and order situation, their freedom from criminality and terrorism, freedom from thieves, abductors and murderers.

In the Philippines, this situation is graphically represented by a huge number of private security guards almost everywhere: in schools and universities, office buildings and residential villages, malls and shops, banks and factories, airports and seaports, farms and resorts, and many other places.

This situation implies that people distrust the police, army, and other government enforcement agencies in protecting them and their private property. The peace and order function of the state has been greatly privatized a long time ago, despite the continued presence of huge and heavily-armed government armed forces and police.

Besides the huge number of private and armed security personnel, what are the other indicators that peace and order situation in the Philippines need major improvement?

The World Justice Project (WJP) has the answer in its annual Rule of Law Index.

Covering 102 countries, the Rule of Law (RoL) Index 2015 Report has used over 100,000 household and 2,400 expert surveys to measure how the RoL is experienced in practical, everyday situations by ordinary people around the world.

RoL is based and defined by the WJP on four universal principles:

1. The government and its officials and agents as well as individuals and private entities are accountable under the law.

2. The laws are clear, publicized, stable, and just; are applied evenly; and protect fundamental rights, including the security of persons and property.

3. The process by which the laws are enacted, administered, and enforced is accessible, fair, and efficient.

4. Justice is delivered timely by competent, ethical, and independent representatives and neutrals who are of sufficient number, have adequate resources, and reflect the make up of the communities they serve.

Eight factors were considered in constructing the RoL index:

For the specific purpose of this paper, only the components of Factors #5 and #8 will be shown. The country codes below represent the following: Singapore, Malaysia, Philippines, Indonesia, Thailand, Vietnam, Cambodia; South Korea, Japan, Hong Kong, China. (See Table) 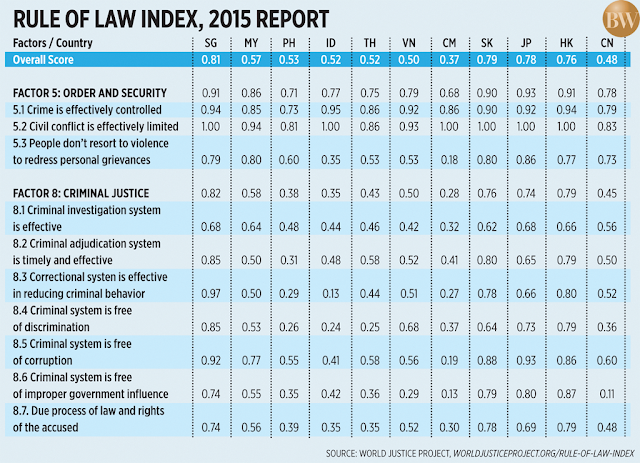 The Philippines ranked good in Factor #5, along with other Asian countries mentioned above. Perhaps the presence of so many private security agencies has contributed to the overall improvement in order and security.

The country though scored low in Factor #8 where the government’s justice, police and correctional agencies are directly involved.

Presidential, congressional, and local candidates, as well as their political parties and officials, should make it a priority to improve the country’s criminal justice system. An improvement in this area should mean higher confidence and respect of government and its various institutions.

A poor household may get free education, free health care,, a monthly cash transfer from the government and other subsidy programs. But of what use are these welfare programs if the same household would have one or more family members abducted, raped, or even murdered? Or the small parcel of land it has inherited or acquired after years of savings was grabbed by some influential individuals and families?

Here’s to hoping that the security and order, the criminal justice system of the country will greatly improved in the years to come.