So it is not prohibition on joining the TPP itself, but the TPP provides for goods and services liberalization among member countries. So Filipino multinationals like Jollibee, SM, San Miguel, etc. can easily enter the other TPP member countries but those countries' companies cannot easily enter here.

The implication is that we must amend our constitution to remove the restrictions on foreign investments, the restrictions in the practice of profession. Filipino doctors can practice in the US, Canada, UK, etc., but foreign doctors cannot practice here. Filipino consumers and the public in general are deprived of more choices, more freedom, because of trade protectionism imposed by governments.

Meanwhile, I am reposting this well-written piece by a good friend, on Malaysia being a part of the TPP. The photo I got from the web and just added here, not part of the original article.
------------ 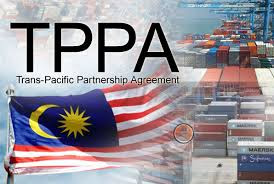 As we get closer to the parliamentary Trans Pacific Partnership Agreement (TPPA) debate next week, the anti-liberalisation campaigners have upped their ante to oppose the mega trade deal.

I disagree with their anti-liberalisation views but I admire their tenacity to mobilise a vocal campaign. The movement is spearheaded by Bantah TPPA. It is fascinating to watch how they work. They have been so efficient to the extent that many look at them for objective views.

But they are far from objective. Their sole purpose of existence is to oppose the TPPA and they will be silent on anything good. By being persistently vocal and by starting their campaign early they created the false impression that they are objective observers. Today they have a created a groundswell and you can expect politicians to follow their lead.

When Bantah TPPA started their campaign in 2013, I almost signed up too. As an advocate of unilateral liberalisation, I am ideologically driven to oppose the bilateral and multilateral nature of free trade agreements (FTAs).

I prefer unilateral liberalisation because it allows you drive your own reform agenda. The multilateral nature of the TPPA, just like all other FTAs, dilutes the impacts you can gain from liberalisation.

There is even the risk that it will create a new bloc that makes it difficult for member countries to trade with non-members. That is what happened to the EU today.

But colleagues at work reminded me that as researchers we must focus on facts. We cannot operate like ideological activists who announced two years before even seeing the real TPPA text that they oppose it. I have written before that that is a sign you are driven by blind ideology and not facts.

One of the critics of the TPPA is DAP MP Charles Santiago. He believes that the TPPA’s provision for stronger protection of intellectual property rights will increase the price of medicine. Recently he said that after Jordan signed an FTA with the US in 2000, price of medicine there went up by 20 percent and the generic drug industry was wiped out.

He is being selective. Since signing the FTA, there had been 78 new innovative product launches in Jordan, more than doubling the rate of launches of innovative drugs, thereby helping to facilitate Jordanian consumers’ access to medicines. Plus local Jordanian companies like Jordan Pharmaceutical Manufacturing Company and Triumpharma actually had more new products under the FTA.

Globally respected Malaysian economist Dr Jomo Kwame Sundaram has joined the bandwagon. Last week he said “"Why is Thailand is not interested? Why is the Philippines, which is very close to the US, not interested? Are there are so many benefits that the Philippines and Thailand can't see?"
Jomo is misleading the public if he were to imply that these two countries do not want to be in the TPPA.

On 27 November 2015, Thailand Deputy Prime Minister and economic tsar Somkid Jatusripitak said "Thailand is highly interested in joining TPP … Chances are high that Thailand will seek to join TPP."
And back on 25 June 2015 Philippine trade secretary Gregory Domingo said “I want to state clearly and irrevocably that we want to join TPP.”

Jomo made a more substantial comment when he criticised the computable general equilibrium (CGE) model that has been used by several researchers to project the benefits of the TPPA. He prefers another model - the UN Global Policy Model (GPM) – because according to him it offers more realistic macroeconomic projections, and it considers changes in employment and inequality and their impacts on economic growth.

What Jomo is doing here is taking the debate to a most academic level by challenging the models and assumptions used by other researchers, in order to elevate his own preferred model. If we were to use Jomo’s approach, then anyone with some knowledge of economic modeling could also argue that Jomo’s GPM is flawed too.

The GPM is a macro model that does not include information at the sector level and it does not include data on tariffs. It assumes that international trade is only good if exports expand more than imports, which is of course a flawed assumption because in reality both imports and exports are good.

If I want to sound cleverer than most I would add that the GPM is further weakened because it cannot calculate the tariff equivalent of a reduction in trade costs and its impact on international trade.

But that is just a tactic to confuse the lay public rather than help in the discussion. When it comes to economic modelling, every researcher has too make assumptions and choose a model. Many researchers, including those at the UN, use the CGE model that Jomo dislikes. In this case Jomo chooses one model and it allows him to highlight the points he wants to highlight.

I am sure more critics will appear as we get closer to the parliamentary vote. I wouldn’t be surprised if our GLCs start opposing too. For example, the majority of Khazanah’s investments are in companies domiciled in Malaysia. They have reasons to oppose the TPPA because it increases the risks for their investments.

But for us common people, our parameters are quite straightforward. The TPPA will enable cheaper products of higher quality to enter the market. As businesses are forced to compete, we will have more choice. If we stop looking at the vested interests and business owners, and start focusing on common consumers like you and me, it is clear that the government is right is wanting to sign the TPPA.

Do we want to protect the vested interests who are worried about competition, or do we want to champion the welfare of poorer consumers who are struggling to cope with the rising cost of living?
-----------

but what is the prevailing consensus of the large monopolies and oligopolies (Sy,Ayala,Gokongwei,MVP,Lopez,Tan,Aboitiz etc.)in the Philippines? are they echoing the liberalization rhetoric as well? hmmmmm i doubt it

Hi, good question. I think that for companies and industries that are already exposed to competition like power/electricity generation but not electricity distribution, they will be open to investments and services liberalization in the PH. Companies and industries that remain protected from foreign competition, they will be silently opposing such liberalization.