The Institute for Democracy and Economic Affairs (IDEAS) released a new 12-pages report urging the Malaysian Parliament and the public to support and sign the Trans­ Pacific Partnership Agreement (TPPA). Good call. Why? Economic and governance considerations. 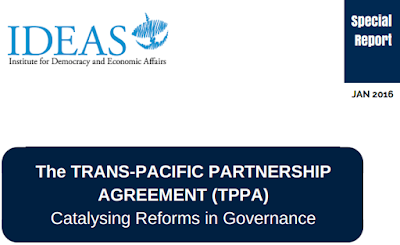 1. The TPPA will bring economic benefits and serve Malaysia’s best interests as shown by the two studies commissioned by MITI, one of which estimates Malaysian gross domestic product (GDP) gains of USD23­27 billion in 2027 in a baseline scenario, an increase in economic activity which will sustain 1­2 million new jobs by 2027. Most recently, a World Bank study predicted that Malaysia’s economy would swell by 8% and exports would rise by 20% as a result of the agreement, with Malaysian exporters having an advantage over regional competitors not part of the bloc.

2. The TPPA will improve governance problems, in particular:

The paper starts with explaining the importance of economic freedom and how the TPPA will help improve it. Then it discussed those four points above to improve governance system of MY. The conclusion is pragmatic in saying that

While the TPPA may not be an ideal agreement, the socio­political benefits outweigh the shortcomings. The agreement is a step in the right direction in terms of economic and socio­political reform and to jump­start the currently stalled reform in the country.

It is in Malaysia’s best interest to sign and ratify the TPPA. If it fails to do so, we will miss a valuable opportunity to incorporate greater transparency and good governance measures into our political and economic systems.