BWorld 36, What if the Philippines splits into many new island-countries?

This piece will attempt to provide an outlook for the Philippines many decades from now, a view different from articles and analyses seeking to explain what happened during the previous year and what to expect for the next.

In particular, this will be an outlook of the Philippines if it splits up into many new, small island countries.

There are two reasons for considering this view, however unthinkable it may be for some.

First point: There are dozens of other small countries with very small populations and small land areas yet they continue to exist as a country, and even become prosperous and wealthy. (See Table) 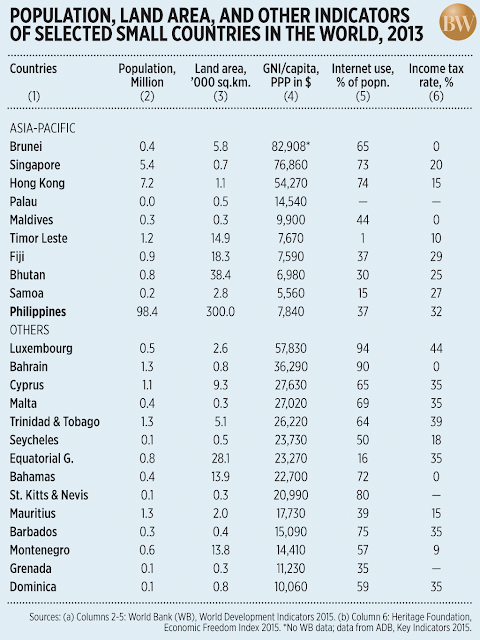 Second point: After traveling over land and sea for the past two weeks in several provinces and islands outside Luzon -- Oriental Mindoro, Panay Island (Aklan, Capiz, Iloilo, Antique provinces), Guimaras, and Negros Occidental -- I have come to realize that their growth potentials could be unleashed by they are allowed to set their own “national” policies -- from international trade and taxes to local programs and subsidies.

In the table, columns 2 and 3 show how some countries -- despite the small size of their land areas and populations -- persist, and even thrive, as nation-states, thanks to their own airports, seaports, education and health care facilities.

Columns 4 and 5 show their level of economic wealth and Internet connectivity. These are among the indicators of their prosperity despite their size. Column 6 shows the wide variety or divergence of income tax policy. At least four of these small countries have zero income tax while some have rates ranging from 39% to 44%.

Consider these four Asian economies: Hong Kong, Singapore, Brunei and Bhutan. Despite their small land area and population, they have food security, fiscal and energy sustainability, dependable infrastructure, and high Internet connectivity. They can manage on their own.

Why can’t the Philippines’ individual islands do the same?

Hong Kong will not be as dynamic and rich if it was just one of the many provinces of China. British colonialism has diversified and isolated it from the bureaucratism of China, before and after the communist takeover in 1949. Hong Kong for instance, could set a low income tax of only 17% vs. China’s 45%.

Singapore will not be as dynamic and rich if it was just one of the many states of Malaysia. Singapore opted for secession, not federalism. Singapore could set its own lower income tax of only 20% vs. Malaysia’s 26%.

Brunei too, would not have become as dynamic in energy development if it was just one of the many states of Malaysia or Indonesia. It is too far from Kuala Lumpur or Jakarta, and getting exploration and development permits alone from these national capitals would already be a bureaucratic headache. Brunei also has an income tax of zero vs. Malaysia’s 26% or Indonesia’s 30%.

Bhutan has its unique geography and cultural life that allows it to slowly prosper. It set its own income tax of 25% vs India’s 31%.

The economic potentials of current Philippine provinces and islands will be larger if their political and business leaders are given the chance to act as national leaders, not as provincial leaders beholden to the high officials and policies of the national or central government in Metro Manila.

A break up into many small countries does not mean animosity among them. Singapore’s secession from Malaysia did not result in any armed confrontation between them. Trade and freer mobility of goods and people/services has cemented friendship and long-term economic partnership between them.

There are many avenues for inter-country cooperation within the region. Like the Association of Southeast Asian Nations (ASEAN), the ASEAN Economic Community, Regional Comprehensive Economic Partnership, Asia-Pacific Economic Cooperation, World Trade Organization, membership at the Asian Development Bank (ADB) and World Bank, and so on. Presidents, Prime Ministers, Cabinet Secretaries or Ministers regularly see each other, several times a year.

With the continued expansion of the Philippine government especially at the national or central agencies, there is little chance that it will agree to a significant income tax cut, or reduction of various taxes, fees, royalties, penalties and mandatory contributions.

On the contrary, it will only be thinking of ways to retain those multiple taxes, if not raise them further. The “fiscal tragedy of the commons” can only worsen in the coming years, not reduce or lessen.

One way to break this tragedy is to create economic competition among many countries, or, in this case, islands.

The perspective of having new, many small countries out of the Philippines’ many islands and provinces, is not short-term; it is long-term. Its viability or nonviability should be explored by local scholars and actors from various sectors of the country. It is a good way to start the new year.

Bienvenido S. Oplas, Jr. is the head of Minimal Government Thinkers, and a Fellow of the South East Asia Network for Development (SEANET).
-------------