I have met this man twice in 2010, in Chicago and Sydney, both for an international climate conference. In Chicago, I just listened to him during a coffee break. In Sydney, I told him that I'm a good friend of Willie Soon, Bob replied, "Ahh, all friends of Willie are also my friends" and gave me a firm handshake and a nice smile. Very friendly, warm and intelligent. Sad to hear this. RIP, Bob.

Some reports today:
"Professor Bob Carter (74) has been a key figure in the Global Warming debate, doing exactly what good professors ought to do — challenging paradigms, speaking internationally, writing books, newspaper articles, and being invited to give special briefings with Ministers in Parliament. He started work at James Cook University in 1981, served as Head of the Geology Department until 1998, and sometime after that he retired. Since then he’d been an honorary Adjunct Professor.

He was a man who followed the scientific path, no matter where it took him, and even if it cost him, career-wise, every last bell and whistle that the industry of science bestowed, right down to his very email address. After decades of excellent work, he continued on as an emeritus professor, speaking out in a calm and good natured way against poor reasoning and bad science. But the high road is the hard road and the university management tired of dealing with the awkward questions and the flack that comes with speaking truths that upset the gravy train. First James Cook University (JCU) took away his office, then they took his title. In protest at that, another professor hired Bob immediately for an hour a week so Bob could continue supervising students and keep his library access. But that was blocked as well, even the library pass and his email account were taken away, though they cost the University almost nothing." http://joannenova.com.au/.../bob-carter-a-great-man-gone.../

(2) "This is almost unspeakably sad. Bob was the very embodiment of the “happy warrior” in the global warming debate. He was a scholar’s scholar, with impeccable credentials (including a Ph.D. from Cambridge), careful attention to detail, and a deep understanding of and commitment to the scientific method. He endured the slings and arrows of the anti-science Left with seeming ease and good humor and often warned against resorting to similar tactics to answer them." -- Joseph Bast, http://blog.heartland.org/2016/01/dr-robert-m-carter-r-i-p/

Dr. Carter served as Chair of the Earth Sciences Discipline Panel of the Australian Research Council, Chair of the national Marine Science and Technologies Committee, Director of the Australian Office of the Ocean Drilling Program, and Co-Chief Scientist on ODP Leg 181(Southwest Pacific Gateways)." https://www.heartland.org/robert-m-carter 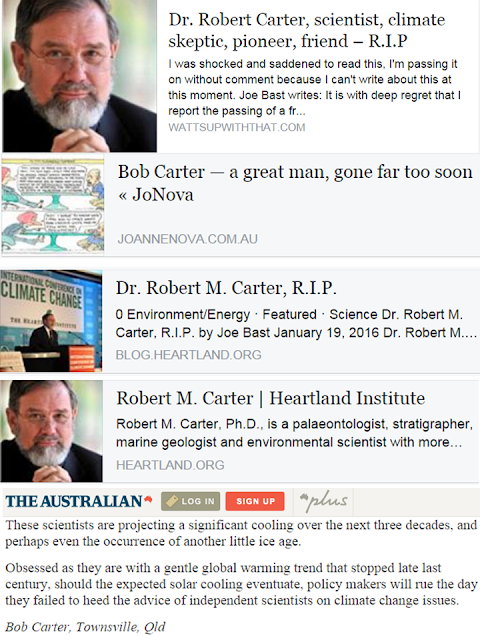 An old news report where Bob Carter argued for preparation  for global cooling.

"Is it unreasonable to be surprised that none of your writers, much less the government, has noticed that leading solar astrophysicists, such as Habibullo Abdussamatov from Pulkovo Observatory in St Petersburg, have for years been commenting on the declining activity of the sun?