Climate Tricks 50, Letter to the US HOR Committee on Science, Space and Technology

This week, a group of scientists, engineers, physicians, economists, mostly from the US but with other signatories from abroad, wrote the Chairman of the US' House Committee on Science, Space and Technology, about temperature data quality. Originally posted in WUWT, 300 Scientists Tell Chairman of the House ScienceCommittee: ‘we want NOAA to adhere to law of the Data Quality Act’.

Dear Chairman Smith,
We, the undersigned, scientists, engineers, economists and others, who have looked carefully into the effects of carbon dioxide released by human activities, wish to record our support for the efforts of the Committee on Science, Space and Technology to ensure that federal agencies complied with federal guidelines that implemented the Data Quality Act. This is an issue of international relevance because of the weight given to U.S. Government assessments during international negotiations such as the IPCC.
The Data Quality Act required government-wide guidelines to “ensure and maximize the quality, objectivity, utility, and integrity of information, including statistical information,” that was disseminated to the public. Individual agencies, such as the EPA, NOAA and many others were required to issue corresponding guidelines and set up mechanisms to allow affected parties to seek to correct information considered erroneous.
We remind you that controversy previously arose over EPA’s apparent failure to comply with these guidelines in connection with its Greenhouse Gas Endangerment Finding, which was the subject of a report by the EPA Office of the Inspector General in 2011, see http://www.epa.gov/sites/production/files/2015-10/documents/20110926-11-p-0702.pdf In that case, EPA failed to comply with peer review requirements for a “highly influential scientific assessment” and argued that the Greenhouse Gas Endangerment Finding was not a “highly influential” scientific assessment. If it wasn’t, then it’s hard to imagine what would be. (For a contemporary discussion of the EPA’s stance see
http://climateaudit.org/2011/10/04/epa-the-endangerment-finding-was-not-a-highly-influentialscientific-
assessment/ ).
In our opinion, in respect to Karl et al. 2015 and related documents, NOAA has failed to observe the OMB (and its own) guidelines, established in relation to the Data Quality Act, for peer review of “influential scientific information” and “highly influential scientific assessments.”
We urge you to focus on these important compliance issues. For your consideration we attach a draft letter which directly connects these issues to your committee’s prior request for documents.
Sincerely,
(List of signatories and tag lines)
The list of signatories is 18 pages long, see here.
I am one of the signatories, on page 14. I was invited by a good friend in the US, Dr. Willie Soon, an astrophysicist. It seems that I am the only signatory from South East Asia. 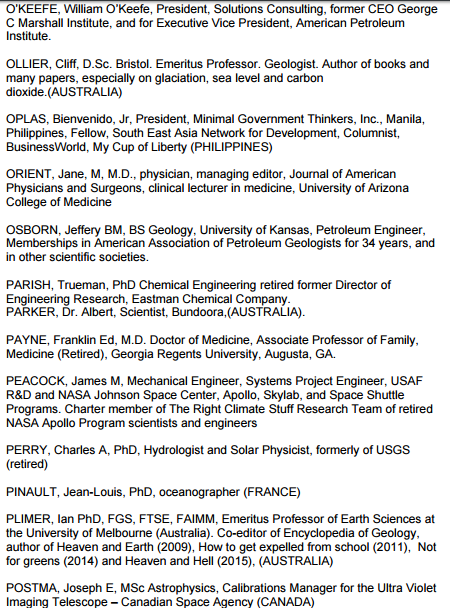