This afternoon, I spoke at Adamson University on a big college conference, held at the university's theater, probably about 200-300 students in the audience. I am thankful to Ms. Pauline Brillantes, a young faculty member at the Department of Social Sciences, for inviting me to their big college event. 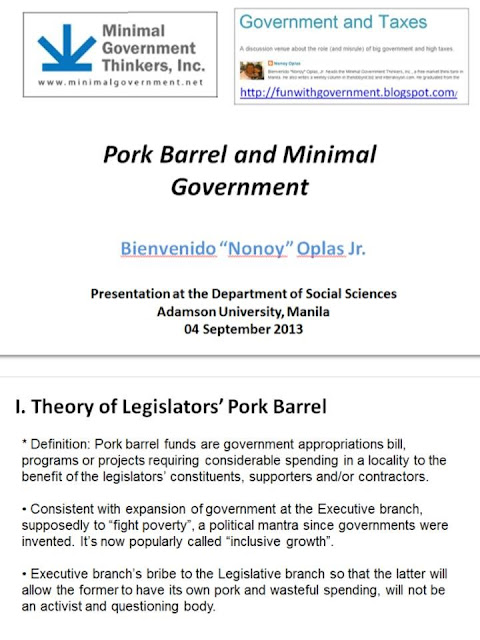 Since the audience are university students, I could introduce some basic conceptual framework and they would be able to follow. My presentation was 21 slides long, showing 16 of them here. The full presentation is at slideshare, here. 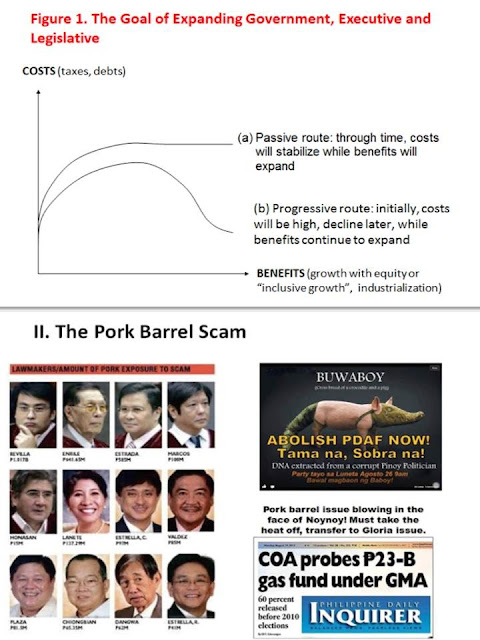 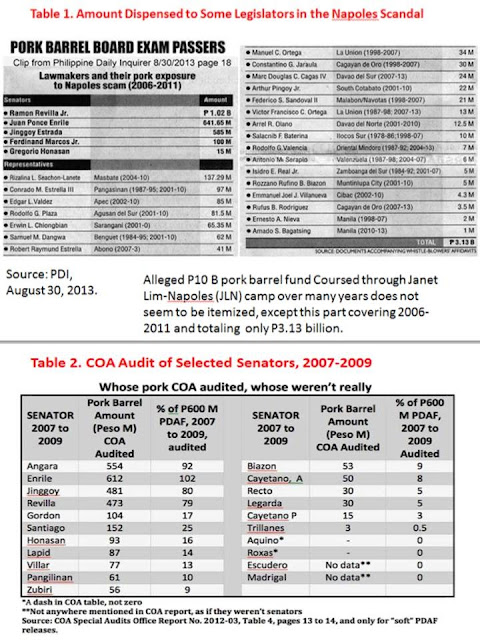 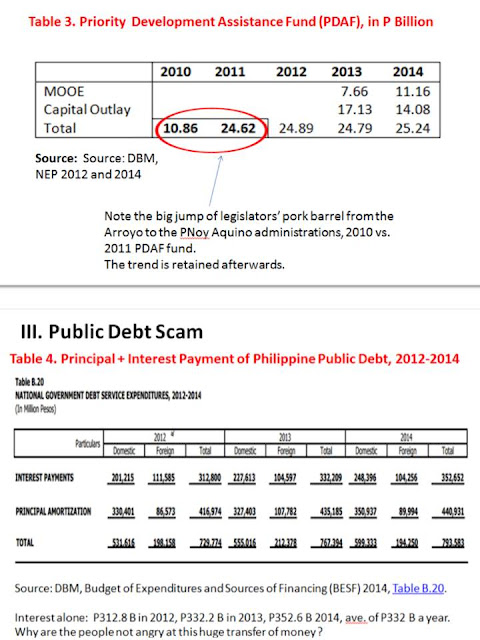 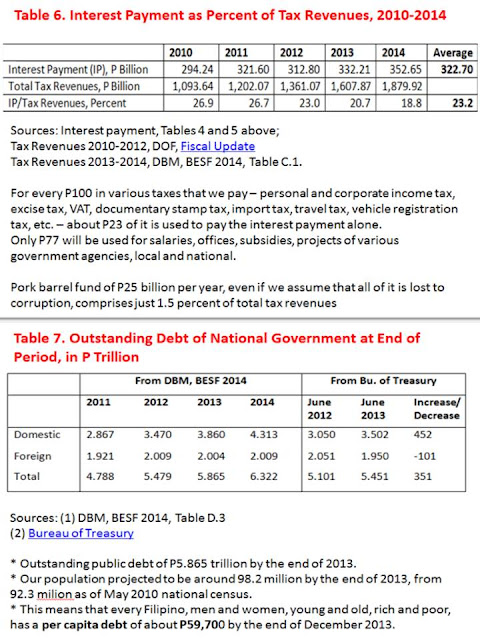 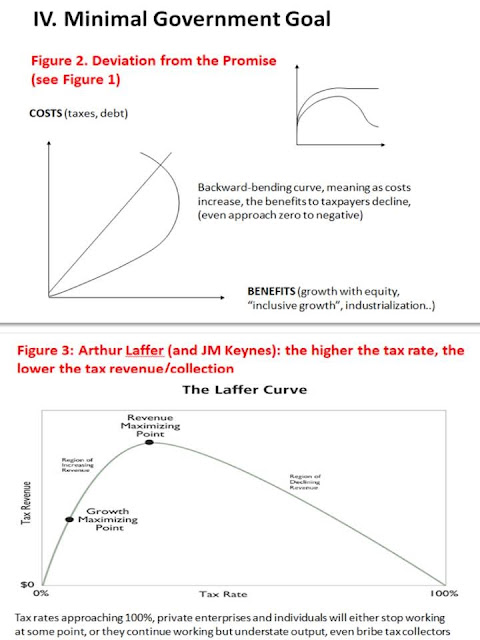 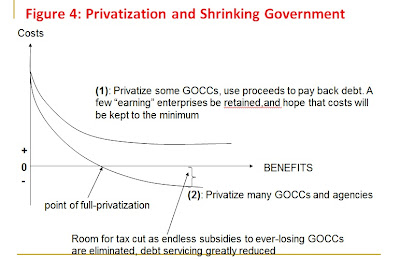 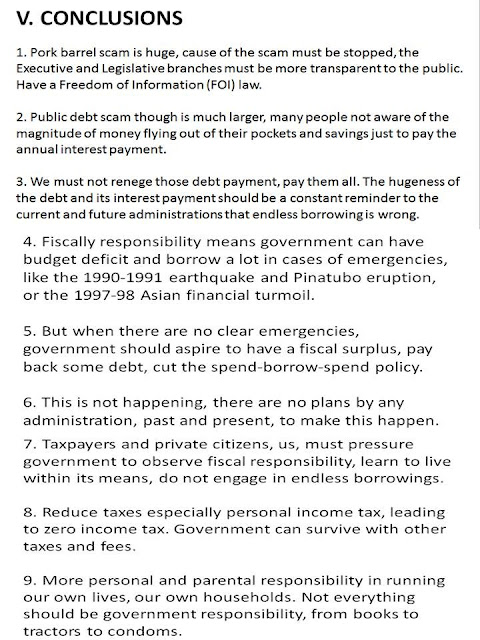 Hi, I am among the students who attended the conference and watched your presentation. Although you only lightly touched upon the issue as an aside, I am very much interested in the issue of replacing income tax.

I have heard the argument before that such a system of taxation is flawed because the rich and the well-connected can hide their income and that taxing wealth or consumption would be a better alternative of taxation in order to help close the gap between the rich and the poor. I find this school of thought very compelling and as I discussed this with my mother, an important point of argument was made which I have no answer to so now I am asking it to you:

Why should families who benefit from OFW remittances opt for wealth/consumption tax when income from OFWs already aren't taxed in their home country and introducing new forms of tax would only add burden which they didn't have before?

Another argument was also made saying that changing the system of tax wouldn't make a difference since the taxes will just be misused by government officials. What do you have to say about this?

Hi, thanks for the comments. To your questions:

2. Yes, we should go for shrinking taxes and shrinking government size and spending. The legislators and various agencies they want continued expansion of different bureaucracies, endless expansion of their budget.

Okay, so you're simply calling for the reduction of existing taxes, with the argument that the consumption-based taxes we have are already more than enough to make up for the removal of income tax? I must have misunderstood you as I thought that you were arguing to remove income tax and in its place introduce new wealth/consumption-based taxes in order to tax the rich who, as you say, are able to hide their income and evade tax.

I like to know your opinion on arguments such as this:
“The inability of the state to tax the rich is the principal cause of the wide income gap between the rich and the poor”
(from http://business.inquirer.net/132061/inability-to-tax-the-rich-blamed-for-income-gap)

Do you think this argument holds some truths -- real problems that need to be addressed by an overhaul of the tax system rather than just an overarching reduction which is what I now think you are arguing for? Or perhaps it is just a trick to manipulate the poor and the middle class into thinking the rich are the problem and not the government?

The rich pay a lot of taxes, yearly: real property tax for each house and lot, road users tax or vehicle registration tax for each car, VAT and excise tax everytime they gas up their cars, final withholding tax on their bank interest income, capital gains tax and doc stamp tax for their investments and financial transactions, corporate income tax for their companies and investments, VAT for their various luxurious consumption (they eat in fancy restos, not in turo-turo carinderia; they do their groceries in supermarkets, not in palengke and talipapa where there are no VAT) and so on.

Thank you for taking the time to clarify this issue. As you may have already noticed, this topic of great importance is, unsurprisingly, very rarely being discussed in mainstream media and what little is there that is being propagated is misinformation, as evidenced by the article I linked to.