Mining 34: EITI, Taxes and Other Costs of Regulations 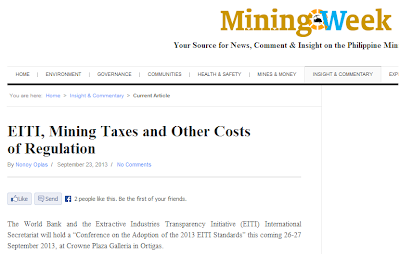 The World Bank and the Extractive Industries Transparency Initiative (EITI) International Secretariat will hold a “Conference on the Adoption of the 2013 EITI Standards” this coming 26-27 September 2013, at Crowne Plaza Galleria in Ortigas.

The World Bank is interested in this initiative mainly on the taxation aspect. The WB, along with the ADB, UN and other foreign aid, have lots of “inclusive growth” programs and projects in many developing countries, to be funded by “inclusive pockets” of course. In a recent Philippine Development Report 2013 for instance, the WB has proposed three new taxation measures. One is creating a land surtax, two is raising petroleum tax, and three is further raising the sin tax. See Why the WB report on PH jobs is alarmist, if not simplistic.

One glaring characteristic of Philippine taxation of the mining industry is the double standard applied on large scale metallic mining (LSMM) vs. small scale gold mining (SSGM). Probably almost 100 percent of all mining tax collections by the Bureau of Internal Revenue (BIR) and fees by the Bureau of Mines and Geosciences (BMG) come from LSMM + large non-metallic mining. SSGM pay only local taxes and fees to LGUs.

In the literatures by EITI International and EITI Philippines that I saw, there is very little mention about making SSGM be as transparent and accountable as LSMM. There is the implicit and wrong equation that “mining = LSMM”.

Actual costs of regulation to the private enterprises are composed of (a) cost of compliance (getting external accounting, auditing and law firms), (b) cost of “compromises” with regulators, including dealing with extortion and  special favors/requests, and (c) actual taxes and fees paid.

What is often noted is (c) only, this will be reported under the EITI system. The public do not know the costs of (a) and (b). Hence, actual costs to private enterprises are larger than what is reported.

Consider also the cost to a firm that has spent substantial amount complying with (a) national regulations (SEC, BIR and BOC, MGB-DENR, DOLE, etc.) plus (b) local regulations plus (c) social development management program (SDMP) while doing exploration and research activities, then limited operations and extraction. Then rules are suddenly changed in the middle either by the national government (like EO 79) or by the local government (like the S. Cotabato ruling on Tampakan project), and some of those players will consider pulling out or reducing the project scope, reducing also employment, SDMP, and so on.

Such costs are not likely to be captured by the EITI system as it is focused on existing operating firms.

Another cost is when a big mining firm that pays various taxes and fees is further being extorted by rebels or other armed bandits. Or worse, its expensive machineries and facilities were destroyed and burned by those groups and the government armed forces have done little or nothing to prevent such large scale destruction of properties.

I wrote/tweeted EITI Philippines last week and expressed interest to attend their conference and hopefully bring the above and other issues. They replied that “unfortunately slots for the event have already been filled. Please check our website, fb &twitter accounts for upcoming events.”


Let the EITI system become a drive to institutionalize real and meaningful transparency and accountability in the extractive sector. The system should not be used as a new harassment scheme against LSMM by the vocal and militant environmental NGOs and media that will press for more public disclosure of their data, while the same vocal and militant NGOs and media will remain silent on the non-transparency and non-accountability of SSGM. Or at least in pressuring municipal and provincial governments to apply existing environmental  regulations and revenue charges to SSGM.
-------------