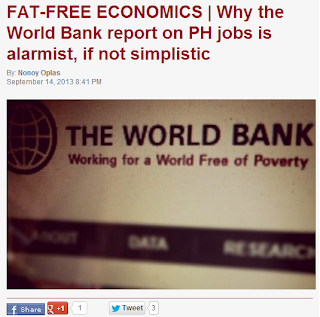 MANILA - The World Bank gave a press conference yesterday about the Philippine Development Report 2013 with the theme, “Creating More and Better Jobs.” The Bank expressed alarm that many Filipinos were either unemployed or underemployed, or had jobs but were in low productivity, low-paying work. Both conditions result in more poverty. 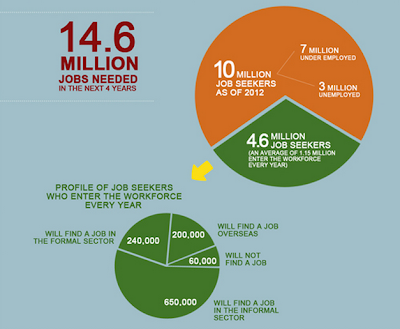 According to the Bank, some 10 million Filipinos were jobless (3 million) or had jobs but were looking for additional work (7 million) mainly to augment their income.

On top of that, about 1.15 million Filipinos would enter the labor force each year through 2016, or 4.6 million over the next four years. Of the 1.15 million new job entrants, 650,000 will find work in the informal and generally low-productivity, low-paying sector, which incidentally also comprise the bulk of the underemployed.

There is some alarmism employed in this kind of presentation.

First, not all of the unemployed are in a bad place. Many of them are unemployed by choice.  For example, there is a job offer for P20,000 a month but the person rejects it because he is awaiting a job prospect that will pay him P30,000 or more -- in short, the person has a high “reservation wage.”
Or the wage offer is good but the office is far from his house and he wants to work nearby even at a lower pay as he is helping take care of the kids or a sickly family member. There are many reasons why a person may choose to be jobless temporarily.

Second, not every underemployed person is in a bad place. A person already earning P70,000 a month and still looking for extra work that will pay an additional P30,000 is considered underemployed. The demand for extra income may arise if the person has to pay a huge housing or car loan, or some other personal or family debt, or prepare for a huge investment in the coming years.

Waving the flag of alarmism

Hence, to lump all 10 million as “job seekers” is to wave the flag of alarmism. If the “voluntary unemployment” or “unemployment by choice” plus “highly paid underemployed” were removed and segregated, the number would be less than 10 million and hence, not that high. 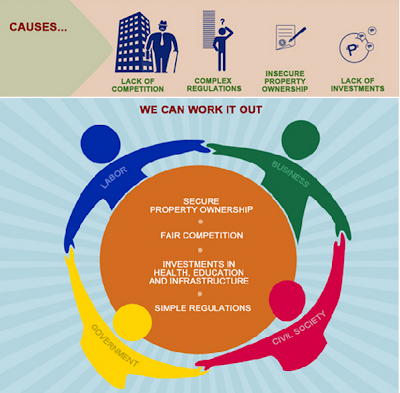 Furthermore, the Bank cited four reasons for the jobs problem, namely, lack of competition (presence of monopolies and oligopolies in certain sectors), complex and costly business regulations, insecure property rights, and lack of investments in both hard and soft infrastructure. The “we can work it out” solution the Bank proposed had identified a broad partnership of government, labor, business and civil society.


While the analysis appears sound, a quick check on the discontent among many Filipinos would turn up the following problems: government corruption, pork barrel scam, crime and lack of peace and order. In short, the Bank failed to identify an important problem: the weak implementation of the rule of law. The law against stealing and land grabbing, the law against murder and killing, the law against abduction and rape, the law against government extortion and plunder, among others.

Entrepreneurship and job creation is not a crime, and yet entrepreneurs here are penalized when they're required to secure tons of permits - from the barangay to health and sanitation, fire department, location and building, mayor's, BIR, DTI, SEC, SSS, among others. On top of that, they would have to pay various taxes, regulatory fees and mandatory social contributions.

When the cost of entrepreneurship and job creation is high and complicated, then less job creation will happen. In contrast, the cost of criminality and corruption is low, thus the prevalence of both ills. This is a big government failure.

The report outlined various reform measures and suggested how to sequence, in particular through a three-track approach:

- First track: decisively implement key reforms that can be supported by a broad coalition, do not need legislative change, and may require an executive order;

Seven sectors were identified where the three tracks would be applied: agriculture, land (crosscutting), manufacturing, business regulations, labor and social protection, Investment and public finance.
What caught my attention were the Bank's proposals in public finance, particularly in Tracks 2 and 3, where the lender suggests the following:

On track 2, instead of retaining various Customs restrictions that encourage smuggling, the more appropriate proposal would have been to reduce if not abolish some of those prohibitions. Where there is ample supply of cheaper and better quality raw materials, intermediate and capital goods, and consumer products from abroad, local producers, manufacturers and consumers would have more choices and hence, their productivity should increase. Such increase in productivity will result in new business creation or expansion of existing businesses, thus creating more and better jobs.

Bottom up budgeting is good because it expands the consultation process at the grassroots level in preparing the annual budget, but it also raises "welfarism" and subsidy dependence among citizens, thus unnecessarily jacking up public spending. And since local revenues are often not enough, more public borrowings result in forever-rising government debt, which raises the annual interest payment. For 2012-2014, the average interest payment amounts to P332 billion a year.

New taxes or raising existing taxes are troubling because they will further increase the cost of doing business and adversely affect job creation.

A national surtax on land -- on top of real property tax by LGUs -- is wrong. When land is productive – whether agricultural, residential, commercial or industrial – then this resource is used to create jobs. Job-creating land use should not be penalized with more taxes. A better alternative is to reduce or abolish the tax on productive land and shift the burden to idle land so that those landowners will be forced to make their properties productive, barring which they would the land to someone who can make it productive.

Increasing the excise tax on petroleum products is wrong. Petroleum is necessary to transport farm products, industrial goods, as well as people by sea, land and air. If petroleum products are slapped with a higher tax, then inflation would accelerate. The projected price pressure might appear small in the World Bank and Department of Finance computations but the psychological anticipation in the minds of the public might be big.

Further raising the tax on tobacco and alcohol products -- while good in principle -- should be put on hold. Such an increase may result in a marginal rise in government revenues, but may also lead to increased corruption and smuggling. The Sin Tax Law is not even a year old. Before any tinkering with the law is done, it should be allowed to deliver its promise of higher revenues. Preliminary data for the first half of the year unfortunately show that collections were lower-than-expected.

Simplification of business regulation and taxation, even reduced taxes, should apply to all private enterprises, whether big or small. A tax is a cost to doing business and to persons, regardless of the form of the levy.

Additional government revenues can be realized through privatization of certain state-owned corporations and financial institutions, whether partly or fully. PAGCOR, for instance, is projected to rake in at least P200 billion. Privatization proceeds should be used to retire part of the national debt so that it declines and interest payments drop. Savings from lower interest payment can be used for infrastructure buildup and other social services.

If people have stable jobs and businesses as a result of fewer and lower taxes, fewer government bureaucracies and regulatory fees, then the shared goal of “more and better jobs” would be attained, partly or fully.

The World Bank has to recognize that to attain many of its bleeding heart concerns, there should be less government taxation and intervention, not more