The CEO of the Institute for Democracy and Economic Affairs (IDEAS, http://ideas.org.my/), Mr. Wan Saiful Wan Jan, will speak on "The State of Democracy and Economy in Malaysia", this coming Monday, September 9, 2013, 7:30pm, at Metro Club, Rockwell, Makati City. Hosted by our Rotary Club of Taguig Fort Bonifacio, RI District 3830. This is free, open to the public, people will just pay for the meals they will order.

Wan is a friend way back in 2008. I met him first in Atlanta, USA that year during the Atlas Liberty Forum. Then Atlas VP Jo Kwong gave me a travel grant to attend that conference.

IDEAS is a big, dynamic and the only free market think tank in Malaysia. Wan is well sought in Kuala Lumpur, meeting with Cabinet Ministers and Parliamentarians on certain issues.

Wan will attend a regional conference in De La Salle University (DLSU), Manila next week, September 10-11, and since he is arriving early, I asked him to give a talk at our Rotary Club, he quickly said Yes. Wan can touch on many topics -- Sabah, petroleum economy, a heavily state-owned economy, etc. All the big TV and radio stations, big newspapers are owned by the government. Imagine that GMA7, ABS CBN2, TV5, Inquirer, PhilStar, etc. are all owned by Malacanang?

Malaysia held its first ever open, general elections only last May. The administration has faced for the first time too, a serious opposition challenge. Needless to say, the entire government machinery was mobilized to ensure that the administration would win, they did. 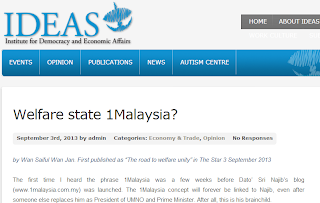 by Wan Saiful Wan Jan. First published as “The road to welfare unity” in The Star 3 September 2013

The first time I heard the phrase 1Malaysia was a few weeks before Dato’ Sri Najib’s blog (www.1malaysia.com.my) was launched. The 1Malaysia concept will forever be linked to Najib, even after someone else replaces him as President of UMNO and Prime Minister. After all, this is his brainchild.

This speech, even though delivered four years ago, is still true today. There are many people out there who would say very positive things about 1Malaysia, but if you ask them what 1Malaysia actually means, you will find that there is no one definitive answer.


If we look at the first GTP Roadmap produced by PEMANDU, chapters 3 and 4 are an attempt to translate the 1Malaysia concept into policy ideas. Among others, it says that under 1Malaysia, we will see more unity, a better quality of life, and higher standards of living through initiatives designed to improve rural basic infrastructure and provide economic opportunities for low-income households. 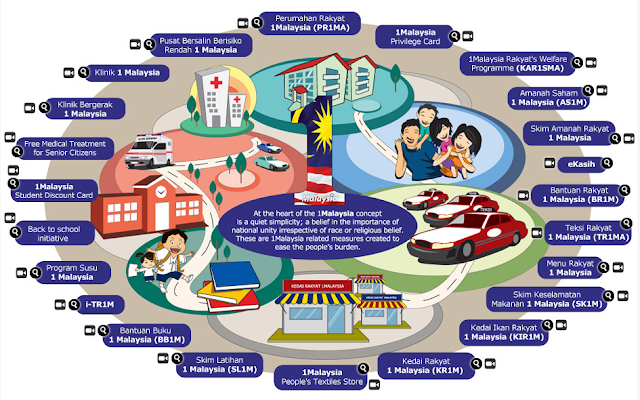 Chapter 4 is more specifically about building 1Malaysia. It discusses the challenges of managing polarities, the foundations of 1Malaysia, the initiatives to be taken to create 1Malaysia, and more.
The roadmap also states categorically that “the goal of 1Malaysia is to make Malaysia more vibrant, more productive and more competitive – and ultimately a greater nation: a nation where, it is hoped, every Malaysian perceives himself or herself as Malaysian first, and by race, religion, geographical region or socio-economic background second, and where the principles of 1Malaysia are woven into the economic, political and social fabric of society.”

To support the promotion of 1Malaysia, the Yayasan 1Malaysia was established with the well-known academic Dr Chandra Muzaffar at the helm. The foundation says that their mission is “to develop, support and spearhead activities and programmes promoting national unity.”

Now, all these sound very good indeed. If we go by the book, then it seems quite obvious that 1Malaysia is indeed about national unity.

But of course there are endless possibilities when it comes to implementation Malaysia style. After four years of defining and implementing 1Malaysia, it seems like this concept has undergone a transformation into something not directly related to national unity.

On the www.1Malaysia.com.my website, when discussing how this concept is delivered on the ground, it says “more than 1.5 million people have so far passed through the 1Malaysia health clinics, for example, receiving treatment for any condition for just one ringgit … Other rakyat-focused programmes include the 1Malaysia Housing Programme and PR1MA to help middle-income families buy their own homes, as well as the Kedai Rakyat 1Malaysia low-cost grocery stores.”

How these welfarist programmes relate to national unity is uncertain. One thing for sure, while we celebrate the 56th Merdeka, national unity remains a big, if not bigger, concern.
The united 1Malaysia that is being envisioned in all the government speeches and publications does not yet exist, and seems to be getting farther and farther.

It is also uncertain how all the welfarist 1Malaysia initiatives will “make Malaysia more vibrant, more productive and more competitive” as envisoned in the first GTP Roadmap. Welfarism rarely breeds competitiveness.

Instead what we see today, as we celebrate the 56th Merdeka, is our country gradually being turned into something that Tunku Abdul Rahman never dreamt of. Instead of becoming a united nation, we are fast becoming a welfare state.

Back on 8 January 1970, the great Tunku said that as a country, we “believe in the system of free enterprise”. But the vast majority of initiatives that carry the 1Malaysia label are geared at making the Tunku turn in his grave. Instead of nurturing free enterprise, we are nurturing a welfarist society that demands free money.

The European welfare states are already on the verge of bankruptcy after decades of welfarist policies. Trouble did not start immediately for them. In the case Greece it took more than 30 years before things go out of hand. In the UK, it was almost 100 years.

So while the welfarist 1Malaysia initiatives may not have many negative effects today, the problems will almost certainly be passed on to our grandchildren.

Malaysia is indeed a country with endless possibilities. As we celebrate the 56th Merdeka, let us make a commitment to ensure that the possibility of our future generation facing bankruptcy is not one of them.