The Lion Rock Institute (LRI), Hong Kong's first and only free market think tank, will hold its second annual round table discussion on some theoretical concepts, billed as "Reading Club Salon 2013". The first event, "Reading Club Salon 2012" was held in early November 2012, two days before the Economic Freedom Network (EFN) Asia conference which was held in another hotel in Hong Kong. I attended both events. Below, our group photo at the conclusion of the 1 1/2 days LRI event. 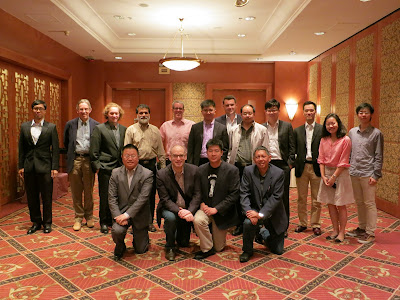 The Reading Salon is unique because (1) there are no primary or resource speakers, every participant is a speaker, and (2) all participants have to read some or all the e-books and short articles in the reading list, before they attend the discussion. A moderator introduces the topics and relevant reading materials then asks the participants to share their ideas and observations on those materials, in relation to some practical experiences and policies.

Last year, the foreign participants came from China, India, Thailand and Philippines (me). The rest of the participants are from Hong Kong, both native and expats.

This year, the theme will be Democracy -- Past, Present and Future. The announcement says,


Democracy does not mean populism. Majority does not mean truth. Standing where we are today, how do we view democracy with its legacy from the past, and projection into the future?


The Lion Rock Institute is proud to present our Annual Reading Club Salon 2013. In this event, we will investigate the topic of democracy through four sessions:

I. Athenian Democracy v. Roman Republic
II. Federalism
III. Subsidiarity
IV. A Way Out for the World – Can Democracy Survive?


The reading materials will be sent to us soon. For me, democracy can be liberating, or enslaving if the will and biases of the majority is forced upon the minority even if such programs or policies can cause harm to the minority. Especially if we keep in mind that the smallest minority, the smallest political unit in society, is the individual, not a village or a clan or a corporation.

We then must focus on the liberating aspects of democracy, and that is by providing check mechanisms that will prevent the majority to unfairly impose their will on the minority that can result in physical or economic harm on the latter. Government is force and coercion, and government almost always wave the "will and interest of the majority" mantra in justifying the use of various coercion (regulations, prohibitions, penalties, imprisonment, taxation) in society.

I like these words from Friedrich Hayek in Chapter 7, "Majority Rule" of his book, The Constitution of Liberty (1960):


Advance consists in the few convincing the many. New views must appear somewhere before they can become majority views. There is no experience of society which is not first the experience of a few individuals... It is because we normally do not know who knows best that we leave the decision to a process we do not control. But it is always from a minority acting in ways different from what the majority would describe that the majority in the end learns to do better... The imposition of the will of the majority's coercive, monopolistic, and exclusive character destroys the self-correcting forces which bring it about in a free society that mistaken efforts will be abandoned and the successful ones prevail….


The individual has little reason to fear any general laws which the majority may pass, but he has much reason to fear the rulers it may put over him to implement its directions. It is not the power which democratic assemblies can effectively wield but the powers which they hand over to the administrators charged with the achievement of particular goals that constitute the danger to individual freedom today... The most enthusiastic supporters of such unlimited powers of the majority are often those very administrators who know best that, once such powers are assumed, it will be they and not the majority who will in fact exercise them….


Democracy will remain effective only so long as government in its coercive actions confines itself to tasks that can be carried out democratically... Though democracy is probably the best form of limited government, it becomes an absurdity if it turns into unlimited government. Those who profess that democracyis all-competent and support all that the majority wants at any given moment are working for its fall.


There. Democracy can lead to limited or unlimited government. Limited government means limited coercion, like limiting and controlling the "right" to kill, stab, shoot, abduct, steal of people against other people, especially by big, organized and armed individuals and groups.

Unlimited government and coercion is wrong and evil. It means totalitarianism. Democracy guided by the rule of law must work to prevent this from happening.
------------